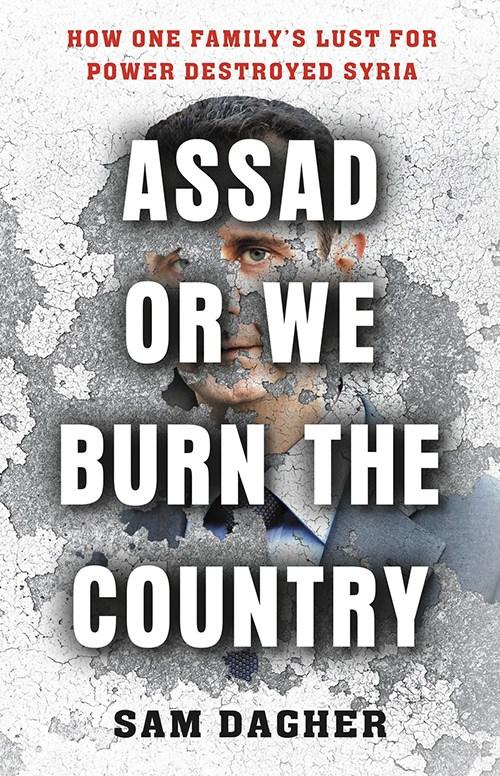 Registration for this event has closed. Please check this page for livestream information.

In the wake of a brutal civil war in Syria, millions of Syrians have fled their homes, and the dead number in the hundreds of thousands. But the ruling Assad family has survived it all.

How Bashar al-Assad and his family have managed to rule Syria for decades without releasing their grip on power is the focus of Pulitzer Prize-nominated journalist Sam Dagher’s new book, Assad or We Burn the Country: How One Family's Lust for Power Destroyed Syria. Dagher, who has written for publications including The Atlantic, the Wall Street Journal, and the New York Times, was the only non-Syrian reporter for a major Western media outlet based in Damascus from 2012 to 2014.

The conversation opened with Dagher explaining some of his book’s key points, including the title itself, which comes from the slogan that Assad’s forces often spray onto destroyed or looted homes in towns they retake. “Syrians often tell me the title of the book should be ‘Assad and we burn the country’ because he's still in power, and the country has burned and sadly is destroyed,” Dagher said.

Nevertheless, he defended his title because the phrase encapsulates the regime’s attitude so well. “This slogan captures the essence and mindset of this regime more than anything else from the moment it came to power in 1970,” Dagher said.

This mindset, cultivated over the span of half a century, helps explain why the Assad regime survived the Arab Spring, which resulted in the fall of similar dictatorships across the region.

“They've distilled it into this playbook of this manual of terror I call it that they've honed and perfected over 50 years,” Dagher said. Bashar al-Assad’s father, Hafez al-Assad, is often remembered for the 1982 Hama massacre when his troops besieged that city to quell a Muslim Brotherhood uprising against the regime. Estimates for the death toll range from 7,000 to more than 10,000 Syrians, most of them civilians.

Dagher also presents another prominent Syrian dynasty: the Tlass family. Although the father Mustafa Tlass was a loyal servant of the Assad regime as a senior military officer, his son Manaf Tlass defected in 2012 once he realized “there was a line he couldn't cross.”

Jouejati noted other important instances of continuing resistance against the regime, including the rise of civil society and the activist community

“If the Assad regime's central message is, ‘Assad or we burn the country,’ I think for the millions of Syrians who call this a revolution, our answer is, ‘We will achieve freedom or the revolution continues,’” Jouejati said.

Alzayat, on the other hand, focused on the international community’s failure to adequately respond to Assad’s atrocities.

“The behavior of the international system vis à vis these dynamics has made it sustainable, and it can go on for another 50 years or 500 years,” Alzayat said.

Lister then asked whether or not there might have been a moment when the international community might have been able to prevent or at least reduce the impact of the humanitarian disaster in Syria.

Dagher highlighted two moments in particular: when French ambassador Eric Chevalier and U.S. ambassador Robert Ford defied the regime to meet with protestors, and when Assad began a brutal attack on Homs in February 2012 on the anniversary of his father’s Hama massacre.

Pushing back, however, Jouejati pointed out that every day since the initial protests has presented an opportunity to both the regime and the international community to put an end to the crisis.

“Every day we watch atrocities being played out in real time,” Jouejati said. “So every day the world has had an opportunity to stop this and affect a different outcome. And we have failed to do that.”

The Middle East Institute (MEI) was pleased to host a book talk with Pulitzer Prize-nominated journalist Sam Dagher. In his book, Assad or We Burn the Country: How One Family's Lust for Power Destroyed Syria, Dagher traces the Assad family’s calculus in Syria, from crushing the Hama rebellion in 1982, to the construction of a brutal police state and the outbreak of civil conflict and ensuing regional destabilization. Dagher explains the current crisis by investigating the relationship between two prominent Syrian families, the Assads and the Tlasses, and delves deeply into the decision-making behind the escalation of violence and war crimes by the Assad regime.

A panel of experts discussed the ways in which the Assad regime has maintained its grip on power, even in the face of a popular uprising, international condemnation, and an 8-year regional war. Dagher was joined in conversation by MEI senior fellow Wa'el Alzayat and Rafif Jouejati, co-founder of the Free Syria Foundation, both of whom leant their perspectives to explain how the United States and the international community have failed to protect Syrians from the Assad family’s entrenchment of power.

Sam Dagher
Author, Assad or We Burn the Country: How One Family’s Lust for Power Destroyed Syria
Sam Dagher has reported in the Middle East for more than fifteen years, most recently for The Atlantic. He was the only non-Syrian reporter for a major Western media outlet based in Damascus from 2012 to 2014, a period during which he was arrested by a pro-Assad militia and briefly held in an underground mukhabarat prison. He was later expelled from Syria for reporting deemed unfavorable to the regime. He has worked for the Wall Street Journal, the New York Times, the Christian Science Monitor, and Agence France Presse, and has covered the conflict in Iraq, the Arab Spring uprisings, and Libya. The Wall Street Journal nominated Dagher's work from Syria for the Pulitzer Prize and other journalism awards.

Rafif Jouejati
Co-founder and director, Free Syria Foundation
Rafif Jouejati is the co-founder and director of the Free Syria Foundation. She has worked with a variety of Syrian groups – political, civil society, and humanitarian – to achieve common goals: expose human rights abuses, prosecute the perpetrators, bring about democratic change, and ensure equality for all in a secular Syria. She has served as a spokesperson for multiple organizations, including the Local Coordination Committees in Syria and the SOC during the Geneva II peace process. Jouejati is the director of the Foundation to Restore Equality and Education in Syria, an organization dedicated to women’s empowerment through education. She is also a member of the Syrian Women’s Political Network. She serves as a member of the board of The Day After Association in Istanbul, and as the head of the board of Baytna-Syria in Gaziantep.

Charles Lister (moderator)
Senior fellow and director, Countering Terrorism & Extremism program, MEI
Charles Lister is a senior fellow and director of the Countering Terrorism and Extremism program at the Middle East Institute. His work focuses primarily on the conflict in Syria, including as a member of the MEI-convened Syria Study Group; and on issues of terrorism and insurgency across the Levant. Prior to this, Lister was a visiting fellow at the Brookings Institution in Qatar and a senior consultant to the multinationally-backed Syria Track II Dialogue Initiative, where he managed nearly three years of intensive face-to-face engagement with the leaderships of over 100 Syrian armed opposition groups. Lister is a frequent source of briefings on the Syrian insurgency to political, military and intelligence leaderships in the United States and across Europe and the Middle East.