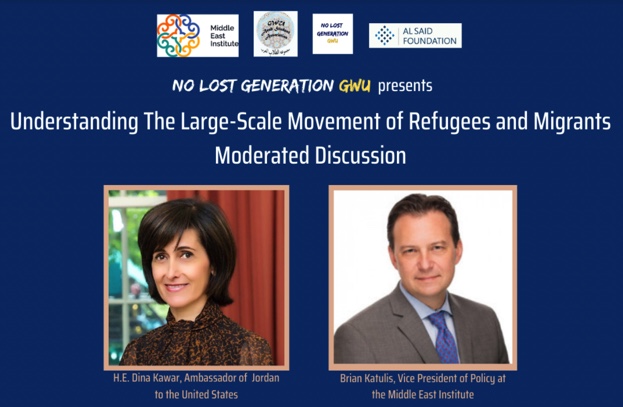 This conversation with Ambassador Dina Kawar will explore the movement of refugees and migrants across the world and the United Nations' role in serving the global refugee community. In light of current events in Ukraine and Afghanistan, international attention is once again focused on the movement of refugees, underscoring popular misperceptions about patterns of displacement and the response among stakeholders.

Ambassador Dina Kawar is the former Permanent Representative of Jordan to the United Nations. Amb. Kawar has extensive experience working with international organizations on refugee resettlement and relief. She led the Jordanian delegation during Jordan’s non-permanent membership of the United Nations Security Council from 2014 to 2015 and became the first Arab woman to preside over the Council. In February 2016, she was appointed by the President of the General Assembly as a co-facilitator for the high-level meeting of the plenary of the General Assembly on the large movement of refugees and migrants to take place in September 2016.

Brian Katulis is a senior fellow and vice president of policy at MEI. He has produced influential studies that have shaped important discussions around regional policy, often providing expert testimony to key congressional committees on his findings. Katulis has also conducted extensive research in Jordan and the region. His past experience includes work at the National Security Council and the U.S. Departments of State and Defense. In 1994 and 1995, he was a Fulbright scholar in Jordan. Katulis regularly provides commentary on leading television and radio programs, including “PBS NewsHour” and National Public Radio, and he has published articles in several leading newspapers, including The New York Times, The Washington Post, and The Wall Street Journal. He is co-author with Nancy Soderberg of The Prosperity Agenda, a book on U.S. national security published by John Wiley & Sons in 2008.