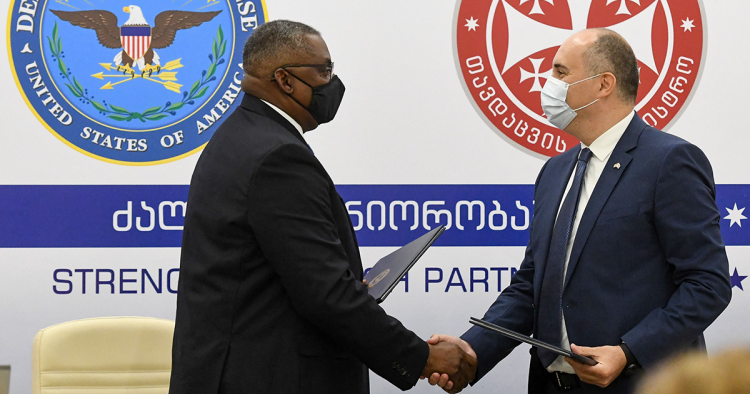 During his recent visit to Tbilisi, U.S. Defense Secretary Lloyd Austin poured cold water on the idea of American support for a so-called “3+3 format” in the South Caucasus. When asked about the proposal, he said, “I would just say that Russia, which currently occupies 20% of Georgia's territory, should focus on honoring its 2008 cease-fire commitments before promoting any new discussion platforms.”

Those advocating for a 3+3 format argue that the three countries of the South Caucasus — Georgia, Armenia, and Azerbaijan — have been linked historically, geographically, economically, and culturally to the broader region’s three bigger powers: Turkey, Russia, and Iran. While this might initially sound like a compelling argument, an important historical fact is often overlooked. Russian and Iranian, and to a lesser degree Turkish, influence and engagement in the South Caucasus over the centuries was under the auspices of imperial power. Obviously, this is not welcome today.

Proposals for regional cooperation in the South Caucasus are nothing new. Turkey first suggested a new regional format in the aftermath of last year’s Nagorno-Karabakh conflict between Armenia and Azerbaijan. But policymakers in Washington and Europe should be warned. This latest proposal will enhance Russian and Iranian influence, gradually freeze out Euro-Atlantic influence, and undermine the independence and sovereignty of the three smaller countries in the region. Regional groupings like the Turkic Council are becoming very influential, Turkey is increasingly becoming an important energy hub for Europe, and Turkey’s influence in the South Caucasus is as strong as it has been in recent memory due to Azerbaijan’s victory last year against Armenia. Even so, Turkey has been a strong advocate for the 3+3 format. Paradoxically though, this format would likely erode Turkish influence at a time when Ankara has significant clout in the South Caucasus.

For Georgia, the 3+3 format would be a non-starter, because the Kremlin would use any agreement as a validation of Moscow’s historical “privilege” in the South Caucasus. It is unfathomable that Tbilisi would willingly enter a formal regional structure that includes Russia — a country that currently occupies 20% of its internationally recognized territory. There are two reasons the 3+3 format would be bad for Georgia.

First, over time the 3+3 format will allow Russia to further undermine Georgia’s territorial integrity. As the Georgian-based think tank, the Economic Policy Research Center, wrote in a recent report that called the format “A False Choice,” the agreement would become a 3+3+2 format as Moscow continued to back the “independence” of Georgia’s Abkhazia and South Ossetia regions. Going one step further, a de facto 3+3+2 format could gradually transform into a 3+3+3 format as Russia increased its presence in parts of Nagorno-Karabakh — effectively giving the region the status of a Russian protectorate.

Second, Georgia does not need a 3+3 format because over the past quarter of a century it has already been at the heart of most of the region’s key infrastructure projects. The Baku-Tbilisi-Ceyhan pipeline and the Southern Gas Corridor are two excellent examples of this. Georgian leaders want to be a part of future infrastructure projects in the South Caucasus; however, recent history shows that Georgia can do so without allying itself with Russia or Iran.

What the U.S. should do

For the U.S., a 3+3 regional format dominated by Russia or Iran could undermine the existing enthusiasm for closer relations by freezing out the influence and presence of the Euro-Atlantic community. Therefore, the U.S. government is right not to support the 3+3 initiative and Secretary Austin was correct to make this point publicly while in the region. However, his comments need to be echoed by Secretary of State Antony Blinken and even President Joe Biden. Although one could question America’s interest in the proposed 3+3 format considering its distance from the South Caucasus, as a global power it has global interests that include stability, peace, and economic development in the region.

But the U.S. needs to start turning words into action. A good place for the U.S. to start would be by simply showing up in the region. No sitting U.S. president has visited Azerbaijan or Armenia. Only one, George W. Bush, has visited Georgia and that was 16 years ago. It is time for a change. A visit by President Biden and a few high-level American officials would send a strong message of the region’s importance to the United States. While Georgia does receive an occasional Cabinet-level visit from the U.S., the most recent one to Azerbaijan or Armenia was made by then-Secretary of State Hillary Clinton in 2012.

The U.S. should also offer political support for the construction of new regional transit and energy infrastructure that includes Armenia. Due to the frozen conflict in Nagorno-Karabakh, Armenia remains shut out of major transit projects in the region. In the aftermath of the 2020 Nagorno-Karabakh War, now is the time to build an enduring peace between Armenia and Azerbaijan. In the past, Armenians and Azerbaijanis traded with each other and lived peacefully. It is impossible to calculate how many billions of dollars in foreign direct investments the almost 30-year-old frozen conflict between two countries has cost the region. Now that there is some degree of peace and stability, the U.S. should encourage energy and infrastructure projects in the South Caucasus.

Thinking boldly and creatively, if there is genuine peace someday, and if the idea of a Trans Caspian Pipeline is realized, that could pave the way for a Turkmenistan-Azerbaijan-Armenia-Nakhchivan-Turkey gas pipeline (TAANaT). The idea would not be to compete with the Trans Adriatic Pipeline and the Trans Anatolian Pipeline, which are part of the Southern Gas Corridor. Instead, such an ambitious project could help integrate the region, build trust among old adversaries, and support Armenia with its own energy issues. While the region is years away from the diplomatic conditions that would allow such a project, the U.S. should start a discussion now on what is possible. An enduring peace between Armenia and Azerbaijan could benefit the entire South Caucasus, and the U.S. should work diligently to make this happen, through its presence and leadership in the region.

Georgia should be careful

Georgian hesitancy about joining a regional format like 3+3 is natural and it was right for Secretary Austin to express his skepticism so publicly. Georgian policymakers should recognize that there are alternatives. For example, Georgia should continue and deepen its strategic partnerships with Turkey and Azerbaijan when it comes to regional trade and energy cooperation. Georgia has been doing this for 25 years without a 3+3 format, and it can continue to do so. Tbilisi should maintain a minimum level of economic engagement with Russia and Iran. Georgia can also play a role, behind the scenes, in working for peace between Azerbaijan and Armenia.

Those who support the 3+3 format are actually pushing for a return to the days when the bigger regional powers, especially Russia and Iran, dominated the smaller countries of the South Caucasus. It would be naive to believe that a 3+3 format could ever work given Russia’s and Iran’s track record in the South Caucasus. This format would not be good for the U.S. or its partners in the region, like Georgia.

Georgia should do its best to pursue collaborative, pragmatic relationships with Azerbaijan, Armenia, and Turkey while also seeking a Transatlantic path and Euro-Atlantic integration.

The region is desperate for more U.S. engagement. Now is the time for Washington to step up to the plate.

Far from a benefactor, the Turkish government is exploiting Somalia’s fragility