7 Signs of the Death of Egyptian Politics 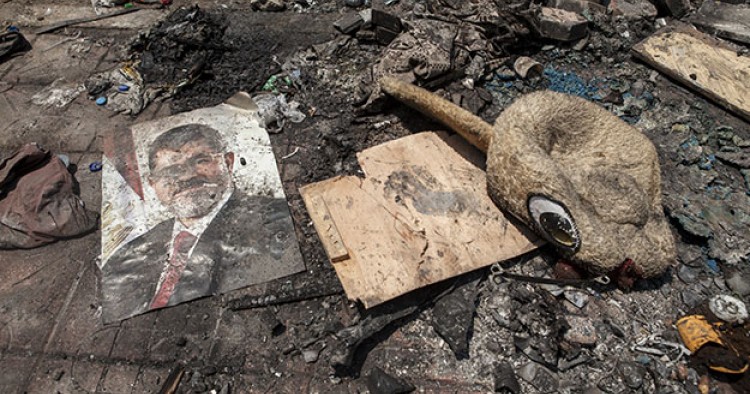 1. The current state apparatus is intent on using force to disperse sit-ins—protests that are a direct response to a genuine political crisis. Blood has been spilled; victims are being shot down. Political solutions have been willfully ignored, and so has the fact that efforts to bring about such solutions are absolutely critical, regardless of what difficulties or obstacles may stand in the way.

2. A number of sit-in protesters affiliated with the Muslim Brotherhood and their allies, as well as groups separate from the protest sites, have meanwhile become complicit in carrying out organized violence against their fellow citizens. This has included killing, blocking roads, attacking police stations and killing officers and personnel, and destroying both public and private property. The resulting turmoil is demolishing civil order and destroying the state itself, but the perpetrators believe it is the only possible reaction to the violent dispersal of the protests.

3. Influential civilians and the leaders of the parties that are currently active in Egyptian political life are supporting the use of force to disperse the protests. In doing so, they are abandoning their natural role, and their purported duty, to champion nonviolence and give priority to political solutions for the sake of protecting the lives of Egyptian men and women and for domestic peace and national cohesion.

4. Groups from within the Muslim Brotherhood and their allies on the religious right—and and/or mercenaries paid by other factions intent on shuffling the deck—are carrying out attacks on Coptic Egyptians as well as their churches and businesses. They are fueling the current political crisis by fanning the flames of sectarian hate, and threatening once more the values of coexistence and of a model of citizenship based on equal rights for all.

5. The government has fallen silent about the violence and bloodshed that has occurred during the dispersal of the sit-ins. Neither has it spoken up against the demonization of each and every protester and demonstrator, as accusations of violence committed by some are generalized to extend to all. The loss of protesters’ lives is shrugged off; their human dignity is disdained; and violation of their human rights is being tyrannically justified. All the while, the government continues to absolve security forces and the military of responsibility, and has closed the door on the demand for an independent judicial investigation.

6. The Muslim Brotherhood and its allies have also demonstrated indifference toward bloodshed, and continue to justify civil strife, fearmongering, and vandalism. Their outright rejection of both the reasoning behind the military’s intervention and the political realignments that followed June 30 was bound to result in systematic violence and the use of weapons at the sit-ins, marches, and demonstrations. And now that the Brotherhood is refusing to accept the violent dispersal of its protests, Egypt is being inevitably drawn into a grim cycle of violence.

7. All sides in the current crisis are exhausting their options. The result is continued escalation: the use of force to break up protests, and the reactionary violence that follows.

The tribulations facing Egypt today are wasting opportunities to establish common ground and to seek the political solutions that could deliver the Egyptian nation from the dangers of violence, conflict, and deeply entrenched polarization.

They are destroying the likelihood of a nationwide human conscience, guided by wisdom and reason, that could search for such common ground and political solutions—solutions that are impossible unless supported by condemnations of violence and of human rights violations, by the implementation of transitional justice, so that those implicated in such violations can be held accountable, and by commitments to nonviolence as well as to transparency in public and political matters. All this can only occur within a framework of citizenship and equality, and once the destruction of domestic peace and state institutions has been stopped and disavowed.

And they are ruining the practical capacity of voices of conscience and reason to find common ground and achieve political solutions that will be met with public acceptance and legitimacy in the eyes of Egyptian society.

But the solutions we need have never been so far out of reach.

This piece originally ran in al-Shorouk.

Translated from the Arabic by Anny Gaul.