After Warsaw is there a future for the Arab Peace Initiative? 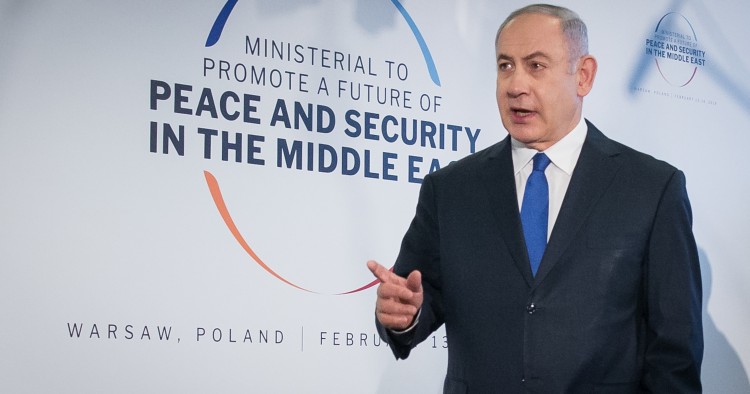 Washington devised the recent Middle East summit in Warsaw, officially known as the “Ministerial to Promote a Future of Peace and Security in the Middle East,” in the hope of mobilizing a broad front against Iran. In the end though, it was Israeli Prime Minister Benjamin Netanyahu who reaped the greatest reward. Not only does he have the satisfaction of seeing the Trump administration, in contrast to that of Obama, wholeheartedly adopt his international campaign against Iran as its own, but he can also claim to have made more headway on reaching an accommodation with the Arab world independent of the continuing stalemate on Palestine than any of his predecessors.

Although it met with decidedly mixed success, the Warsaw meeting was intended by the Trump administration as a declaration of international solidarity against Iran following the defeat of ISIS’s territorial caliphate. Prime Minister Netanyahu, like the half dozen Arab ministers who attended the summit, needed no encouragement on this score.

But Israel’s long-serving prime minister did herald the joint presence of Israeli and Arab officials as a path-breaking example of the success of what U.S. experts have taken to calling the “outside in” strategy — that Israel’s relations with the Arab world can mature without being constrained by the interminable dispute over Palestine.

In remarks made at a closed-door session during the conference, Netanyahu acknowledged that, “For Israel to be at peace or normalize relations with the broader Arab world, we must have Israel and Palestinian peace.” However, he added, “Since peace was not forthcoming, we were stuck with no options.”

The era of no options, the prime minister continued, is over. Stalemate with the Palestinians, and continuing occupation of the West Bank and East Jerusalem, is no longer the constraint upon ties with Arabs and Muslims that it once was.

According to Netanyahu, Arab participants at the Warsaw summit “said, ‘yes, we want to solve the Israeli-Palestinian problem, but it cannot be solved unless we roll back Iran’s aggression.’” Checkmate.

“There is a dramatic change,” explained Netanyahu to a Feb. 18 meeting of the Conference of Presidents of Major Jewish Organizations. “Most of the Arab countries no longer view Israel as their enemy, but view Israel as their indispensable ally against ... the two streams of militant Islam.”

There has always been something artificial about the public estrangement between Israel and its Arab neighbors. The rejectionism of the seminal Khartoum Conference, convened after the disastrous Arab defeat in June 1967, embodied the refusal of Arabs to recognize, negotiate, or make peace with Israel. But it failed to take account of the intricate web of relations stretching back to the meetings between Chaim Weizmann and Emir Faisal in 1919 and the secret diplomacy between Israel and its neighbors, from talks with Jordan, Syria, and Lebanon in the 1940s through, most recently, the security understandings with Egypt and Saudi Arabia regarding the Red Sea islands Tiran and Sanafir in 2017.

In recent decades Israel has made real and visible progress in its relations with Arab states, in terms of public diplomacy, economic ties, and regional security. Israel’s peace treaties with Jordan (1994) and Egypt (1979) stand as the foremost examples of the failure of the rejectionism of the Khartoum Resolution when confronted by the more nuanced power of raison d’état.

But these achievements, together with others made during the period between the convening of the Madrid Conference in October 1991 and the end of the multilateral track discussions after the second intifada in October 2000, took place in the context of dynamic diplomatic initiatives, that whatever their shortcomings, represented a serious effort to address the Israeli-Palestinian conflict. As long as Israel and the PLO were talking on the “inside” track, incremental progress on the “outside” aroused little opposition.

Today, however, Palestine is a diplomatic desert, more barren than at any time since the June 1967 war. In addition, Israel is in a slow-motion conflict with Syria, characterized by regular armed cross-border attacks, and an ever-fragile war of words with Hezbollah.

As Netanyahu heads into the April elections, Israel’s policy of occupation, having passed the half-century mark, is all but absent from the national political debate.

But an end to occupation is at the heart of the Arab Peace Initiative (API), which, since its introduction in 1982 as the Fahd Plan by the Saudi crown prince, has held out the prize of Arab recognition of Israel in return for the creation of a Palestinian state with East Jerusalem as its capital.

However, never have the advantages promised Israel by the API been closer, at a moment when the “costs” to be borne by it are so distant.

Why then choose this moment to bring the API out of mothballs — as Prince Turki bin Faisal al-Saud did in an extraordinary interview on Israel TV — at the very time when Netanyahu was in Warsaw claiming victory over the API and celebrating its demise?

The former director of Saudi intelligence and ambassador to the U.S. and U.K., Turki was tasked by King Salman with offering a more sober assessment to Israelis intoxicated by the prospect of keeping the West Bank, Jerusalem, and ever-closer relations with Riyadh.

When asked what the policy of the Trump administration should be, Turki said simply, “The Arab Peace Initiative — take it on. Make it yours.”

But the very fact of Turki’s unprecedented public appearance on Israeli television, even if it was aimed at conveying a public warning that, for Israel, the fruits of the API require the creation of a Palestinian state, may well be viewed in Jerusalem (and Washington) as further evidence that the API is indeed passé.

Geoffrey Aronson is a non-resident scholar at MEI. He writes about Middle East affairs and consults with a variety of public and private institutions dealing with regional political, security, and development issues. The views he expresses are strictly his own.