Against Erasures: Memory and Loss in the Art of Emily Jacir and Eman Haram 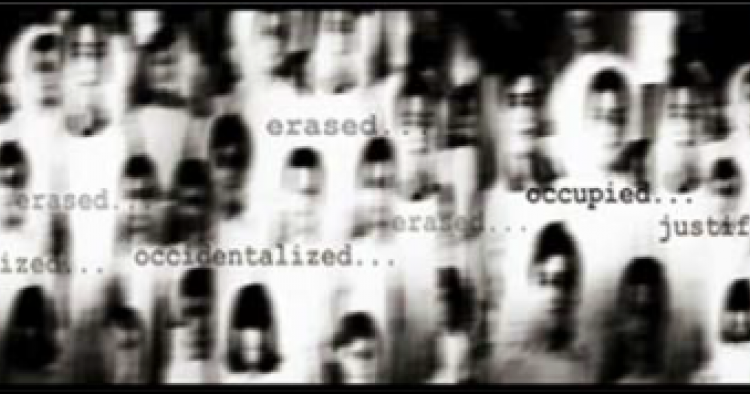 The visual art of Emily Jacir, “Where We Come From” (2003), and Eman Haram’s photo exhibit, “Involuntary Memory” (2006), inscribe a memory that resists the systematic effacement of collective history, and a loss inherent in any displacement.[1] It is a memory that is intimate and plural, fluid and performative, and that spans many displacements and transformations. Rather than preserving a memory of what was, loss emerges in their work as continuous, not an event passed. Memory, however, rooted in the present, opens onto a future. Through different media, their work becomes a conscious intervention to counter such historical erasure and violent fragmentation. A dynamic search for form that could speak to the loss reveals how the political need not be at odds with the aesthetic. The human dimension of loss transcends any particular identity in their work without eliding the historical.

Palestinian artists are creating new transnational networks, languages, and identities in the way they employ mass culture, performance art, and media. Their art is in turn pluralized by this use. It is a cultural expression marked by unique images and language. Like the poems of Mahmoud Darwish and the stories of Ghassan Kanafani, this art resists the erasure of Palestinian history, but it ultimately transforms and reinvents tradition through medium, image, and language. It also transforms prevalent notions of identity and of belonging. Henceforth, “dislocations felt by displaced subjects towards disrupted histories and to shifting and transient national identities” will constitute this belonging.[2] As exilic identities, they are “constantly producing and reproducing themselves anew, through transformations and difference.”[3]

In the past decade, Palestinian esthetic production — local and diasporic — has gained increasing visibility and recognition on the international scene. (Emily Jacir’s prestigious Hugo Boss Prize in 2008 and Sharif Waked’s exhibits in the Tate Modern and the Guggenheim are but the latest examples). This attention is testimony to the innovations of young artists and is crucial to the dissemination of an artistic experience that has historically remained on the margins. It also points to a wider and more extensive experimentation that is taking place in the Palestinian cultural scene. Have the 1990s heralded a new period of creativity in the wake of Oslo, and “as a result of the decentralization of the Palestinian political scene,” as Ilan Pappé argues?[4] Kamal Boullata notes the number of women among the leading innovators and points to the challenges of tracing developments in Palestinian art “across disconnected territories and different cultural environments.”[5]

Marked by its diversity, whereby dispersal and rupture, which began in 1948, become points of inscription, this esthetic corpus does not relate a unified story of the Palestinian experience. While each artist interrogates identity in a unique manner, it is the negotiation of the personal and the collective, the historic and the esthetic that they seem to share.[6] This diversity also manifests itself in the use of the medium, in the creation of a new language in the visual work of art (photography, spatial installation, video, personal performance). Boullata argues, however, that “memory of place” unites Palestinian artists of the post-Nakba period, despite their dispersal.[7] More than individual visions, this art has incorporated aspects of global culture to affirm its national belonging as it addresses Western audiences and as it remains deeply rooted in Palestinian life. More importantly, Palestinian identity is revealed in these works as plural and dynamic.

Emily Jacir’s “Where We Come From” speaks of the fundamental link of memory and loss, life and art, the collective exile and the personal displacement: It is “coming from my experience of spending my whole life going back and forth between Palestine and other parts of the world.”[8] “Where We Come From” performs both the displacement of Palestinians and the restrictions on their movement. The artist herself, an American citizen, is able to travel. In this work, she carries out personal requests of Palestinians who cannot go home, or cannot cross certain borders of their country to see friends or family, who ask her to visit particular places and people dear to them. In documenting her visits in photographs, she reveals the absurd and abject circumstances in which Palestinians often find themselves, conditions in which they lack freedom of movement among others. She states: “I have seen the deliberate fragmentation of our lands and the isolation of our people from each other by the Israelis. This is an extreme form of violence. For me, this piece was a dialogue between ourselves across these artificial islands and borders that have been created. I conceived of this piece for Palestine.”[9] Her photos reflect the dispersion that she tries to overcome: Images of absence mark incomplete lives, and yet they create links with others.[10]

One such wish is from Jihad, identified in an Arabic-English bilingual text as “Born in Shati Refugee Camp, Gaza City/Living in Ramallah/Gazan I.D. card/Father and mother from Asdud/ (exiled in 1948).” The text reads: “Visit my mother, hug and kiss her … Visit the sea at sunset and smell it for me and walk a bit … enough. Am I greedy?… I left Gaza for Ramallah in 1995 and cannot go back. I also cannot move to any place in the West Bank because of the Israeli restrictions.” A note is included at the bottom describing the visit, how they had tea, how the mother inquired after Jihad. The color image next to the text shows the back of the artist as she holds and kisses the mother who is closer to the viewer.[11]

Jacir’s work testifies to irrecoverable loss and to a belonging that persists against all fragmentation. Ultimately her images are a “memorial to untold stories:”[12] “anti-images, unspectacular private pictures,” “a self-portrait which also speaks collectively of a people,” a “personal archive as a proxy for the disappearing archives of Palestine.”[13] The artist nonetheless recognizes certain paradoxes of her art project: “Where We Come From is a failure in some way. I am not sure how to reconcile the notion that non-Palestinians are being entertained by our sorrows and dreams.”[14] Yet, consequently, she is no longer allowed to go to Gaza and to certain parts of the West Bank: “Jacir could not create this work today.”[15]

Eman Haram’s “Involuntary Memory” also ruminates on the process of loss, but as erasure — sometimes due to the nature of memory but more significantly as historical effacements, a process where memory nonetheless also persists. Involuntary memory represents “the more indirect and deep sense of personal experience (times, places, feelings, and situations) that are not subject to immediate recall but instead are involuntarily triggered by objects or events associated with that experience.”[16] Calling her photographic experiments “ongoing explorations,” and “disconnected lives,” Haram suggests in this series how history is intimately at the heart of her art, where the self also issues forth a collective experience, where memory recalls a forgetting. Her photos expose the effacement, and by so doing also resist it.

“Untitled” (composite digital photo, 2006) uses language in conjunction with image to clearly evoke historical erasures of identity, of the past, of collectivities. The fading, blurred images of faces recall the inscription of effacement. The black and white seems to evoke the past, as the image’s grainy quality evokes a negative of a receding original. The words too are faded, to differing degrees: “colonized” and “erased” alluding to the past, while “occidentalized,” “occupied,” and “justified” in bold, suggest the present. The word “erased” echoes with each historical violence named. An accusation and a judgment frame the words, “colonized. Erased … Occidentalized … erased … erased … occupied … justified.” Language provokes, by what remains essentially unsaid. The rhythm of language coincides with the image and forcefully drills against that vanishing. Just like the suspension points, the image remains an overture rather than a foreclosed conclusion. The English words target an audience. The word “occidentalized” is used rather than “westernized,” which is an anglicized rendition of the French word. Such use further performs this process of erasure in the layering of identities: The Palestinian-American artist now living in Francophone Montreal (having lived previously in the United States, Syria, and Lebanon) has been further estranged from the English she uses. The artist’s language occupies the position of “in-between” many languages, revealing a critical posture, and “the continuous quest for a language of self-expression.”[17]

“All the Erased Faces Haunt my Remembrances” (2006, constructed digital photo) reveals the blurred images of women’s faces turned to the viewer as they advance forward. In contrasting black forms to white headscarves, the remembrances have clearly turned to haunting, and the group of passersby strangely inhabit the self. The haunting of collectivities in both images are projections of the intimate self, the past that continues to inhabit the present. The haunting of that which should no longer be there seems to work counter to the erasure, even while defining its nature (i.e. that the haunting is that of all erasures of selves, whether political or social). The encompassing “all” embraces a collectivity of women without losing the singularity of the self.

In “Erasures” (composite digital photo, 2007), schoolgirls are photographed from the shoulders down, in uniform clothes and postures. As education is primarily concerned with the mind, the absence of heads implies effacement by a process of education. As in the artist’s history of growing up attending a Protestant school, education is linked to Western missions. The x-ray dimension of the image exemplifies a photographic exploration of the self where the object becomes elusive. Memory captures a searing image. One panel bordered and colored arbitrarily marks a self.

“Erase the oblivion” (2006, constructed digital photo) presents a likely family photo, and a seemingly natural process of fading away juxtaposed to the torn borders between the women, as if in panels, and the angst of the appeal to “erase the oblivion.” The series seems to enumerate various erasures — from the historical and the social to the seemingly natural — that occupy the self.

Uneasy with solely political interpretation of their work, Palestinian artists also resist the eliding of its political dimensions.  While art may contribute to healing social and historical wounds, both artists are vigilant to the way art can be easily recuperated for the enjoyment of others without registering the protest.[18] This art has in its very constitution challenged such recuperations. In Edward Said’s words, this art becomes a “defiant memory,” “unwilling to let go of the past,” while being marked by change. It is devoid of “sentimental homecoming,” reflecting “a state of lucid exile,” that “offers neither rest nor respite.”[19]

[7]. See Ankori, Palestinian Art, pp. 21, 18. Narratives about Palestinian art tend to locate its beginning in 1948, although many acknowledge that a vibrant art movement existed before the Nakba and is now difficult to trace.

[18]. For a discussion on the co-option of Palestinian art, see Yara al-Ghadban, “The Ghost in the Art Work,” blog post by Johannesburg Workshop in Theory and Criticism Blog, September 10, 2009, http://jhbwtc.blogspot.com.