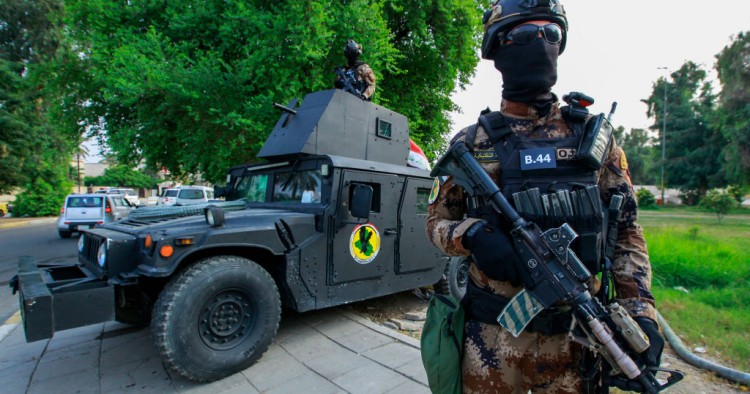 Late on June 25, the Iraqi Counter Terrorism Service (CTS) carried out an operation against Kataib Hezbollah (KH), a powerful Iran-backed militia, in the suburbs of Baghdad, detaining militiamen, confiscating mobile Katyusha rocket launchers, and accusing the group of plotting another round of rocket attacks targeting the Green Zone and Baghdad International Airport. According to preliminary government statements, the CTS rounded up 14 members of KH along with one “foreign national” (a term widely understood by Iraqis to mean an Iranian).

Both Prime Minister Mustafa al-Kadhimi and the militia resorted to unofficial statements and leaked information to spread their account of the al-Dora raid, providing conflicting and contradictory reports about the number of detainees and their whereabouts. In response, KH marched into the Green Zone in a show of force and made threats to retaliate should the detainees not be released. The detainees were subsequently transferred to the security branch of the Popular Mobilization Forces (PMF) Commission, and according to conflicting reports published on June 29 and 30, either some or all of them were released. A spokesman for the U.S.-led coalition in Iraq has also denied a statement by a government official that the arrested leaders were handed over to the U.S. military.

The raid comes at a time when the situation in Iraq is deteriorating severely on a number of fronts, from politics and the economy to service delivery and health care. The issue of the militias is a central one, as their actions and transnational allegiances have undermined Iraq’s sovereignty and the credibility of its government. Amid these massive and mounting challenges, Iraqis have grown deeply concerned about the pandemic and Iran’s continuous exploitation of Iraqi resources, as well as issues in the public sector, including delays and possible cuts in salaries. As a result, al-Kadhimi had to do something significant, and quickly, to regain public trust in his new cabinet and his planned reforms.[1] It was imperative for the government to shore up its legitimacy by consolidating the power of the state’s security apparatus and neutralizing malign transnational non-state actors.

This is especially important for al-Kadhimi’s cabinet because it lacks a parliamentary bloc to provide support when it takes actions like advancing difficult reforms and moving to contain Iranian exploitation of Iraqi resources. To that end, the new government needs popular support to overcome the political and military challenges presented by pro-Iranian factions in the Council of Representatives (COR), the militias, and critical government institutions. Al-Kadhimi must build political capital and social trust in the new cabinet, and this can only be attained through quick and bold actions. Upon assuming power, the PM made some initial populist moves, like visiting the Public Pensions Department and talking about differences in salaries, but they did not increase Iraqis’ trust or reduce their skepticism of the cabinet’s ability to counter the powerful corruption networks and pro-Iranian factions within Iraq’s institutions. On the contrary, miscalculations like the decision to cut retirees’ pensions exposed the cabinet’s vulnerability vis-à-vis pro-Iranian populist factions.

In most other contexts, it would be too early to evaluate a government that’s just a month old; however, in the case of Iraq, the public expects rapid action to address the mushrooming of the malign transnational militias that exploit Iraqi resources — an issue that has taken on growing urgency amid the current dire economic situation and the COVID-19 pandemic. Al-Kadhimi calculated that the slower the cabinet proceeds, the more difficult it would be for the government to regain legitimacy. Iraqis still have fresh memories of former PM Haider al-Abadi’s government, which had the support of the Marjya,[2] the public, and the international community, yet failed to take concrete actions and lost the opportunity to restore the government’s credibility. The current gap in social trust cannot be bridged by half steps, and al-Kadhimi could not wait until his cabinet strengthened its political position vis-à-vis the pro-Iranian factions. He needed to seize the momentum and capitalize on public support, the Marjya’s statements, and the urgent need to save Iraq’s collapsing economy and tackle the COVID-19 crisis. Therefore, it was important for al-Kadhimi to conduct a surgical operation against the militias.

The al-Dora raid and its aftermath

Following the popular demonstrations that erupted in October 2019, the CTS raid against KH represents a second turning point in Iraq. First, the selection of KH specifically was an important decision. It is a powerful militia and has boasted publicly about its military capabilities and allegiance to Iran’s supreme leader. It is also one of the PM’s staunchest enemies and strongly opposed his nomination. Second, the reaction to the raid among the public and moderate forces has revealed a fierce anti-Iranian sentiment, which was clearly exhibited during the popular protests of October 2019 when protesters set fire to the Iranian consulates in Najaf and Karbala and more broadly voiced their objections to Iran’s penetration of the Iraqi state and institutions. Additionally, Iraqis showed strong support for the CTS, which in turn has increased al-Kadhimi’s popularity. Third, and despite the pro-Iranian factions’ strategy of flooding social media with opposing narratives and threats against the PM, Iraqis instead filled these platforms with posts celebrating the raid and hailing the CTS as heroes. Fourth, the episode also highlighted the strength of the PM’s media strategy, an important tool that will be crucial in his upcoming decisions and actions. Fifth and perhaps most importantly, Iran has refrained from publishing official statements or leaking unofficial ones against these developments. It is clear that Tehran’s desperate need for the economic lifeline that Iraq represents has obliged it to avoid further escalation. In a similar vein, and despite the populist rhetoric, the statement put out by the al-Fatih list[3] on June 29 focused on the need to hold early elections as a means of removing al-Kadhimi from his position.

Nevertheless, the aftermath of the incident demonstrates how challenging it is to take on the militias in Iraq. In response to the raid, KH put on a sizable show of force and entered the Green Zone, while none of the military checkpoints and security forces in the area tried to stop them. Furthermore, the majority of the detainees were released just a few days later, even though the CTS announced that they had captured them in possession of mobile rocket launchers. The recent operation also revealed the depth of the fragmentation among Shi’a parties. While politicians from al-Fatih were unwavering in their statements against the raid, al-Nasr, headed by Haider al-Abadi, and Hikma, headed by Ammar al-Hakim, were not opposed. Nouri al-Maliki tweeted a vague position supporting both the PMF and the government,[4] while the Sairoon bloc, headed by Muqtada al-Sadr, has not yet revealed a clear position. KH, by contrast, continues to issue inflammatory statements severely undermining the PM, with the head of the militia’s security apparatus, Abu Ali al-Askari, suggesting in a tweet on June 29 that following mediation by domestic and foreign actors (i.e. Iran), the PM had promised not to carry out any further operations and that those detained in the raid were about to be released.

Al-Kadhimi’s decision to launch the raid and detain the militia members is an important step toward re-establishing the Iraqi government’s credibility, regaining its legitimacy, and restoring state sovereignty. However, this step must be supported by a set of actions that are just as important and critical as the raid itself. The PM should address the root problem of Iranian exploitation and Tehran’s use of political and bureaucratic operatives in key Iraqi institutions. While the PM has already issued an order instructing all ministries and government agencies to stop appointing or changing directors general or any other high level government positions, it is not yet clear whether al-Kadhimi will be able to move forward with such decisions in the aftermath of the raid.

Extending the government’s control over border crossings and smuggling routes, especially those with Iran, will be another important step moving forward. The scale of the revenues lost as a result of the failure of previous governments to rein in the militias’ control of border crossings and custom agencies has been widely reported. According to recent reports, Iraq imported $9 billion worth of goods from Iran between 2018 and 2019, up from $6.5 billion a year earlier, meaning Iraq accounted for 20 percent of Iran’s total exports and was the number two destination for Iranian non-oil goods exports. In addition, Iraq’s gas and electricity imports now account for up to 30 to 40 percent of its electrical power supply. The chairman of the Iran-Iraq Chamber of Commerce puts the value of this gas at around $3.5 billion per year, and estimates that Iran exports 1200 to 1500 MW of electricity per day to Iraq, or close to $700 million a year. Going forward, the PM will need to keep strengthening his media strategy, disclosing the mismanagement and corruption in these sectors and linking it to the current severe financial hardship Iraq is facing in order to consolidate public support.

While the challenges are indeed huge, al-Kadhimi and his cabinet enjoy significant public, regional,[5] and international support — especially from the United States. Such backing will be crucial in helping Iraq to manage the twin challenges of COVID-19 and the current economic crisis, as well as empowering the PM to continue his reform efforts. Al-Kadhimi understands that he has to act now to maintain the momentum — otherwise Iraq may lose what could be its last chance to save the country.

Shahla Al-Kli is a non-resident scholar at the Middle East Institute and an expert in international development and political economy. The views expressed in this piece are her own.

[1] The Iraqi Council of Representatives (COR) confirmed the remaining seven ministers in PM al-Kadhimi’s cabinet on June 6, 2020. The newly confirmed ministers were the Ministers of Oil, Foreign Affairs, Trade, Culture, Justice, Agriculture, and Migration and Displacement. While finalizing the cabinet took a about month, having a fully functioning government within weeks of swearing in the new PM had not happened in Iraqi politics in years.

[2] Marjya is the Shi’a jurisprudence and represents the Shi’a religious authority. There are two main Marjyas for Shi’as in the world. The Iraqi Shi’a Marjya is represented by Najaf’s seminary, commonly termed al-hawza al-‘ilmiyya — “the enclosure of learning” in Arabic. Several senior grand ayatollahs constitute the Hawza, and Ali al-Sistani is the grand ayatollah who heads the seminary and present the Marjya’s religious instructions and positions about political and governance issues. The Iraqi Marjya is the biggest and has followers across the world. The second Shi’a Marjya is Qom, in Iran, with followers mainly from India, Lebanon, and Pakistan. The Iraqi Shi’a Marjya differs from the Iranian one in that it does not approve a political role for religious leaders, while the Iranian Marjya adopted Ayatollah Ruhollah Khomeini’s doctrine of Wilayat-Faqih (the “Rule of Jurisprudence” in Arabic). https://www-tandfonline-com.ezproxy.library.tufts.edu/doi/pdf/10.1080/00263200701568220?needAccess=true

[3] There are two major parliamentary blocs in the new COR, neither of which was able to create the largest parliamentary bloc. These two are Sadr’s Islah ("reform" in Arabic) and Amiri’s Bina’a ("reconstruction" in Arabic) blocs. The Bina’a bloc is made up of Amiri’s PMF/Hashed Fatih and Maliki’s State of Law lists; Sunnis who represent the National Axis, led by Khamis al-Khanjar; and the pro-PMF/Hashed Christian Babylon list, led by Ryan Keldani.

[5] The support of the Arab countries is important to help Iraq tackle its financial crisis, especially, the Gulf States, Saudi Arabia, Jordan, and Egypt.