Al-Qaeda in the Indian Subcontinent (AQIS): Renewing Efforts in India 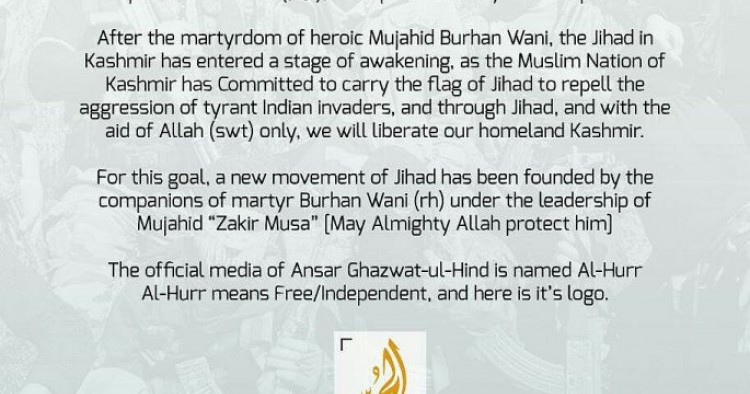 On September 4, 2014 Al-Qaeda Central (AQC) announced the formation of a new regional affiliate called “Qaedat al-Jihad fi’shibhi al-qarrat al-Hindiya,” or Al-Qaeda in the Indian Subcontinent (AQIS).[1] The founding of AQIS as an umbrella organization for various jihadist groups operating in South Asia — just three months after the Islamic State (IS) had declared an Islamic “caliphate” in areas straddling Iraq and Syria over which it had gained control — raised concerns within the Indian security establishment regarding a possible escalation of the jihadist threat to the country.[2] AQIS has recently been ramping up its efforts to increase its presence in India. This article examines AQIS’ renewed ambitions and activities in India.

Al-Qaeda has long considered India to be an enemy state.[3] However, a document titled “Code of conduct for Mujahideen in the subcontinent,” released in June 2017, highlights Al-Qaeda’s sharpened focus on the Indian subcontinent, details its objectives in doing so, and identifies the police and intelligence agencies, the leadership of Hindu organizations, Indian military personnel, and blasphemers of the Prophet as targets.[4]

Al-Qaeda has used a slew of reasons to rationalize its designation of India as a target.

Al-Qaeda has used a slew of reasons to rationalize its designation of India as a target. First, it refers to the oppressive policies of the Indian state toward Kashmiri Muslims. Second, it criticizes India for promoting secular ideologies in Bangladesh, through its support for Prime Minister Sheikh Hasina’s policies. Third, it plays the external enemy card by underscoring India’s alliance with the United States, Russia, and Israel — all of which it holds responsible for trying to suppress the jihadist movement in the region. Fourth, it highlights India’s withholding water from Bangladesh, depicting such actions as part of an overall effort to assert Indian dominance over the Muslims of Bengal. Finally, in a selective reading of  history, it points to the presence of Muslim rulers in India for close to a millennium, surmising it as a reason to repossess the nation once again.[5]

Interestingly, while AQIS names the Indian government as a target due to its engagement in Bangladesh, it neither paints a bull’s eye on Indian personnel in Afghanistan nor mentions Indian involvement in Afghanistan, perhaps indicating a reluctance to encroach on Taliban territory.

A significant part of Al-Qaeda’s recent rhetoric has concentrated on Kashmir, a core issue of dispute in the decades-long Indo-Pakistan conflict. It is important to note that Al-Qaeda’s first attempts to internationalize the dispute took place in 1996 when Osama Bin Laden mentioned Kashmir in a speech.[6] Al-Qaeda’s subsequent attempts to make inroads into the Kashmir Valley, however, were unsuccessful. In 2002, Bin Laden was suspected of having taken refuge in the region, and Al-Qaeda claimed it had a presence there. Yet, such suspicions and claims were later shown to be false. [7]

Al-Qaeda sought to exploit the Kashmir issue repeatedly in 2014 and 2016 as a means of bolstering its ranks in the region. A 2014 Al-Qaeda video, for example, warned of terror spreading across the Kashmir region and urged Kashmiri Muslims to wage jihad against India.[8] In the wake of protests in Jammu and Kashmir in July 2016, AQIS issued a message aimed at inciting jihad among Kashmiri Muslims.[9] In June 2017, Zakir Musa, the erstwhile commander of the Kashmiri secessionist group Hizbul Mujahideen, reportedly defected to Al-Qaeda. Recounting injustices heaped on Indian Muslims, Musa exhorted them to join the Jihad in Kashmir and instructed them to drape the bodies of dead with Islamist, rather than Pakistani flags, to signal a shift away from a nationalist to a pan-Islamist agenda.[10]

Later, with the blessing of Al-Qaeda Central, Zakir Musa created a new group called “Ansar Ghazwat-ul-Hind” (Helpers of the Conquest of India), the first Al-Qaeda branch in Kashmir in over three decades.[11] Security forces acted quickly, eliminating one of the major leaders of the group, Abu Dujana in August 2017.[12] Kashmir police have reported that, of 250 suspected militants in the region, only about a dozen have joined Ansar Ghazwat-ul-Hind, which provides some indication that the group has a rather weak appeal in the conflict-ridden valley.[13]

The relatively small number of foreign jihadists operating in Indian Kashmir could be attributable to one or a combination of the following factors: 1) the government’s role in enabling the safe passage of foreign fighters, 2) the lack of acceptance accorded by the local population to foreign fighters, and 3) the prospective foreign fighters’ chances of winning the conflict/returning alive.[14] In fact, local resistance leaders have repeatedly rejected the role of Al-Qaeda in Kashmir, characterizing their struggle as a purely indigenous movement with no global agenda,[15] despite nearly daily instances of violence in recent months.[16] Additionally, parallel efforts by Indian and Pakistani security services in recent years have proven effective in preventing foreign jihadists from entering the Kashmir Valley.[17] Furthermore, AQIS has accused Pakistan of betraying Kashmiri Muslims, implicitly ruling out developing a relationship that might enhance its prospects in Kashmir.[18] For all of these reasons, AQIS has thus far remained a marginal actor in Kashmir.

Nor has Al-Qaeda gained traction in the rest of the country. Since its inception in 2014, AQIS has not orchestrated any major attacks in India. Despite AQIS’ call for lone wolf attacks in India, there have been no reports of jihadists taking up arms in response.[19] More recently, presumably in order to increase its appeal, AQIS has altered its position on conducting attacks against civilians, declaring retaliation to be the sole valid justification for causing the loss of life among innocent bystanders and civilians.[20]

In general, Al-Qaeda’s presence in India is modest, at best — comparable to that of its rival the Islamic State (IS), which, despite its remarkable worldwide propaganda and networks, has not managed to accomplish any large-scale attacks and whose very limited appeal among Indian Muslims has, according to official accounts, further dwindled.[21] The rigorous scrutiny of Indian security agencies, the influential role of the family-oriented Indian Muslim community, along with the vehement opposition by the country’s major madrassas and movements all have served as strong bulwarks against terrorism, including against the strengthening of Al-Qaeda’s presence in the country.[22]

Yet, AQIS continues to explore and exploit opportunities to entrench itself. The state of West Bengal, where porous borders, inadequate local law and order, and a crackdown on militants in neighboring Bangladesh constitute potentially fruitful circumstances for AQIS to gain a foothold. Al-Qaeda’s Bangladesh-based operatives, along with some militants Bangladesh-based militants from Ansarullah Bangla Team (ABT)/Ansar al Islam, Jama‘atul Mujahideen Bangladesh (JMB), and Harkat ul Jihad al Islami Bangladesh (HuJI-B) have reportedly found sanctuary in West Bengal.[23] Any deterioration of the political and/or security situation in West Bengal could conceivably improve AQIS’ prospects for establishing its presence there.[24]

Similarly, the continuation or worsening of the spate of attacks by Hindu activists belonging to groups such as Bharatiya Gau Raksha Dal (BGRD), Bajrang Dal, and Vishva Hindu Parishad (VHP) could exacerbate religious tensions, which AQIS would almost certainly seek to capitalize on.[25] Indeed, one of AQIS’ Kashmiri operatives recently referred to these incidents as further reason for Indian Muslims to join the group.[26]

To date, Al-Qaeda in the Indian Subcontinent’s (AQIS) attempts to entice Muslims have been met with (mainly) stony silence and inaction. Simultaneously, the Indian government’s efficiency and the cooperation of the Indian Muslim community have prevented the jihadist phenomenon, and AQIS in particular, from amplifying — either in the form of attacks conducted or citizens travelling overseas to join the group’s international factions.

A rise in jihadist participation however, is symptomatic of the broader socio-political conditions in the country in which it takes root. In this regard, the fear of rising Hindu nationalism could spark a violent pushback from disenfranchised Muslims. Thus, the role of the Indian government in reigning in extreme elements needs to be extended to Hindu hardliners as well as Muslim extremists to thwart Al-Qaeda’s long-term ambitions in the country.

[4] “Code of Conduct: Al Qaeda in the Indian Subcontinent,” As Sahab Media Subcontinent, June 2017, accessed August 3, 2017, https://azelin.files.wordpress.com/2017/06/al-qacc84_idah-in-the-indian-subcontinent-22code-of-conduct22-en.pdf. See also Raj Shekhar, “All those who have blood of Kashmiri brothers on their hands are our targets: Al Qaeda document,” Times of India, June 27, 2017, accessed August 3, 2017, http://timesofindia.indiatimes.com/india/al-qaida-daesh-locked-in-india….

[5] “Code of Conduct: Al Qaeda in the Indian Subcontinent.”

[18] “Code of Conduct: Al Qaeda in the Indian Subcontinent.”

[20] “Code of Conduct: Al Qaeda in the Indian Subcontinent.”

[21] Vicky Nanjappa, “Chakravyuh: These ISIS recruits didn't know who they were speaking to,” One India, January 14, 2015, accessed August 3, 2017, http://www.oneindia.com/india/chakravyuh-these-isis-recruits-didnt-know….