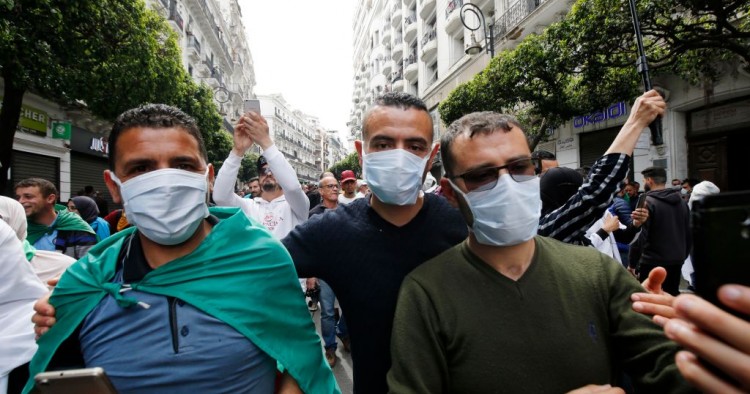 On March 20, Algeria’s streets were empty for the first Friday since the formation of the momentous Hirak social movement, its activists staying home in light of the novel coronavirus pandemic. The movement began in February 2019 in protest against President Abdelaziz Bouteflika’s announcement that he would run for a fifth term, and soon brought to an end his 20-year rule. Hirak has since morphed into a massive, leaderless, nationwide movement calling for a complete overhaul of the Algerian political system.

As Hirak’s primary repertoire of contention has been biweekly protests in key cities, some worry that the COVID-19 lockdown is tolling the movement’s death knell. However, Hirak’s intellectual leaders have long called for supplemental tactics, noting that despite being among the most significant social, political, and cultural phenomena in modern Algerian history, protests alone may no longer be as effective as they once were in extracting meaningful concessions from the regime. Thus, as ill-timed and worrying as this feels for many of the Hirak faithful, the global health crisis may come as a significant political opportunity for the movement.

An illegitimate regime calls on the public to stay home

There are now 847 confirmed cases and 58 deaths in the country, with the figures rising daily. But the regime faces a paradox in managing the crisis: the utter lack of public trust makes any strident steps in curbing transmission more politically difficult. Although the government of Algeria has imposed curfews in harder-hit regions as of March 24, it has been significantly slower to act than neighboring Morocco and Tunisia, and still has not followed suit in taking the step of declaring a nationwide state of emergency. Already, insufficient testing and the inevitable rationing of medical supplies are expected to reveal additional layers of state corruption and mismanagement, which will serve as further fodder for dissent.

In fact, even as the government banned public gatherings in early March, it initially refrained from explicitly saying whether this extended to the demonstrations. Yet such wait-and-see measures have not inspired public confidence, and have reinforced the image of a hesitant and ill-equipped regime. A Johns Hopkins study finds Algeria to be among the world’s least-prepared countries in the category of mitigation of epidemic spread, including detection and health systems, despite new President Abdelmadjid Tebboune’s assurances, including likely-exaggerated claims that the country has 2,500 intensive care unit beds, 6,000 respirators, and 6,000 test kits. Medical professionals within Algeria likewise warn that the already-stretched medical infrastructure will very soon reach its capacity. In this way, the outbreak could be as, if not more, disastrous for the unprepared and besieged regime as activists worry it will be for the Hirak movement.

When Tebboune eventually announced a ban on marches on March 17, Algerian social media erupted in dissent. Many vowed to continue taking to the streets, convinced that the regime was overstating the outbreak’s seriousness in order to strangle the movement, citing the many pretexts the regime used over the last year to break Hirak’s momentum. Some even initially veered into conspiracy theories, suggesting the regime was fabricating the epidemic.

Hirak activists have since largely come around to embracing social distancing as an exercise of the sort of patriotism and civic responsibility the movement has made part of its brand and culture. Prominent Hirak voices entreated people to stay home, with some refashioning an old slogan Yetnahaw gaʿ (“They all [the old regime] must go!) into Yetnahaw gaʿ? Ehh! Nmoutou gaʿ? La! (“They all must go? Yes! We all must die? No!”).

In a statement, the Hirak-linked university group Student Rally for Change (Rassemblement Estudiantin pour le Changement, or REC) said that rallies had to be suspended so that the “illegitimate regime does not use [the] demonstrations to justify its own failure to contain the epidemic after not taking the necessary measures, the lack of awareness campaigns, and our weak health system’s lack of capacity in providing for those currently infected,” and warned that Algerians must protect and organize themselves and their loved ones in the face of an absent state.

That the movement’s 57th Friday was the first to see near-deserted streets attests to the influence Hirak wields over the populace vis-à-vis the state.

That Hirak is reframing staying home as a form of protest suggests two important ways in which the pandemic presents a political opportunity for the movement.

First, the new socio-spatial dynamics are leading the movement to adapt the ways it protests and its means of expression.

Hirak is like most protest movements in that the occupation of public space is itself an important mode of claim-making. Every Tuesday and Friday, Algeria’s streets became a site for new articulations of the shared Algerian future. They convened diverse camps (secularists, Islamists, etc.) that may have otherwise never dialogued, who joined together in redefining Algerian belonging through a rejection of the status quo. The act of physically coming together gave most activists a renewed sense of personal and civic ownership over public space — until now largely and implicitly state-controlled — as evidenced in the post-protest clean-ups, mass meals, communal security, and neighborhood watches that developed.

This means social distancing or lockdown will compel Hirak to change how it mobilizes. With physical space unavailable for now, activists are taking to new domains, adapting established modes of action in the form of web- and balcony-based protests, dish-banging from windows, and doubling-down on social media communiques, with the intention of resuming physical occupation of the streets as quickly as possible. Committed activists appear determined to return to the streets in what writer Akram Belkaïd calls a “standing appointment upon the epidemic’s end.” Some observers even wonder if widespread anxiety over a slowing of Hirak’s momentum could rally those who support the movement but stopped attending demonstrations — temporarily boosting Hirak’s mobilizational strength once the coronavirus crisis has eased.

Second, and perhaps more significantly, the increasingly obvious cracks in Algeria’s health systems, governance, and leadership will give Hirak an opening to go beyond protest: to reframe grievances, articulate new demands, and forge a role in policy and service provision.

The province of Blida, home to nearly half the nation’s cases, may portend what is yet to come for the rest of Algeria if the curve does not flatten. Blida’s shuttered gas stations and food suppliers have left citizens unable to access foodstuffs and other basic necessities amid mounting cases and overwhelmed local hospitals. Blida’s Hirak activists have over past weeks expressed desperation and rage online, demanding a more swift state response to the region’s unique crisis.

COVID-19 is thus catalyzing significant shifts not only in Hirak’s methods of claim-making, but also in the substance of its claims, by refocusing on the state’s management of the public health crisis. Indeed, one of Hirak’s chief claims to legitimacy has been that it, and not the state, is the true voice and stand-in for the shʿab (“people”). To this end, Hirak activists are already calling for collective action to take the form of awareness campaigns, relief efforts, galvanizing aid, and harnessing the medical expertise within Hirak’s own ranks to form educational groups, and improve and generate credible public messaging on the disease. REC is one of several pro-Hirak groups to begin campaigns to raise awareness, disinfect city streets, and distribute protective wear to those in need. Marshalling both Hirak ethos and public distrust, these mobilizational pivots are framed as filling the gaps in state provision.

The pandemic has brought profound and indefinite uncertainty to societies the world over, and whether the opening provided by the health crisis will have lasting effects on Hirak’s modes of action is yet to be seen. Moreover, in a movement as diverse as Hirak, we cannot assume that it acts a bloc, or that the same impetus animates the breadth of its ranks. Indeed, there remain some hardline voices within Hirak calling for a return to the streets. However, that the majority is calling for a different tack and ready to use the crisis — and the public outrage that will likely ensue — as a political opportunity reveals a dynamic and adaptable movement that will continue to be a fixture in Algerian politics.

Dr. Vish Sakthivel is a Scholar and Lecturer in Political Science and Middle East Studies at Yale University and is writing a book on political Islam in modern Algeria. The views expressed in this article are her own.