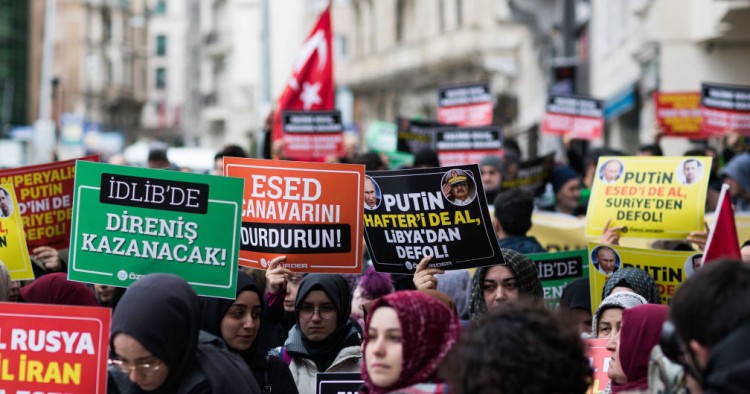 Turkish President Recep Tayyip Erdogan typically never misses an opportunity to appear in front of the cameras. But after the airstrike last week that killed dozens of Turkish soldiers in Syria’s Idlib Province, he was unusually quiet. The local governor of the south-eastern Turkish province of Hatay, just across the border from Idlib, did the talking instead, providing information to the outraged public about Turkey’s worst day in the Syrian conflict so far. As the death toll rose, so did the public anger. Angry crowds gathered in front of the Russian mission in Istanbul, condemning Moscow for the soldiers’ death. When Erdogan finally reappeared, he started his speech with a reference to the anti-government protests in 2013, then praised martyrdom, blamed the Assad regime for the attack, and went on to talk about the country’s economic performance. Many on social media asked whether Erdogan, a master at taking the Turkish public’s pulse, could be losing his touch. He is indeed an isolated man, surrounded by a group of sycophants, but there is more to last week’s performance than that. The conflict in Syria, which once seemed like a great opportunity to advance his interests at home and in the region, has become the biggest challenge in Erdogan’s 18-year rule. And Idlib was bound to become the place that would make that obvious.

In 2018, Turkey and Russia agreed to enforce a demilitarized zone in Idlib and Turkey pledged to drive the “radicals” out. Ankara hoped that it could delay a regime offensive for long enough to allow time for international efforts to resolve the conflict politically to gain steam. But Ankara failed to grasp the extent of Russia’s support for the regime — and that failure led to the killing of scores of Turkish soldiers last week.

While publicly Turkey blamed the Assad regime for the attack, in private Turkish officials admit that it was Russia, and the airstrike followed mounting tensions between the two sides over Idlib. Both parties blame each other for failing to implement the provisions of the 2018 deal and the meetings held by Russian and Turkish officials failed to offer a way out. As fighting increased Turkish casualties in Idlib, Ankara asked the U.S. to deploy two Patriot missile-defense batteries on its southern border to punish any future attacks by Russian-backed Syrian troops. Turkey also bolstered its support to the rebels, including allegedly providing MANPADS that were used in a rebel attempt to shoot down a Russian jet.

In retaliation for the attack, Turkey has been pounding regime forces, with the Ministry of Defense claiming to have hit dozens of targets and killed hundreds of troops, and Erdogan has vowed to continue until Syrian forces withdraw beyond the borders Turkey and Russia outlined in the 2018 deal. Turkey is hoping to inflict enough damage before the March 5th meeting between Vladimir Putin and Erdogan, and Ankara has been emboldened by Moscow’s inaction as it hit regime targets in the last few days. Indeed, Russia did not come to the rescue of the regime during the latest Turkish offensive. Despite the mounting pressure between Moscow and Ankara, neither side is interested in a complete rupture in relations, nor do they want a direct military engagement. Putin must understand the difficult situation Erdogan has found himself in domestically after the killing of the Turkish soldiers. Following Turkey’s request for U.S. Patriots and the pledge for military support by NATO members, Putin might be hoping to help Erdogan save face domestically and keep him on side by allowing a Turkish offensive against regime targets. Turkey has been targeting Iran-backed forces as well — a recent Turkish attack killed 14 members of Hezbollah. Local sources speculate that Russia, which has its own problems with Iran, might have greenlighted the Turkish offensive. After the attack, Iranian President Hassan Rouhani spoke with Erdogan and suggested a summit between Turkey, Iran, and Syria without Russian involvement. Indeed, the protracted war in Syria has created a fissure between Russia and Iran as the two vie for influence.

But Russian inaction so far does not mean Russia will keep tolerating Turkish attacks on regime forces. Sitting idly by as Turkey incapacitates the military Russia has helped to build would not only undercut Russian policy in Syria but also deal a blow to its efforts to project power across the region. A recent statement from the Russian Ministry of Defense saying Moscow “cannot guarantee the safety of Turkish aviation in the Syrian sky” is an indication of that. And things could get even more complicated for Turkey in Syria. The recent escalation in Idlib has sped up Kurdish efforts to enlist regime and Russian support for their plans to wrestle back control of the Kurdish town of Afrin, which was captured by Turkish troops in 2018.

In the meantime, badly needed Western support has not come in the form Erdogan would have wanted. While the U.S. and NATO expressed “full solidarity” with Turkey following the Syria airstrikes, the Patriots Turkey has requested were rejected by the Pentagon, which is still sour over Turkey’s decision to purchase Russia’s S-400 missile defense system and does not believe the Patriots would solve Ankara’s problems in Syria. Other NATO partners have pledged military support, but it is unclear whether those pledges will materialize, especially after Turkey announced it would no longer prevent refugees from heading to Europe — a move that greatly angered European countries. As thousands of migrants travelled to the border with Greece, which Ankara said was open, Athens deployed military forces and said it would deport migrants entering the country illegally. Dutch Prime Minister Mark Rutte condemned Erdogan for disregarding the terms of an agreement under which Europe gave Turkey cash to host refugees and warned that Europe should not renegotiate with Erdogan with “a knife at its throat.”

Despite the problems piling up on the foreign policy front, Erdogan managed to spin the dark mood at home after the killing of dozens of Turkish soldiers. The government’s statements and the decision to open the gates have created an impression among a public deeply troubled by the presence of Syrian refugees that thousands of them would be leaving for Europe. Footage of Turkish forces’ hitting regime targets is on loop on Turkish TV, easing the pressure on Erdogan to respond to the soldiers’ killing. But he must still be afraid of the domestic repercussions of the recent escalation in Idlib. In an effort to avoid public discussion of the incident, he scheduled a closed-door session with opposition parties in Parliament days after the attack and the governorate of Istanbul banned anti-war rallies until March 10.

Now all eyes are on the upcoming Erdogan-Putin meeting on March 5. Erdogan is going to Moscow with a weak hand. In the past, he played Russia and the West off against each other, but this time he managed to anger both sides, and Donald Trump has no desire to come to Turkey’s rescue. Putin might still choose to de-escalate, but it will likely be on his own terms if he does. Whatever solution is found in Moscow to the current tension, it will likely be a short-term fix. In the long run, Idlib will keep exposing Turkey’s foreign policy missteps and all the troubles the war in Syria has caused for Erdogan at home.