America Shifts to India to Help in Afghanistan 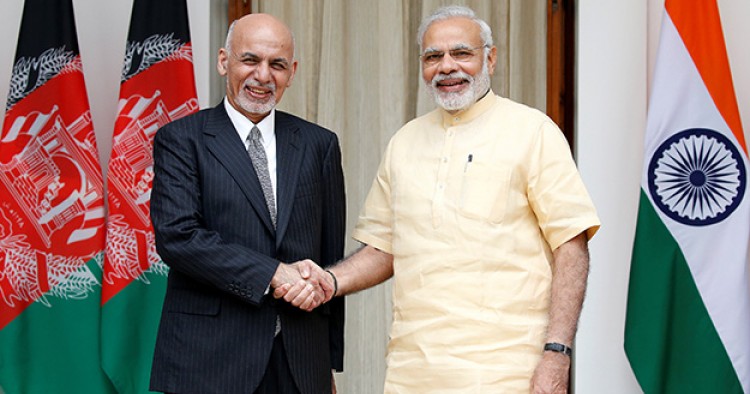 Ever since the announcement of America’s new Afghan-Pakistan strategy, the Trump administration has not been willing to let Pakistan off the hook. The manner in which President Donald Trump has confronted Pakistan on its double dealing on terrorism and called for a larger Indian role in Afghanistan has brought about an irreversible shift in U.S.-Pakistan relations.

During his just concluded visits to India and Pakistan, Secretary of State Rex Tillerson demanded the dismantling of terrorist infrastructure on Pakistani soil. In New Delhi, he said that “there are too many terrorist organizations that find a safe place in Pakistan from which to conduct their operations and attacks against other countries," while assuring Indian leadership that “in the fight against terrorism, the United States will continue to stand shoulder to shoulder with India. Terrorist safe havens will not be tolerated." In his forthcoming visit to Pakistan, Secretary of Defense Mattis is likely to convey the same tough message to Pakistani generals.

Whether the United States can successfully get Pakistan to cast off its longstanding policy of destabilizing Afghanistan or not, the current level of mistrust in U.S.-Pakistan relations is going to transform regional geopolitics. Pakistan’s geopolitical importance cannot be wished away by the United States. Besides having the world’s sixth largest population and a powerful army in control of nuclear weapons, Pakistan is strategically placed at the crossroads between the Indian subcontinent, Central Asia, and the Persian Gulf. Moreover, Pakistan is part of both the problem and the solution in the Afghan conflict. Islamabad’s cooperation is critical for the Trump administration’s strategy to stabilize President Ashraf Ghani’s government in Kabul. But nobody can deny the fact that Rawalpindi’s Afghan agenda has not converged with that of Washington.

During his September visit to New Delhi, Mattis was informed that India would not send combat troops to Afghanistan. India’s defense minister, Nirmala Sitharaman, said at a joint media briefing with her U.S. counterpart that “there shall not be boots from India on the ground in Afghanistan.” But the scale and scope of India’s security, economic and developmental involvement in Afghanistan is set to expand significantly.

Pakistan’s relationship with Afghanistan has always been viewed by Islamabad through the prism of a perceived threat from India. The Kabul-Islamabad relationship was conceived to help Pakistan secure ‘strategic depth’ against India. Needless to repeat, this flawed ‘strategic depth’ policy framework has nurtured extremist elements as non-state assets, including the Taliban. The inflated fear of India’s intentions means that Pakistani generals feel the need for a friendly Afghan government, especially in the context of Pashtun and Baluch irredentism. But the outcome has so far been just the opposite. India has emerged as one of Afghanistan’s closest allies and among the largest donors. India supports the construction of highways, the Afghan parliament building, as well as satellite transmitters and power plants. Pakistan could have benefitted from Indo-Afghan collaboration and India’s pursuit of energy sources in Central Asia by facilitating transit trade and energy pipelines. Instead, its security establishment has only chosen to try and disrupt New Delhi’s efforts. The Taliban-generated insurgency continues to undermine efforts to rebuild Afghanistan into a regional trade hub.

Pakistan has always stressed the common bonds of history and religion that it shares with Afghanistan as reason enough for Kabul to ally with Islamabad. For instance, in order to entice Afghanistan into its tight strategic embrace, Pakistan’s security establishment has named almost all Pakistani missiles after Muslim invaders of the subcontinent who once ruled over Afghanistan. Moreover, Pakistan views itself as the rightful inheritor of the ‘Raj’ in the north-western frontier of the British Empire. Similarly, Pakistani strategists believe that Pakistan is an expert player in the Pakistan-Afghanistan bilateral equation and that if only Kabul could follow Pakistan’s ‘advice,’ everything would be alright. But Pakistani attempts to make Afghanistan a client state through strategic instruments such as the mujahideen and the Taliban have resulted in a severe backlash. Now, the Afghan government fiercely criticizes Pakistan, and insists that sanctuaries on Pakistani soil have enabled the Islamist insurgents to sustain their terrorist operations in Afghanistan. Due to historical, geographical and strategic reasons, New Delhi cannot afford to remain aloof in regards to what happens in this region. India strongly believes that meaningful peace and stability in Afghanistan cannot be achieved without the unconditional dismantling of all terrorist networks in Pakistan. The focus of New Delhi’s security involvement in Afghanistan has often been on the issue of India putting boots on the ground. Although the Modi government has ruled out sending combat troops to Afghanistan, there is much India can do militarily to bail out the fragile Kabul government, which has been bearing the brunt of a renewed Taliban onslaught. The landmark October 2011 Strategic Partnership Agreement between India and Afghanistan unmistakably called for security cooperation between the two countries. In fact, India was the first country with whom Afghanistan signed a strategic partnership agreement.

Since the overthrow of the Taliban regime in 2001, India has pursued a ‘soft-power’ approach in Afghanistan by steering clear of an overtly military or security-centric role. Fused with the age-old adage of ‘my enemy’s enemy is my friend,’ as well as its generous developmental assistance, India’s soft power has magnified in Afghanistan. In fact, Pakistan’s continued interference in Afghan affairs has adversely impacted the perceptions of a large number of Afghans, fueling anti-Pakistan sentiments in Afghanistan. During Hamid Karzai’s tenure as president, Afghanistan had repeatedly sought military hardware from India, but the indecisiveness of the previous Manmohan Singh-led government could not make it happen. On the contrary, Indian Prime Minister Narendra Modi brought a definitive end to India’s long-held diplomatic ambivalence on Indo-Afghan ties. The four Mi-25 gunship helicopters that India transferred to Afghanistan last year must be seen in this context. In his numerous interactions with President Ghani, Modi has reiterated India’s full support to Afghanistan for strengthening its defensive capabilities. Moreover, the Trump administration has actively encouraged India to assume greater responsibilities in Afghanistan. This encouragement has been a decisive factor in removing whatever inhibitions India felt for a larger footprint in Afghanistan. Since both India and the United States have realized that all development work is unsustainable without strong external military support to the Kabul government, it seems reasonable to argue that India’s relationship with Afghanistan will begin to entail a military component—short of boots on the ground. The Modi government has recently decided to take up to 116 high-impact community developmental projects in 31 Afghan provinces. India has also agreed “to extend further assistance for the Afghan national defense and security forces in fighting the scourge of terrorism, organized crime, trafficking of narcotics and money laundering.” These initiatives send out an unequivocal message to Pakistan.

Pakistan has continued to defiantly assert that India has no political or security role in Afghanistan. Pakistani Prime Minister Shahid Khaqan Abbasi made this point in New York as did the foreign minister, Khawaja Asif, in Washington. However, Pakistan’s opposition to Indo-U.S. convergence on Afghanistan seems largely irrelevant to the Trump administration, which has explicitly indicated that its openness for negotiation with the Pakistan army is not the continuation of the past trend. The statement from U.S. ambassador to the U.N., Nikki Haley, that New Delhi can help Washington “keep an eye on Pakistan,” could only cause alarm in Rawalpindi.

Enhanced Indo-U.S. strategic coordination in Afghanistan is going to change the geopolitical and geostrategic configuration in the volatile Afpak region. Mattis’ statement on the China Pakistan Economic Corridor (C.P.E.C.) passing “through the disputed territory” of Kashmir was an expression of America’s reservations about the One Belt, One Road—of which C.P.E.C. is a part—and an endorsement of New Delhi’s position on the C.P.E.C. India considers China’s ambitious Silk Road project as a violation of its “sovereignty and territorial integrity,” as it passes through the Gilgit-Baltistan region in Pakistan-administered Kashmir, which is claimed by India. It also provided a clear hint of how the Trump administration plans to forge a new partnership with India on key regional issues including Afghanistan. Even if Washington and Islamabad reconcile their divergent positions on how to end the Afghan conflict, India’s say in shaping the future political order in Kabul is not going to be diminished.