Amid efforts to normalize Assad’s regime, the need for a new US Syria policy is clear 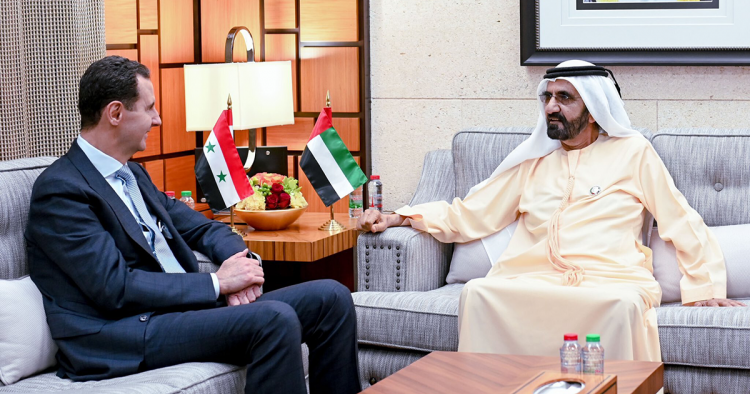 The decision by the UAE to host Syria’s President Bashar al-Assad in Dubai on March 18 has drawn deep consternation across the U.S. government and Congress, as well as in allied capitals in Europe and some in the Middle East. Assad’s trip — described by Emirati media as “brotherly” — was his first beyond Tehran and Moscow in more than a decade and followed a visit to Damascus in November by UAE Foreign Minister Abdullah bin Zayed (ABZ). One senior European official said the images from the Dubai visit made his “skin crawl,” and one regional official described it as “heartless.”

The intense response in recent days is understandable. Assad has personally directed more than a decade of ferocious crimes against his own population, resulting in the death of over 500,000 people. Assad’s regime has disappeared more than 100,000 civilians; it’s industrialized torture and rape and utilized crematoriums and mass graves to conceal the results; and it’s conducted more than 340 chemical weapons attacks. From infants to the elderly, no one has escaped the wrath of regime brutality, and the terror instilled over the past decade means the millions now displaced in Syria and abroad see no prospect of ever returning to their homes.

Over the years, the international community has rightly stood united against the Assad regime’s extraordinary record of barbarity. Ongoing war crimes investigations have already unearthed more evidence against Assad and his regime than the international community had against Adolf Hitler and the Nazi Party at Nuremberg. Welcoming Assad with open arms and declaring him your “brother” is a flagrant violation of basic moral values and hosting him on March 18 (which many Syrians consider the anniversary of their uprising) was to rub salt in an already gaping wound for the millions of Syrians suffering from Assad’s cruelty.

With the war in Ukraine continuing apace, a shared loyalty and unity of cause between allies has assumed vital importance, but relations with the UAE are clearly at a historically low point. That it took a concerted behind-the-scenes lobbying campaign by the highest levels of the U.S. government — and even by former Trump administration officials, according to two to well-placed sources — to convince the UAE to vote alongside the U.S. in condemning Russia’s invasion of Ukraine at the U.N. on March 2 spoke volumes. When close ties are needed more than ever, their absence is felt most acutely.

When UAE Foreign Minister ABZ visited Damascus in November 2021, the U.S. government was given prior warning by Abu Dhabi. A flurry of phone calls from Washington swiftly followed, including one from Secretary of State Antony Blinken, in which the UAE was urged in the strongest terms to cancel the visit, according to a senior U.S. government source. The trip went ahead, nonetheless. This time around, the U.S. received no heads-up from the UAE — leaving senior U.S. officials to discover news of Assad’s visit on social media. The sharp condemnation issued within hours by State Department Spokesman Ned Price was a clear illustration of the outrage felt across government.

With regards to Syria policy specifically, Assad’s visit to Dubai is not a complete surprise. After all, the UAE’s re-engagement with Syria’s regime began in 2018 with the re-opening of its embassy in Damascus. In 2020, UAE leader Mohammed bin Zayed (MBZ) spoke by phone with Assad and ABZ visited Damascus the following year. The Emirati and Syrian business communities have also been re-engaging for several years, including most recently at the Dubai Expo in 2021. A number of memorandums of understanding have been signed, as well as a November 2021 contract to construct a solar power plant in Damascus. Syrian regime businessmen now maintain a complex web of front companies in Dubai for use as transfer houses for payments into Syria. Syrian intelligence leaders visit the UAE periodically, including Ali Mamlouk, who, according to one European official, recently visited Abu Dhabi to offer to mediate between the UAE and the Houthis.

That perhaps all goes some way toward explaining the UAE’s exclusion from the restructured “Syria Small Group” that began meeting in Brussels in December 2021 and again in Washington D.C. in early March 2022. The new multilateral grouping now includes Turkey and Qatar, as well as Saudi Arabia, Jordan, and Egypt. While a certain degree of regional re-engagement with Assad’s regime is an unavoidable reality, a concerted process of normalizing the regime is not — and the exclusion of the UAE from allied Syria diplomacy cannot be a coincidence.

Moreover, despite many months of speculation around a possible “step for step” process of engagement with Damascus, that effort too looks to be falling out of favor. During the Small Group meeting in Washington three weeks ago, U.N. Special Envoy for Syria Geir Pedersen gave a presentation on his proposed “step for step” process and according to three member states present, it was met with a disapproving response. “Back to the drawing board,” was how one described the exchange.

Ultimately, much of this “normalizing” trend has been comprised of symbolic acts — more about optics than substance. Image is important of course, but it will amount to little for Syria or Syrians until political statements and actions evolve into financial engagement. For now, the deterrent power of U.S. sanctions, and in particular the Caesar Act, appears to be preventing foreign governments or entities from making any formal investments into regime-held Syria. Until now, the Biden administration has wielded the Caesar Act minimally, but according to all polling, Republicans are expected to win back control of both houses of Congress at the midterms in November. For months, key Republican figures have been preparing for this eventuality, so that a swift and full enforcement of Caesar sanctions will follow.

This is likely why a U.S.-mediated energy deal linking electricity and gas from Egypt and Jordan to Lebanon via Syria is under pressure. The World Bank — drafted in to manage the project as a result of its waived status — continues to grapple with possible funding mechanisms and both Egypt and Jordan are reportedly stalling, for fear of triggering sanctions, today or tomorrow. That the gas pipeline in question is fully under construction and maintenance contracts with Russia’s Stroytransgaz, now sanctioned following the invasion of Ukraine, has added a significant complication to an already complex arrangement. And at the end of the day, the agreed deal stipulates that in exchange for offering its territory as a transit point Syria will be rewarded with in-kind gas and electricity — energy resources that will unavoidably run along lines that power Assad regime military bases and prisons.

This troubling state of affairs provides yet more evidence for why the U.S. and likeminded allies need to acknowledge that an evolving operating environment requires strategic adaptation. To continue to pursue a Syria policy guided largely by providing emergency assistance, countering ISIS, and vocally expressing an aspirational support for a diplomatic settlement risks allowing symbolic engagements with Assad to become genuinely transformational actions. The UAE’s current posture toward Assad, and actions undertaken by Jordan and others, is largely the result of a widespread perception that the U.S. is no longer serious about Syria — something that has had a profound impact around the region and further afield already.

The time has come to pivot toward a policy that aims to create credible and sustainable realities on the ground, to push back against the proposition that unchallenged Assad rule is inevitable. A “freeze and build” strategy that focuses on freezing conflict lines and stabilizing and rebuilding northern Syria would re-assert international legitimacy and make an eventual diplomatic effort far more realistic.

Charles Lister is a senior fellow and the director of the Syria and Countering Terrorism & Extremism programs at MEI. The views expressed in this piece are his own.