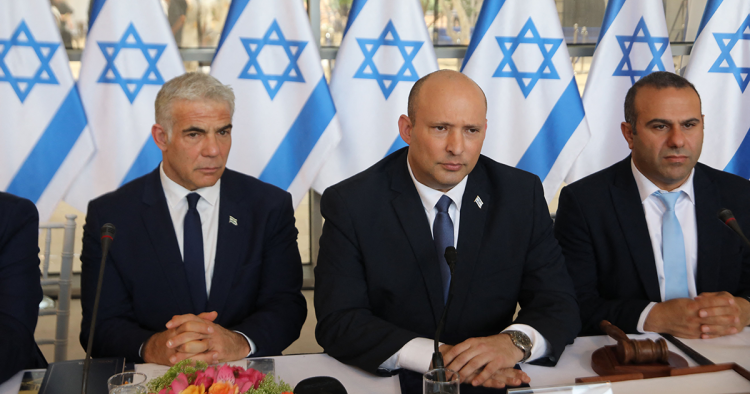 The gyrations of Israel’s coalition government, which still hopes to survive to its first anniversary on June 13, only make sense in its unique context. On Monday, June 6 it lost an important vote, in which more than half of the Knesset members on both sides voted against their own most fundamental beliefs in a desperate effort to either bring down the coalition or to save it. The substance of the legislation was barely more than a pretext, but the opposition smelled blood and was willing to do virtually anything to regain power.

The legislation at issue was a “routine” bill to maintain Israel’s jurisdiction over the West Bank for another five years, in order to ensure that the half-million Israelis who live there are treated as if they live within the “Green Line,” Israel’s pre-1967 borders. Though much of the Knesset — including Prime Minister Naftali Bennett — would very much like to permanently annex part or all of the West Bank, that is not on the agenda for this government, since its bedrock principle is to maintain the status quo with regard to the West Bank and the Palestinians. A fundamental aspect of this policy is the perpetuation of a military regime for West Bank Palestinians and an ordinary life for Israelis living there — and thus the legislation extending it for five more years has always passed with ease.

It’s not that the majority of the MKs disagreed with the legislation. Probably between 80 and 100 of them would have supported it in a free vote, out of the total of 120. However, politics in Israel are now decisively split between supporters and opponents of former Prime Minister Benjamin Netanyahu, which takes precedence even over the left-right divide. That is the only reason why the current government, unprecedentedly, contains far and mainstream rightists, centrists, leftists, and an Arab party, many of whom would be politically more comfortable with the opposition were it not for the divisive figure of “Bibi” Netanyahu, whose Likud Party and its allies, with a total of 60 members in the evenly divided Knesset, are determined to prove the country ungovernable under the current coalition. The chaos that would theoretically ensue if this legislation isn’t passed, even though they themselves are unashamedly holding it up, is, for them, a perfect example of the government’s inability to accomplish anything.

In fact, it is unlikely that Israeli settlers would spend even one day under the military regime that governs their Palestinian neighbors. They are an important enough constituency that a workaround will probably be found, one way or another. But the process would be chaotic enough that the government’s image, already tarnished, would suffer another heavy blow.

It is not only the right, however, that voted against its basic values. Even more distressed was the left-wing minority in the coalition from the Meretz and Labor parties, whose main political banner is fighting against the occupation. They are ardently against privileges for the settlers, yet cold calculation tells them that anything outside of this coalition would be much worse for them and their values — so they gritted their teeth and voted with the coalition. There was one exception, Meretz MK Ghaida Rinawi Zoabi, who last month had bolted the coalition but returned after three days, and who voted “no” this time, against the coalition. Meretz MKs know that their constituency wants them to maintain the government as long as possible, but their voters are also asking themselves what the point of voting for a left-wing party is, when it is stuck in a coalition sworn to uphold the occupation. At least some might well switch to the majority-Arab Joint List, which refused to join the coalition, and thus voted against the bill with an absolutely clear conscience.

Perhaps the only more anguished group were the four MKs of the Arab and Islamist ﻿United Arab List, known by its Hebrew acronym, Ra’am, which, unprecedentedly for an Arab party, is part of the governing coalition. Three of them absented themselves and the fourth, like Zoabi, voted no. The final vote, including some genuine illnesses, was 52 for the bill and 58 against.

As noted, it is unlikely that this will change things at all for the settlers. Nor was it designated a vote of confidence, by which a loss might have brought down the government. But things can’t go on like this. The coalition was formed last year with 61 votes, but a right-wing MK from the PM’s own party defected in April, leaving the opposition unable to bring the government down, but the coalition unable to govern. Both blocs are desperately trying to encourage more defections — with no success so far. The general assumption is that there may have to be new elections by the end of the year, coming on the heels of four successive elections in less than two years, the first three of which were unable to produce a functional government

Of course that may not settle anything. Recent polls indicate that the country continues to tilt heavily toward the right, but that in a new election the current balance of pro- and anti-Netanyahu seats in the Knesset may well remain the same. Netanyahu’s ongoing trial for fraud and breach of trust is expected to last for at least another year, and he maintains his political power.

Were Netanyahu to disappear from the scene, a government of the mainstream right would almost certainly emerge, perhaps also including some of the “centrists” who dominate this one. But the former PM is a vigorous 72 and no one is counting him out yet. So, paradoxically, though Netanyahu is loathed by the political left and the center, it is solely his continued presence in politics and his insistence on leading the Likud that has enabled their presence in the current government, unwieldy as it is, and their ability, such as it is, to block possible annexation of the West Bank, among other rightist policies. That explains why they find themselves voting for legislation they abhor, in the hope of staving off something worse. It is an unenviable position to be in — and presumably something will have to give soon.

Paul Scham is a non-resident scholar at MEI and the director of the Gildenhorn Institute for Israel Studies at the University of Maryland, where he is a professor of Israel Studies. He is also president of Partners for Progressive Israel, an American NGO. The views expressed in this piece are his own.