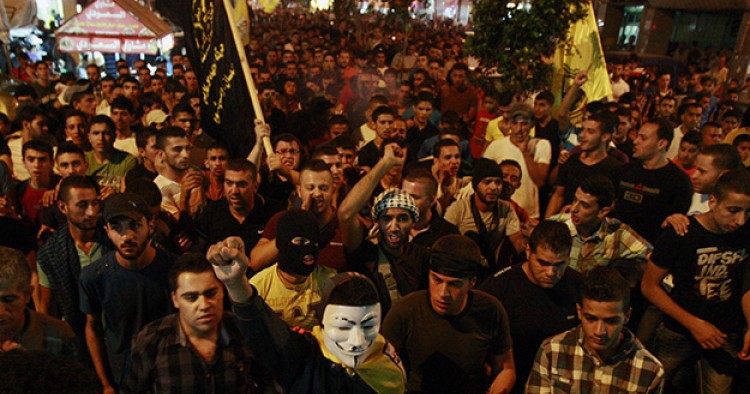 Predictions of a new Palestinian intifada in the occupied territories tend to accompany every breakdown in the diplomatic process, announcement of a new colonial expansion project, and Israeli violence against Palestinian life—such as the recent horrific murder of Palestinian infant Ali Dawabsheh by settler terrorists who set fire to his West Bank family home.

Such projections are often prefaced by observations that Palestinians in the occupied territories today live under conditions that are on the whole considerably worse and more hopeless than those on the eve of either the 1987-1993 or 2000-2004 uprisings.

While it is indeed true that Palestinians, whether within their country or in exile, are currently experiencing unprecedentedly dire circumstances, rebellions are almost never instigated by reality alone. When they are, they tend to take on the character of short-lived and often uncoordinated demonstrations, clashes, and attacks. Indeed, this was the case in the aftermath of the immolation of Jerusalem teenager Muhammad Abu Khdeir by settler terrorists and the pulverization of the Gaza Strip by the Israeli military in the summer of 2014. This is also what will most likely happen in the West Bank this summer: expressions of outrage, a reprisal here and there, and then back to business as usual.

An important reason why forecasts about a new insurrection habitually fail to materialize resides in the manner in which the previous two uprisings are remembered and interpreted. The conventional history of the 1987 intifada is that a December 8 car accident at the entrance of the Gaza Strip, in which an Israeli military jeep rammed a Palestinian car and killed four of its occupants, lit a fuse that produced mass demonstrations. The protests first erupted in Gaza’s Jabaliya refugee camp and then spread to the Balata refugee camp in the northern West Bank, and quickly engulfed every town, village, and camp throughout the occupied territories. Similarly, the 2000 Al-Aqsa Intifada is typically remembered as having been triggered by Ariel Sharon’s deliberately provocative incursion into Haram al-Sharif against the backdrop of diplomatic failure at Camp David the preceding month.

While the above renditions provide an accurate description of events, they neglect more important, if largely obscure, dynamics that had been unfolding over the previous years. In the case of the 1987 uprising, the organizations that collectively formed the Palestine Liberation Organization (PLO) had, particularly since their expulsion from Beirut in 1982, conducted intensive organizational work within Palestine and had effectively established an infrastructure of revolt, even if not for the express purpose of unleashing one. The Palestine Communist Party (PCP), Islamic Jihad, and to a lesser extent the Muslim Brotherhood—none of them members of the PLO—had been conducting similar and in some cases more intensive grassroots activities.

Secondly, a long-running schism within the PLO was resolved in Algiers in April 1987 with a unity agreement that also for the first time incorporated the PCP into the umbrella organization’s ranks. Thus while it is correct to claim that the subsequent intifada took the PLO—Yasir Arafat and George Habash included—by surprise, the Strike Forces, the Unified National Leadership of the Uprising, and various other committees emerged almost organically on account of previous efforts and developments. Crucially, for this reason they also had the capacity to expand and sustain the popular rebellion and overcome Israel’s increasingly furious attempts to pacify the occupied territories.

Although the 2000 uprising was a very different animal, there were important similarities. As in 1987, the spontaneous demonstrations and, in the latter case, initially random armed attacks were quickly channelled into an organizational framework by a leadership keen to use the developments as leverage in its relationship with Israel and the United States. Hence Fatah’s newly-formed Al-Aqsa Martyrs’ Brigades, which drew upon the movement’s organizational infrastructure and Palestinian Authority (PA) security forces, both fostered by Arafat, quickly transformed what were essentially disturbances into an insurgency. It lasted long enough for the Islamist Hamas movement to conclude that it was more than a transient show of force by Arafat and to play an increasingly prominent role in the rebellion itself. The sometimes violent rivalries between the various Palestinian organizations and factions involved in this uprising notwithstanding, Arafat after 2000 never turned his guns primarily against his own people.

The situation today could not be more different than that of 1987 and 2000. To begin with, there is an unprecedentedly deep schism within the Palestinian national movement, and as Palestinian analyst Jamil Hilal has argued, neither the Ramallah nor Gaza authorities will tolerate an uprising against Israel for fear it could be instrumentalized by their Palestinian rivals against themselves. Hilal also argues that Palestinian society has become so fragmented, atomized, and neoliberalized that the prospects for sustained collective action are today not in the cards.

It can in fact be argued that the Palestinian national movement, at least for the present, no longer exists. The PLO exists in name only, while Fatah—traditionally its spinal cord—has been thoroughly decimated during the past decade, primarily by its own leadership rather than by Israel or Hamas. It now hovers between disintegration and extinction. In a society that has traditionally been highly mobilized, the largest constituency today is “none of the above.”

Similarly, the regional equation in 2015 is fundamentally different than it was in the late 1980s or the beginning of this millennium. While the Arab world may at these previous junctures have been preoccupied with Iraq and Iran, its governments felt compelled to at least demonstrate solidarity with the Palestinians and advocate on their behalf in international fora.  Today most of these states either do not have functioning governments or are too busy ensuring their own survival.

In addition, Palestinian diaspora communities had remained relatively coherent and cohesive until recent years. Not only were they able to organize in support of their compatriots in the occupied territories, but they also benefited from these uprisings; it is often forgotten that the first significant achievement of the 1987 intifada was to compel Lebanon’s Amal movement and its Syrian sponsor to lift the siege of Palestinian refugee camps in Beirut. These communities have since been thoroughly marginalized by the Oslo agreements and a reconfigured Palestinian political system, and in recent years they have been shattered in countries like Iraq, Libya, and Syria.

Even if the above mitigating factors were overcome, the present Palestinian leaderships, and particularly that in Ramallah, are averse to popular mobilization. Hamas has essentially committed to conducting only defensive operations except in the most extreme of circumstances, while the PA in Ramallah has been systematically conducting offensive operations for most of the past decade—but against its own people and precisely in order to obstruct the emergence of a serious challenge to Israel’s occupation. Indeed, such activities go well beyond the consistent arrests of Hamas and Islamic Jihad operatives, which might be explained away as an act of PA self-preservation, and include brutal attacks on various forms of peaceful protest, such as those calling for a Palestinian moratorium on negotiations with Israel or denouncing Israel’s periodic assaults on the Gaza Strip.  This lies at the heart of the increasingly widespread demand for an end to the PA’s “security coordination” with Israel. There is good reason that the end of the 2000 intifada is often dated November 11, 2004—the day of Arafat’s death.

In conclusion, observations that the Palestinians have not had it so bad since 1948 should reference not only the various indicators that would lead one to suggest another uprising is imminent, but also those factors that together conspire against renewed rebellion. The latter are of course not permanent, but their transformation requires a combination of time, effort, vision, commitment, leadership, and especially hard work. Only then will there be an organizational infrastructure that can once again channel popular fury and mobilize, organize, and sustain a new Palestinian intifada.

An earlier version of this article was published by Al Jazeera America.

The way forward for Palestine: Fatah, Hamas and Dahlan

The Palestinian Quest for Reconciliation: Can it be Achieved?