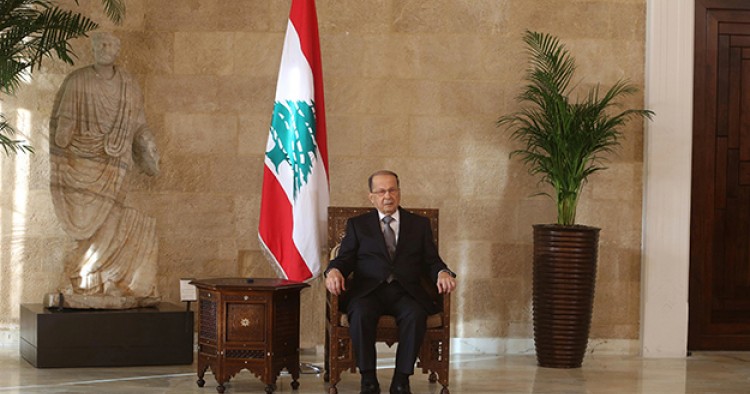 After a hiatus of two and a half years, Lebanon has a new president. The Lebanese parliament has elected Michel Aoun, a former army chief, as the country's 17th president. Michel Aoun owes the presidency to three men: Samir Geagea, the leader of the Christian Lebanese forces, Saad Hariri, the former Sunni prime minister, and Hassan Nasrallah, the leader of the Shiite Hezbollah.

At 81, Michel Aoun achieved his long-desired objective of becoming president. He comes into office with two unrealistic objectives: reclaiming the Maronite political prestige and power lost in 1989 and empowering the state. The Taif accord, which ended the 15-year civil war, stripped most of the powers of the Lebanese presidency, a post reserved for Christian Maronites, and invested them in the office of the prime minister, traditionally held by a Sunni. Aoun's second stated objective is to reform inefficient and corrupt state institutions. It will be very challenging for him to achieve either. War and demographics have made the Maronite political-preeminence impossible. Compared to Muslims, demographic trends do not favor Lebanese Christians, with the latter numbering less than 40 percent of the population (this estimate is based on the voter registry). Nor will Aoun be able to reform a patronage system in which all political stakeholders including his own ministerial and parliamentary blocs and large swathes of Lebanon's citizens are invested in its preservation. Moreover, overcoming these challenges requires the temperament of a conciliator-in-chief who is able to exact concessions from his opponents through compromise, rather than confrontation. Aoun's track record proves he does not have it.

By backing Aoun, Samir Geagea and Saad Hariri are hoping that Aoun will break his 10-year old alliance with Hezbollah and join their ranks in opposition to Hezbollah's paramilitary infrastructure. This bet reflects an ill-informed reading of the drivers of the Aoun-Hezbollah alliance, which was sealed in a 2006 memorandum of understanding between Hezbollah and Aoun's Free Patriotic Movement. For Aoun, a primary driver of this alliance is his long-held ambition to restore historical Maronite political and economic dominance in Lebanon.  Hezbollah's weapons are less a means of defending Lebanon against Israel and Salafi jihadi groups, and more an enabler of his quest to upend the status quo in place since the 1990s and to seal his leadership role of Lebanon's Christians. He has no incentive to break away from Hezbollah and there is no pressure on him from his base to do so. To the contrary, his argument to his constituency that a bet on Hezbollah will pay off has been proven right.

While Geagea and Hariri benefit from being perceived as the kingmakers, they are least interested in assisting Aoun become the preeminent Maronite leader he desires to be. Given Aoun's age, Geagea stands to emerge in the long-term as the predominant Maronite leader. Though for different reasons, both men are invested for now in perpetuating what Taif has created: a weak presidency.

By supporting the candidate Hezbollah has championed, Hariri has lost political capital with his Sunni constituency. But his return to the prime minister's office will restore most of this capital, particularly as there is currently no credible and viable Sunni political alternatives to Hariri. His Sunni opponents either lack the charisma, like former Prime Minister Najib Mikati, or have limited national appeal, as is the case with current justice minister Ashraf Rifi. The horrors committed by ISIS in Syria and Iraq have discredited the emergence of any competition from within the Salafi jihadi movements.

Of the three men who brokered Aoun's presidency, Hassan Nasrallah emerges as the clear winner. He comes across as a reliable and strong ally who delivers on his promises. Since May 2014, Hezbollah and pro-Aoun parliamentarians have denied quorum in the Lebanese parliament insisting that agreement be reached on Aoun’s election before convening to vote. Nasrallah never wavered in his support of Aoun, even when Suleiman Franjieh, another Maronite ally, submitted his presidential candidacy. Hezbollah played a long game and it paid off—a feat that has been largely facilitated by the disarray in its opponents' ranks.

Similar to Geagea and Hariri, Nasrallah is neither interested in upending the Taif accords, nor in particularly strengthening Aoun, especially at the expense of his other allies, chief among them Shiite ally Nabih Berri, the speaker of parliament. For Hezbollah, sidelining the Taif accords in favor of another power-sharing formula will give rise to Sunni-Shiite conflict in Lebanon at a time when such conflict will divert resources away from its military priorities in Syria and elsewhere in the region. In the Aoun-Hezbollah-Berri triumvirate, Berri, who is Hezbollah's most trusted ally, will play the role of enforcer of the rules of the Taif political game, if and when Aoun seeks to sidestep them.

For the first time in a long time, Lebanese political leaders and not regional powers, are the primary drivers of a deal to choose and elect a president. This is partly due to the fact that Lebanon is no longer the premier regional proxy battleground it used to be. Syria and Iraq have taken over that role. It is also due to the fact that all Lebanese political leaders have come to the conclusion that continued political paralysis hurts their interests however they define them. Nevertheless, it is a misguided expectation that Aoun, or any future president, can usher in the stability Lebanon needs for durable peace and sustainable economic development. The structural weaknesses in the political system coupled with a regional conflict environment will prevent durable stability from taking root in Lebanon for the foreseeable future.