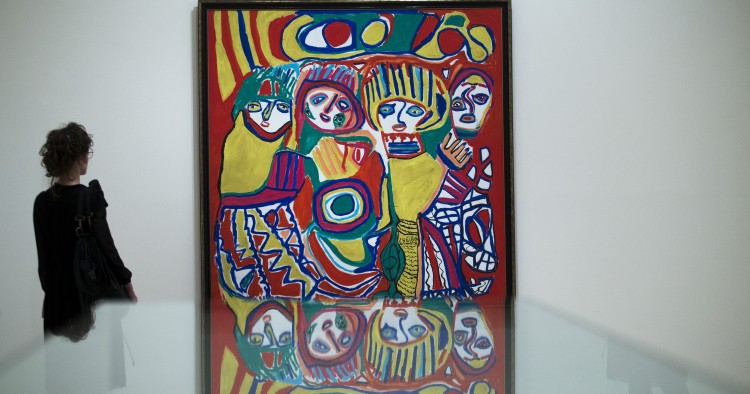 ‘Arab,’ ‘Islamic’, or ‘Middle Eastern’ art are all terms used interchangeably. Despite a wide variety of contemporary artistic practices in the region, artists from the Middle East are consistently labeled with ethnic and national markers.

What exactly is ‘Arab’ art? Google searches for ‘Arab art’ mostly return ‘Islamic art’ results. Islamic art, as the visual heritage of Muslim civilization, is still how most of the West engages with art from the Middle East and North Africa (MENA); through the myopic lens of either calligraphy or the more contemporary artistic production of the Arab Spring.

Admittedly, ‘Islamic art’ has a trim definition—arts produced in the land where Islam was or is the dominant religion. But unlike Christian art and Jewish art, terms which refer only to the religious iconography or art of these faiths, Islamic art refers to all forms of art produced in the Islamic world, from architecture to painting, regardless of whether their subject is religious or not.

It’s not a matter of semantics. Using the encompassing term of ‘Arab art’, much like other cumbersome terms like ‘African’ or ‘Asian’ art, gives the false impression that the region is homogeneous. One of the major issues of framing and labeling art from the region as ‘Arab art’ is that it underlines the dominance of only a few, narrow interpretations of ‘Arab culture.’ The question boils down to whether the phrase ‘Arab art’ corresponds to a distinct reality.

‘Arab art’ is a misnomer, as it creates a fabricated homogenous ‘Arab culture’ that undermines the reality of a diverse region filled with a multitude of unique experiences and ways of seeing the world. It also promotes misleading notions of authenticity. In a globalized world, a dinner of fries, a cheeseburger, and a milk shake is now every bit as ‘authentic’ as a traditional plate of kibsa, even in a city as isolated as Riyadh.

Even when Arab artists seek inspiration from the reality of living in a contemporary world, it is only through the recognition of the West that their local cultural situation is framed.  Curator Loren Elhili spoke specifically about tackling ‘static stereotypes’ in her Feminism(s) x The Arab and Muslim Diaspora. The general expectancy of the exhibition was that it would highlight Muslim women in certain cultural contexts—hijabs, burqas, and other obvious forms of oppression. Instead, the curators chose female artists who emphasized an intersectional existence, and also happened to be Muslim.

There is a certain kind of implied manipulation with issues of legitimacy, culture, and identity in the current contemporary art discourse. Arab artists must contend with being both creative producers as well as social activists—they potentially risk their work being delegitimizing when they don’t tackle socio-political issues. Art from the region inadvertently relies on ‘labelled,’ politicized,’ and ‘nationalistic’ frameworks to ensure international relevance.

Although the original purpose of these frameworks may not have been to discriminate, but rather to carve out a space for groups traditionally overlooked, the result is only inadequate representation. Creating a space outside of the mainstream further perpetuates the idea of the  ‘other.’ Edward Said’s words in Orientalism (1978) are still true; the notion of ‘Othering’ was formulated to explain how Western individuals perceived and portrayed the non-Western world, “the ‘Orient’ only comes into existence when the Occident animates it.”

Native representations of Islam and Muslims are currently widespread in Western public discourse, but chiefly as symbolic testimonials that both reconfirm and try to disguise a still-dominant Orientalist ideological belief. This narrative seeks comprehension and recognition through a Western lens, forcing an intertwined paradigm between political and religious implications and creative production.

There is also the dilemma of the relationship of a self-conscious ‘otherness’ that has to exist in a mainstream global culture. Artists from the region still act in a performative manner; many of the most commercially successful Arab artists are ones whose oeuvre falls in step with Western expectations of ‘Arab’ or ‘Islamic’ art.

Saudi artist Abdulnasser Gharem, one of the region’s most prolific artists, masterfully maneuvers this expectation. Gharem uses familiar formulaic imagery recognizable for a Western audience to comment on how the Muslim world is often misapprehended.

The question remains, what does ‘Arab’ art consist of?

Holland Cotter’s review of Here and Elsewhere, The New Museum’s 2014 group exhibition on contemporary work from the Middle East, “winced” at the description of the exhibition as contemporary art “from and about the Arab world.”

Cotter states, “in reality, there’s no right way to go,” but begrudgingly accepts that “if shows like this are the only way, given the provincial nature of the New York art work, that we get to learn about what’s happening across the globe, so be it.”

‘Arab art,’ like all labels, should be accepted as a useful but artificial concept. The contemporary art scene in MENA is made up of a multitude of different influences and experiences, and the complexity with which these are assimilated is fundamental to production. Reviews, art criticism, theoretical texts, catalog statements, and interviews should include considered, well defined, and contextualized labels, if they are used at all.

There have been recent strides in working on regional labelling. Yale University hosted a ‘Writing/Curating the Middle East’ symposium in March 2017. The event brought together curators, researchers, and art historians who work with art in the region to examine and propose new ways of engagement beyond the Western dominated lens.

The conversation on labels, despite its challenging and confronting nature, is crucial to a more nuanced understanding of the art from MENA, and perhaps eventually can provide genuine insight on its many societies.