The Belt and Road Initiative in the Gulf: Building “Oil Roads” to Prosperity 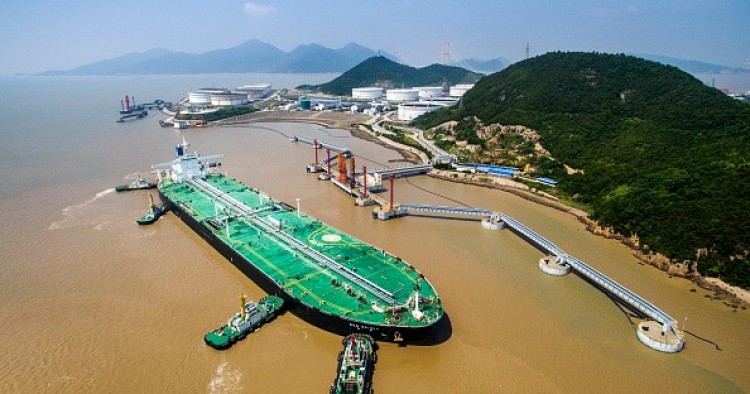 Although the Gulf is not highlighted on the official map of China’s Belt and Road Initiative, it is one of the main regions where the BRI is being implemented. On the occasion of President Xi Jinping’s speech at the 6th Ministerial Conference of the China-Arab States Cooperation Forum in June 2014, he declared the regional countries as being “natural cooperative partners in jointly building the BRI.”[1] Since then, Chinese state and private firms, banks, and financial institutions have embarked on efforts to advance the BRI in the Gulf, particularly in the energy sector.

An important aspect of the implementation of the BRI in the Gulf is securing energy resources. This is factored by China’s growing energy needs, which is expected[2] to increase to 14.2 million barrels daily, and the Gulf’s energy reserves, 48% of the world’s total oil reserves and 40% of the world’s LNG reserves.[3] In recent years, the region has been the source of as much as half of China’s imported oil. The BRI is expected to facilitate Chinese energy firms’ delivery of even larger volumes from the region. Lu Ruquan, Director of the Strategic Development Department of the China National Petroleum Corporation (CNPC), affirmed this by stating that the BRI constitutes “oil roads”[4] through which energy resources will flow between the world’s major oil producers and China.

As a result, similar to the “Go Out” policy initiated in 1999, the BRI has led to growing Chinese energy activities in the Gulf. These include the signing of energy-related agreements between Chinese and the Gulf elites. An important example was the signing of a strategic partnership with Qatar during the Emir of Qatar’s visit to China at the end of 2014.[5] This was followed by the signing of a Memorandum of Understanding (MoU) between the National Development and Reform Commission (NDRC) and the Qatari government entitled the “Qatar-China Joint Promotion of Related Cooperation on the One Belt, One Road.” According to Article 2 of the MoU, both countries intend to “enhance substantial cooperation […] [in] energy.”[6] A more recent example occurred in February 2018 when Foreign Minister Wang Yi and Vice Chairman of the NDRC Ning Ji Zhe met[7] with Minister of State Sultan Al Jaber and the CEO of Abu Dhabi National Oil Company (ADNOC) on expanding energy ties between China and the United Arab Emirates (UAE).[8]

Besides signing agreements and engaging in state-to-state negotiations, Chinese officials have been working with their counterparts in the UAE to set in place the institutional and financial regulatory frameworks intended to facilitate and expand cross-regional activities related to implementation of the BRI in the Gulf.[9] In 2016, China and Saudi Arabia established a high-level joint committee, one of whose six sub-committees was put in charge of the BRI.[10] Importantly, China has been working to resume negotiations aimed at concluding a Free Trade Agreement (FTA) with the Gulf Cooperation Council (GCC).[11] Although many of these frameworks have yet to be finalized, all are intended to mitigate the political risks and uncertainties surrounding the implementation of the BRI.

Chinese companies have been crucial players in the energy dimension of the BRI in the Gulf. In March 2017, for example, China National Offshore Oil Corporation (CNOOC) signed a one-year term crude oil supply contract with Aramco for the Huizhou refining projects. [12] CNPC’s trading arms, China Oil and Huajin Chemical have also engaged in talks with Aramco for oil supplies to their respective refineries.[13]  In the case of Chinaoil, the deals are intended to supply CNPC’s greenfield Yunnan refinery in western China with 13 million mt/year (260,000 bp/d), and the crude is expected to be delivered through the BRI-developed Myanmar-China pipeline.[14] With respect to Huajin, Aramco is responsible for supplying Arab Heavy oil for the latter’s 120,000 bp/d refinery.[15]

In October 2017, PetroChina and Sinopec conveyed their interest in purchasing a 5% share of Aramco as part of an effort to secure oil supplies for the country’s growing demand.[16]  Four months later, CNPC concluded a deal with Aramco to purchase 12 million barrels in 2018, nearly double the amount previously agreed.[17] In July 2018, CNPC was awarded a $1.6 billion deal by ADNOC to carry out offshore and onshore seismic surveys.[18]

Private Chinese firms, though to a lesser extent than state-owned enterprises, are also involved in implementing the BRI in the Gulf, In July 2018, for example, the Chinese Hengli Petrochemical Co. Ltd. Signed an agreement with Aramco to supply it with approximately 20 million tons of crude oil for a year — reportedly the first such agreement between Aramco and a private Chinese energy firm.[19]

Chinese energy companies are also engaged in developing the transportation and other physical infrastructure necessary to maximize the energy potential of the BRI in the Gulf. In 2016, Sinopec cooperated with Aramco to launch the Yanbu Aramco Sinopec Refining Company (YASREF) refinery. [20] Tabled in 2012 with an initial investment of $10 billion, the project is the largest Chinese investment in Saudi Arabia and the first overseas refinery built by Sinopec.[21]

During the King Salman’s visit to Beijing in early 2017, the China North Industries Group Corp (Norinco) also signed an agreement with Aramco, on the construction of refining and chemical plants in northeast China. The plan, which includes a 300,000 bpd refinery and an ethylene complex with an annual capacity of one million tonnes, is to be developed at an estimated cost of $10.09 billion.[22]  Sinopec and the Saudi Basic Industries Corporation (SABIC) are engaged in building petrochemical projects in Saudi Arabia and China and in expanding the joint venture Sinopec-Sabic Tianjin Petrochemical Company Limited.[23]

With $300 million in financial support from the Asian Infrastructure Investment Bank (AIIB), several Chinese companies have also been involved in the construction of Duqm Port and in railway infrastructure projects in Oman. [24] This investment can be viewed as grounded in Xi’s strategic calculation to lay down an efficient and effective sea route for China’s trade and investments in the region. The project’s official document, published by the AIIB, further outlines[25] its importance. Related, the Chinese railway projects in Oman are intended to expedite the flow of energy from other Gulf producers and possibly the wider Middle East. Meanwhile, the Duqm port is expected to be a vital hub for energy transport between China and the Gulf.

The various projects presently being built in Duqm include a refinery capable of processing 235,000 bp/d and a petrochemical complex,[26] the $2.3 billion methanol-to-olefins (MTO) plant, and a greenfield methanol complex. The integrated natural gas-fed methanol and MTO complex is expected to have a capacity of 10 million tons/year and would count among the largest petrochemical schemes in the region.[27]

In addition to the construction of energy infrastructure in the Gulf, the BRI includes the building of facilities outside the region that will help facilitate the flow of oil and gas resources between China and the Gulf. CNPC, for instance, invested $2.5 billion for the construction of the deep-water port and pipeline projects in Kyakphyui, Myanmar’s western coast, which was opened in early 2015.[28] As some observers have noted, the construction of these projects would allow for energy resources from the Gulf to be transported via a 771-km pipeline from the Bay of Bengal into Yunnan Province in China, bypassing the often dangerous Malacca Strait.[29]

China Overseas Port Holding Company (COPHC) has also concluded a 43-year lease to develop and operate the port of Gwadar in Pakistan. The agreement grants the COPHC authority to control all the port’s activities.[30] The project, which is intended to connect Kashgar in Xinjiang with Gwadar, not coincidentally serves as the shortest route for energy transports from the Gulf to the western part of China.

With the BRI serving partly as “oil roads,” the flow of energy resources between China and the Gulf can be expected to be expedited and expanded as needed. By the end of 2015, 110 million tons of crude oil were shipped from the Gulf, accounting for 75% of China’s imports from the Arab countries[31] while by 2017, Qatar became[32] the largest LNG supplier to China, satisfying about 35% of its LNG needs. With the expected increase in energy deals and the completion of large-scale energy projects under the Belt and Road Initiative, many of which are still under construction or yet to be built, the BRI can ameliorate China’s energy anxieties, in turn helping sustain the country’s economic growth.

[10] Liu Li and Wang Zesheng, “Belt and Road Initiative in the Gulf Region: Progress and Challenges.”

[31] Liu Li and Wang Zesheng, “Belt and Road Initiative in the Gulf Region: Progress and Challenges.”