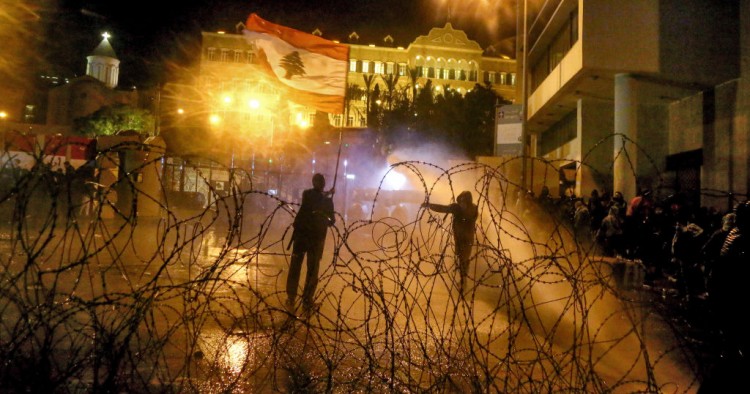 The Lebanese are in trouble. Lebanese leaders have borrowed and spent money for decades without addressing fundamental flaws in their state, economy, and society — operating in an order that, while not the cause of every problem under the sun, aggravates their poor politics, policy, planning, and governance. Struggling with fiscal, financial, monetary, commercial, and macroeconomic crises, all of which are intimately intertwined and aggravate decades-old problems, the Lebanese now confront challenges that are simple to understand, difficult to solve, and — at a philosophical level — impossible to accept after 30 years of peace and 15 years of independence.

With little to show for all the drama and debt, the Lebanese people have been demanding change — of leadership, of behavior, of conditions — for six months. Lebanese leaders, once again, have offered the false sacrifice of a formal entity or endeavor while preserving their position atop the intercommunal order. After the cabinet collapsed in October 2019, Lebanese leaders then dithered, dallied, and disagreed for three months before finally forming a government. They confront the same acute crises that they were facing when citizens began calling for change and are still grappling with the same fundamental flaws that have existed for 30 years.

Stepping onto the stage today, any Lebanese leaders worth their salt must be wondering whether — and how — to help the Lebanese people cope with crises while also reforming over time. They’ll find it difficult to implement transformational or even reformist policies. Even the least politically problematic options will prove unpopular among the Lebanese, or segments of the Lebanese, accustomed to the subsidized stability of the past 30 years. Meanwhile, the same half-dozen robber barons who made this mess remain perched atop a constitutional-political order, retain control over state institutions, and command the support of hundreds of thousands of Lebanese.

Lebanese leaders, and friends of Lebanon, must think holistically about fiscal, financial, monetary, and socio-economic challenges. Accepting that they’re beyond miraculous salvation, Lebanese leaders may still sequence short-term and long-range measures properly to help reduce the harm for people who will bear the burdens of action, inaction, or indecision. They must hope and work for change — while, incidentally, trusting and believing in themselves to remain committed and engaged in the longer run — even though they can neither transcend nor transform the conditions created by their predecessors in power.

Drawing from a “plethora of rescue plans,” Lebanese leaders must accept — as they seem to have accepted — that they’re now just trying to make the best out of a bad situation. To help people cope with the crisis while pursuing change over time, they may try to cut costs, raise revenues, rearrange debt, secure support, and/or otherwise make moves to avoid a complete collapse — even if such moves risk propping up a cast of characters, let alone the system in which they operate, that citizens have been attacking since October 2019.

Lebanese leaders must act to obtain immediate relief, begin interim realignment, and sow the seeds of longer-term change. And the Lebanese people, from serial activists and civil society leaders to common citizens, must find the sweet spot between chasing change and coping with crisis.

The Lebanese face an ironic, impossible truth: after 50 years of war, occupation, and feuding, their merchant republic’s coming crisis — and real reckoning — may be about money. They must first help each other cope with crisis, before they — with all their hope, anger, and fear — take on the next great task in their lives.

Anthony Elghossain is a lawyer, writer, and non-resident scholar at the Middle East Institute. His first book, They Came in Peace: American Adventures in the Levant, is due out in 2021.