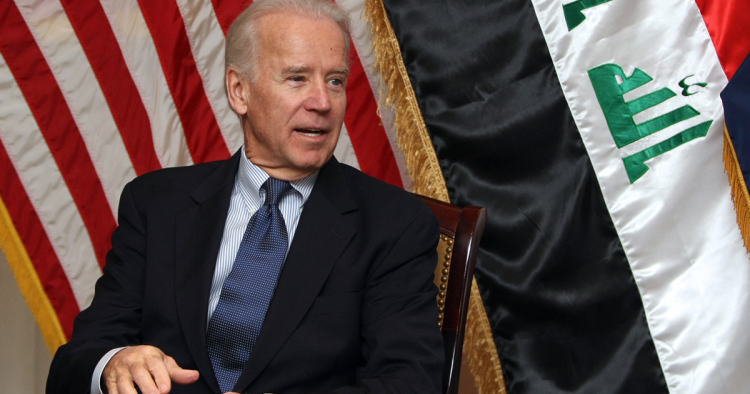 Joe Biden is no stranger to Iraq and this informs how Iraqi politicians have responded to his victory in the U.S. presidential election. Some have welcomed the news, while others are more cautious given concerns that a Biden presidency might lead to greater Iranian influence in the country. Indeed, Biden has a mixed record on Iraq. Though a Democrat, he voted for the 2003 Iraq War. But later as vice president, he was President Barack Obama’s right hand and fast-tracked their campaign promise to withdraw U.S. troops in 2011. Looking ahead to his presidency, his familiarity with the political class in Baghdad, forthright proposals about Iraq’s territorial integrity, and previous role in tipping power between major actors may falsely lead to a conclusion that Iraq will be a focus for his upcoming administration. The reality, however, is much different.

The state of U.S.-Iraq relations

Iraq itself is in a precarious position. Politically, after more than a year of upheaval, the country is finally gearing up for unpredictable parliamentary elections next year that could either bring forth a young, brave, and reform-minded generation of politicians or see the existing malicious practices of elitism, corruption, and poor governance recycled once again. Financially, Iraq’s rentier economy is on the verge of collapse due to diminished oil revenues — despite temporary assistance from unprecedented domestic borrowing and budgetary tinkering. As the situation continues to worsen, Iraq is slowly approaching the same perilous fate as Lebanon. The government’s inability to provide a welcoming environment to attract foreign investment and to adopt free market economics means Baghdad has little room to compete for capital regionally.

U.S.-Iraqi relations nearly hit an all-time-low in September as Washington threatened to close its embassy in protest against the Iraqi government’s recurring failure to stop daily rocket attacks by pro-Iran groups. While the crisis was short-lived, the threat left Iraqi pundits in disarray. The timing was especially unexpected given that it came just a month after a well-choreographed bilateral meeting between President Donald Trump and Prime Minister Mustafa al-Kadhimi and the signing of $8 billion in energy sector agreements between the two countries, and after both sides had participated in the U.S.-Iraq Strategic Dialogue for months.

To Iraqi observers, despite the rhetoric about a close bilateral relationship, it is clear that the U.S. still views Iraq as a pawn in a larger geopolitical game with Iran. However, with the change in administration, many believe that Biden could take the weight of unrealistic Trump-era expectations over the “maximum pressure” campaign against Iran off of Baghdad’s shoulders. Yet, blame for the current state of affairs goes both ways. Baghdad has failed to balance American and Iranian influence for 17 years. Instead, it has marginalized its own sovereignty and reduced itself to a battleground for outside powers. As for Washington, its policy toward Iraq has morphed from one administration to the next in accordance with its broader regional priorities. Washington’s constantly changing approach is a stark contrast to Tehran’s steady, clearly defined, and confident strategy in the country, especially in the Shi’a south.

Within Iraq, the Kurds see Biden as an “old friend” who could help them score concessions from Baghdad. Erbil’s economic problems are far worse than those in the rest of the country. The Kurdistan Regional Government (KRG) can barely cover public sector payroll and is heavily indebted, despite its agreement with Prime Minister al-Kadhimi on border crossings, budgetary allocations, and security arrangement in Sinjar. Furthermore, Erbil-Baghdad relations are expected to deteriorate after Iraq’s federal Parliament passed a $10 billion budget deficit relief package without Kurdish participation, obliging the KRG to hand over an undetermined amount of historically contested oil production to Baghdad in exchange for a share of the federal budget. Under Biden, while the KRG may return to employing effective lobbying practices in Washington and may have Democratic ears in the Senate and White House, it is unlikely that a Biden administration would go as far as supporting Kurdish independence, like some on the fringes may think. At the end of the day, there would be major geopolitical ramifications for Ankara and Tehran if Iraq’s territorial integrity is jeopardized, and Biden is unlikely to take that gamble.

As for the rest of Iraq, Sunnis have solidified political and self-governance gains in the last couple of years. Anbar is going through an ambitious reconstruction campaign, and life is slowly returning to normal in Mosul, despite challenges. Americans do not want to threaten this progress in the fragile and conflict-prone west and northern Iraq, especially as the threat of ISIS and radicalization is still looming. Moreover, Iraq’s Sunni Arabs see in Washington a long-term ally against Iranian influence in their territory. However, the Sunnis are divided between many centers of power. Until recently the strongest was around Parliament Speaker Mohammed al-Halbousi, but he is also facing competition from a newly formed Sunni bloc led by former speaker Osama al-Nujaifi and controversial parliamentarian Ahmed al-Jabouri with rumours of Iranian and Turkish backing. As money creates allegiances in Sunni tribal areas, foreign involvement in Sunni affairs is a persisting concern. Under Biden, it remains unclear whether the U.S. would be willing to get involved or invest in these local rivalries.

In Shi’a southern Iraq, Washington has locked itself out. Practically speaking, the Americans have conceded the mass of Iraq’s Arab population and bulk of the country’s resources to Iranian influence. Even members of the active protest movement in Basra and Dhi Qar against the ruling Shi’a elites and their backers are disheartened by Washington’s legacy of failure and are wary of any possible future U.S. engagement in the south. They see Washington and Tehran as equally responsible for their dire situation, which is the result of years of mismanagement by Iraqi officials who came to power on the back of agreements and concessions between the two countries. Biden’s track record in Iraq suggests it is unlikely that the U.S. will reverse course in the south.

The reality is that the new Biden administration will have more pressing concerns to deal with in the Middle East. Primarily, they will likely attempt to mend relations with Iran, including a possible return to the 2015 nuclear agreement, with the desperate hope of curbing Tehran’s resolute regional ambitions. In addition, they must also contend with a newly strengthened Ankara that has its own territorial, political, and economic interests and influence. Adding further complications, young and assertive GCC leaders will not be shy of affirming their own power, even if it is by military means, as the conflicts in Yemen and Libya have shown. With Baghdad on the sidelines, Iraq is destined to continue to be a mere part of a broader and more complicated game, mainly with Tehran.

Biden has often defended his position and previous involvement in Iraq against criticism. However, this only added to the Obama-era view of Iraq as a “Bush mistake” and may make the president indifferent to Iraqi dynamics — which could have dangerous ramifications for global security. Yet, a more pressing question looms as well. Even if the U.S. were to make greater concessions on Iraq to Iran or even Turkey, does Washington have any leverage left to cede at this point?

Moreover, Iraq’s position in Biden’s Middle East policy will be to a great extent determined by staffing choices in the State Department and White House. While Biden himself has bypassed the State Department before on Iraqi affairs, given the plethora of challenges he will face both at home and abroad, his decisions on Iraq are likely be guided by bureaucrats. This dynamic creates an opportunity for Baghdad to play a proactive role in reshaping U.S. policy toward the country, especially if the new administration brings onboard seasoned diplomats familiar with the Iraqi scene. The dynamics will also be shaped by the new players that will come out of Iraq’s parliamentary elections next year, if indeed any are elected. More crucially, Biden’s presidency is a chance to potentially remedy previous American mistakes in Iraq, revise his legacy there, and for Baghdad to be finally heard in Washington.

Yesar Al-Maleki is a non-resident scholar at MEI, energy economist, and Middle East observer with an extensive knowledge of the intertwining subjects of energy, geopolitics, and economics in the region. He is the managing director of the Iraq Energy Institute (IEI) in Baghdad, where he leads research programs on Iraq’s and Iraqi Kurdistan's oil, natural gas, and power sectors, as well as water and environmental challenges, economy, and politics. The views expressed in this piece are his own.