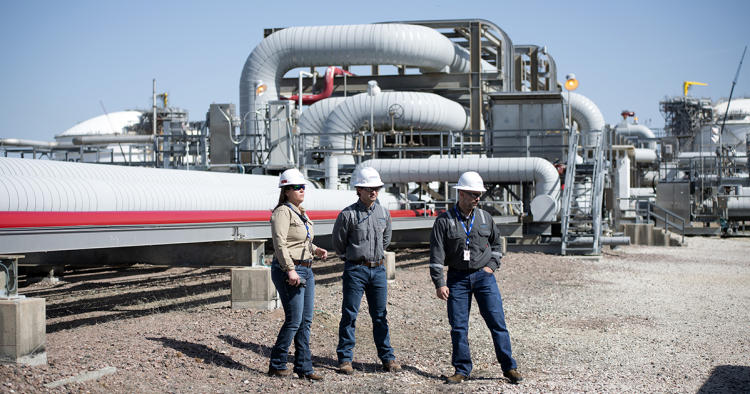 On March 25, 2022, President Joe Biden announced an agreement committing the U.S. liquefied natural gas (LNG) industry to supply an additional 15 billion cubic meters (bcm) of LNG to Europe through the remainder of the year. The agreement also envisions U.S. LNG increasing supply to Europe to 50 bcm through 2030, equating to approximately one-third of the European Union's (EU) gas imports from Russia in 2021. Interestingly, while well received by European allies and the U.S. LNG industry, the announcement may never have been discussed with the industry. One leading U.S. LNG player, Charif Souki, the head of developer Tellurian, told The New York Times, "I have no idea how they are going to do this, but I don't want to criticize them, because for the first time they are trying to do the right thing." The question now is how will the U.S. government, in a free market, direct commercially independent companies to ship LNG to Europe?

The U.S. LNG industry emerged in 2016 when Cheniere became the first company to export LNG into the world market. Today the U.S. is one of the top three global LNG producers and is set to become the number one supplier later this year, surpassing LNG export giants Qatar and Australia. The U.S. LNG industry has grown by reshaping the conventional LNG business with a sharp focus on commercialization. The industry has been compartmentalized with companies focusing on liquefaction and product sales, leaving upstream resource development and the midstream to others. The development and construction of liquefaction plants are now commoditized.

Commercially, the U.S. LNG project developers have sold their product primarily to portfolio players, such as Shell, BP, Total, Trafigura, and Vitol, and the Asian market, retaining little uncontracted LNG volume for themselves to be sold on the spot market. The long-term contracts with high credit buyers were required to underpin project financing. With little uncontracted spare LNG volume and long-term contracts, the project developers have little flexibility to direct material volumes to the European market today.

Looking ahead: The LNG sellers

The U.S. LNG sector is poised for more growth with several projects in development and others in the construction phase. At least six projects plan to take the final investment decision (FID) in 2022. Should that occur, the U.S. would add a minimum of 84.0 million tons per annum (Mtpa) by 2026. However, the reality is that several projects will not reach FID due to project execution uncertainty and lack of offtake agreements. In fact, it is likely that only 25% (21.7 Mtpa) of the forecasted 84.0 Mtpa will materialize in time to deliver LNG to the European market by 2026.

The U.S. LNG project queue is long, with projects in various stages of development. New projects have not secured offtake agreements for 100% of the LNG volume, which implies that some volumes are still "for sale" to European buyers. Two major projects currently under construction, the Qatar Energy/ExxonMobil Golden Pass LNG (first LNG 2024) in southeast Texas and the Shell-led LNG Canada (first LNG 2024) in British Columbia, took FID without contracting their LNG volumes. Instead, the parties committed to take LNG volumes into their portfolio. The two projects will deliver more than 29.0 Mtpa into the market and offer the European market much-needed LNG in the near term, provided, of course, buyers and sellers reach a commercial agreement on sales price, contract terms, and tenor.

Thus far, 29.0 Mtpa will come onto the market from the two projects under construction (Golden Pass LNG and LNG Canada), and an additional 21.7 Mtpa by 2025 from projects that have a reasonable chance of reaching FID in 2022. This equates to approximately 50.7 Mtpa of new LNG volumes expected to enter the market by 2025. Of that total, 29.0 Mtpa were uncontracted at project FID. Contracted volumes and the buyers for the 21.7 Mtpa to be delivered from projects expected to reach FID in 2022 are unknown. This suggests that significant volumes of North American LNG are expected to be available to European buyers for delivery in the middle of this decade. Another 62.0 Mtpa can possibly mature; however, these projects face significant commercial challenges. Reaching FID in 2022 may not transpire, thus delaying first LNG dates to the late 2020s, assuming they reach FID at all.

U.S. LNG developers are also trying to decipher the Biden administration's energy strategy. With initial efforts focused on limiting any hydrocarbon-based project development, the industry prepared for the challenges of permit approvals, project sanction, and changes to operating regulations. Over the past month, however, the administration has publicly offered U.S. LNG to Europe but continues to limit upstream permits. As U.S. LNG plants develop, additional gas resources will be needed. Thus, upstream permits will be essential to long-term U.S. LNG supply growth.

Looking ahead: The LNG buyers

The market needs to absorb any additional U.S. LNG volumes. Since the Biden administration stated increased volumes would go to the European market, one must ask where the LNG buyers are. As noted, long-term contract pricing must support sufficient economic returns for project developers, and U.S. LNG supply will be competing with forecasted new Qatar LNG supply, which will likely have a lower cost basis. Portfolio buyers will continue to take competitively priced LNG, as will the conventional Asian tram line buyers. The European buyers will need to compete for volumes, and U.S. LNG will need to compete for buyers.

Several project developers have expressed concern over the long-term nature of the European market. While European buyers have recently attended U.S. LNG industry events, the EU does not hold a consistent view. Some countries have expressed concern about greenhouse gas emissions and the carbon footprint of new LNG volumes. Others have commented that termination of Russian piped gas supply will actually reduce greenhouse gas emissions due pipeline leaks. Project developers are concerned that the EU will seek U.S. LNG during the Ukraine crisis but may not desire long-term LNG supply, opting to revert to "greener" options once the crisis passes and leaving U.S. LNG suppliers with short-duration contracts. U.S. LNG suppliers have raised questions about whether this is just a temporary change or if the EU is shifting back to gas and slowing its green energy strategy. Smarter and possibly smaller LNG projects (3-5 Mtpa) that require two to three offtake contracts to reach FID may have a competitive advantage over large-scale conventional LNG projects (10-12 Mtpa), which require significant offtake volumes (7-10 Mtpa) contracted to secure FID and take longer to construct.

A window of opportunity exists for U.S. LNG project developers. The Biden administration promise to deliver more U.S. LNG to Europe will require an increase in LNG export capacity. Companies that have a site, strong feed gas supply strategy, federal and state permits in hand, and an engineering, procurement, and construction contract ready to execute can move quickly to ensure first LNG delivery prior to the 2030 deadline. The U.S. LNG project portfolio can deliver additional LNG volumes to Europe by 2030 but those project developers need to ensure project delivery/first LNG dates prior to 2030 and secure offtake contracts with the European buyers.

Until the mid-2020s, European buyers will need to secure LNG supply from the global spot market, Asian customers who may be long in supply, portfolio players, and U.S. LNG suppliers with minimal spare volumes. While the Biden administration announcement is positive for the industry, there are many steps to take before the promised LNG volumes materialize.

Wayne Ackerman has more than 30 years’ experience in the upstream exploration and production sector and major capital project development, including LNG. He is also the founder and president of Ackerman and Associates Global Consulting, LLC, and a member of the Advisory Council for MEI’s Program on Economics and Energy. The views expressed in this piece are his own.

For more details on approved but not yet built and proposed LNG export terminals, please see the full set of LNG export maps from FERC.