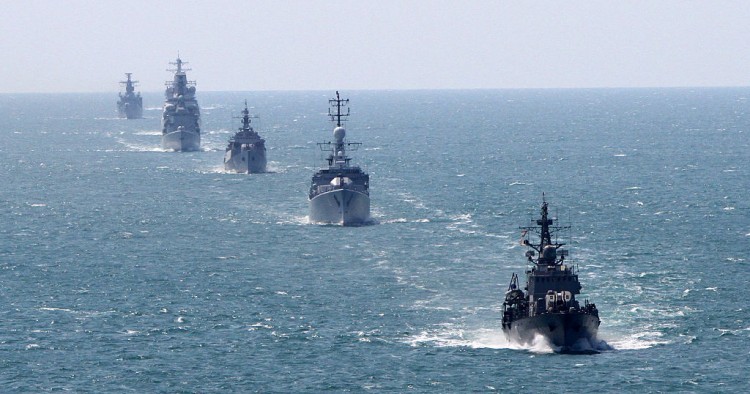 The Black Sea sits at an important crossroads between Europe, Asia, and the Middle East. Oil and gas pipelines, as well as fiber-optic cables, run along the bottom of the sea, while on the surface hundreds of ships crisscross it daily moving people and goods. For centuries the Black Sea has been fought over by some of the world’s major empires. Throughout history, it has proven to be one of the most geopolitically and economically important locations in the broader Eurasian region.

Even for a country located thousands of miles away, like the United States, the Black Sea is important. For the U.S., its strategic importance is primarily derived from two issues.

The first is America’s treaty obligations under NATO. Three of six Black Sea countries (Turkey, Bulgaria, and Romania) are in NATO. Another two countries (Ukraine and Georgia) participate in NATO’s Partnership for Peace program, and Georgia is also an official NATO candidate.

These countries are particularly important because they demonstrate the political will to deploy troops in support of NATO operations. For example, Turkey, Bulgaria, Romania, Ukraine, and Georgia collectively contribute one-third of all the European forces serving in NATO’s Resolute Support mission in Afghanistan.

Russia’s Black Sea ports, as the country’s only warm water ports, have always served its economic interests. For example, on the eve of World War I, 50 percent of all Russian exports, and 90 percent of its agriculture exports, passed through the Bosphorus out of the Black Sea. Today, every 15 minutes an oil tanker makes the same trip carrying Russian or Kazakh oil (the latter, of course, transits Russia so Moscow receives transit fees).

Russia also uses its Black Sea bases, many of which are located on the occupied Crimean Peninsula, to stage military operations further afield, such as Syria.

At the heart of Russia’s presence in the Black Sea is its illegal occupation of Crimea.

When Kremlin-backed Ukrainian President Viktor Yanukovych failed to sign an association agreement with the European Union in 2013, months of street demonstrations followed, leading to his ouster in early 2014. Russia responded by violating Ukraine’s territorial integrity, sending troops to occupy the Crimean Peninsula under the pretext of “protecting Russian people.” This led to Russia’s eventual annexation of Crimea.

Russia’s annexation of Crimea is an unprecedented act of foreign-state aggression in the 21st century. It was the first time that borders in Europe had been changed by military force since 1945. Crucially for Moscow, the annexation has de facto cut Ukraine’s coastline in half and has essentially turned the Black Sea into a Russian-controlled lake.

Russia has taken steps to strengthen its grip on Crimea and boost Moscow’s military footprint in the Black Sea region. As described in The Heritage Foundation’s 2019 Index of U.S. Military Strength:

Russia has deployed 28,000 troops to Crimea and has embarked on a major program to build housing, restore airfields, and install new radars there. Deployment of the Monolit-B radar system, for instance, which has a passive range of 450 km, “provides the Russian military with an excellent real-time picture of the positions of foreign surface vessels operating in the Black Sea.” In addition, “Russian equipment there includes 40 main battle tanks, 680 armored personnel carriers, and 174 artillery systems of various kinds,” along with 113 combat aircraft. In March 2019, Russia announced the deployment of nuclear-capable Tupolev Tu-22M3 strategic bombers to Gvardeyskoye air base in occupied Crimea.

Control of Crimea has allowed Russia to use the Black Sea as a platform to launch and support naval operations in the Eastern Mediterranean in support of Syrian President Bashar al-Assad. For example, in the early days of Moscow’s intervention in Syria, the Moskva, a Russian navy guided missile cruiser, played a vital role in providing air defense for Russian forces.

It is worth pointing out that Crimea is not the only Russian occupation along the shores of the Black Sea. Since Russia’s invasion of Georgia in 2008, Moscow has maintains a large military presence in the Georgian region of Abkhazia — estimated to be around 4,000 troops — which has hundreds of miles of coastline on the Black Sea.

For the U.S. and its allies, operating in the Black Sea presents a number of challenges — especially for those countries that are not Black Sea littoral states. Russia’s anti-access and area-denial (A2/AD) capability is not the only thing that makes operating in there a challenge. Additional diplomatic and political factors further complicate the matter.

The 1936 Montreux Convention limits the presence of non-Black Sea littoral states. The convention gave Turkey control over the Turkish Straits and placed limitations on the number, transit time, and tonnage of naval ships from non-Black Sea countries that may use the strait and operate in the Black Sea.

Soon after Russia’s invasion of Ukraine, the U.S., along with several other NATO members, stepped up its presence in the Black Sea. But since then, this presence has been drastically reduced. For example, in 2014 the U.S. Navy spent a total of 203 days in the Black Sea. Last year it was 126 days. While NATO Secretary-General Jens Stoltenberg pledged an increase of NATO ships to the Black Sea in February 2017, this has yet to happen.

America can take a number of steps with NATO to safeguard its political, economic, and security interests in the region. Firstly, the U.S. should be a leader inside the Alliance in calling for the creation of a NATO Black Sea Strategy. The Alliance needs to develop meaningful ways of working with Black Sea littoral states to improve regional security. Many of the recent initiatives at the NATO level have not met expectations.

Secondly, the U.S. should encourage NATO to establish a Black Sea Maritime Patrol mission modeled on the successful Baltic Air Policing mission, in order to maintain a robust NATO presence in the Black Sea in line with the 1936 Montreux Convention. NATO’s interest in Black Sea security is increasing, but the overall presence of non-Black Sea NATO warships is decreasing. Such a force would require non-Black Sea NATO countries to commit in advance to a regular and rotational maritime presence in the Black Sea.

Finally, with U.S. leadership, the Black Sea can receive the appropriate focus as NATO undergoes its “reflection process” to determine its future role. The Black Sea is a very important region for NATO, and has not received the attention it deserves; a separate focused NATO strategy and support for countries in the Black Sea would send a message that the Alliance takes the region seriously.

Now is not the time for the U.S. and its allies to grow complacent. With U.S. leadership, the Black Sea can receive the appropriate focus and attention it deserves.