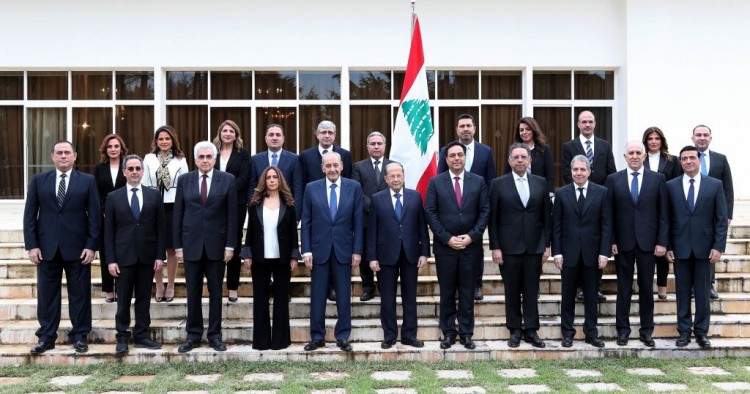 No amount of analytical nuance or ingenuity can challenge the conclusion that the newly formed government in Lebanon is Hezbollah’s creation. The only question left to answer is: why did Hezbollah do it?

Indeed, why did the Shi’a party put itself in a position of responsibility (at least technically) for a financial crisis the likes of which Lebanon has never seen, political division that is likely to rip the country’s system apart, and societal rage over terrible economic conditions that has started to turn violent?

One answer is that Hezbollah, along with its masters in Tehran and politically resurrected friends in Damascus, has decided to confront its adversaries — primarily the United States — by taking full control of politics not only in Baghdad but also in Beirut. One would be inclined to believe that this may all be part of a broader Iranian strategy to drive the United States out of Lebanon, Iraq, and possibly elsewhere in the region. This at least remains the wish of Tehran’s leaders, who lately have articulated it in public.

But does this confrontational stance, at least in Lebanon, have any legs, really?

Even generous assessments of the economic situation in Lebanon warn that the country is simply incapable on its own of getting out of its enormous economic hole and specifically without a major influx of foreign cash — some say anywhere between $5 billion and $20 billion — into its banks. A program with the International Monetary Fund, which could stabilize the economy and limit corruption, is no longer a preference, but rather a necessity.

Yet no Western power, least of all Washington, is likely to entertain helping a government in Beirut that’s totally dominated by Hezbollah. Maybe the French, out of love for the tiny francophone country or concern over the ramifications of complete anarchy that could generate another refugee crisis, might step in. But that’s improbable, unless they have decided that the costs of parting ways with the Americans on Lebanon policy are bearable. Washington’s senior diplomats have made it crystal clear to everybody that there will be no bailout for Lebanon in the absence of credible reforms.

What about the wealthy Arab Gulf monarchies? Don’t count on Saudi Arabia, whose main man in Beirut, former Prime Minister Saad Hariri, resigned in October 2019 following street protests and was unceremoniously left out of the new cabinet. The United Arab Emirates and Kuwait have no traditional roles or equities in Lebanon to speak of, and Bahrain and Oman have neither the money nor the inclination to get involved.

This leaves Qatar, which can bail out Lebanon by itself given its immense wealth. That’s, of course, if it wants to. Every now and then, Doha will dabble in the politics of Lebanon either to gain influence or piss off the Saudis, or both. The Qataris might do it again, but like the French, they may face the wrath of Washington. Staying away from Lebanon could also help them preserve a timid process of rapprochement with Riyadh after years of political feuding.

Iranian financial assistance is not an option either. If anything has worked in the Trump administration’s Iran policy, it is its strangulation of the Islamic regime’s economy. Tehran is having a hard time containing its angry streets and addressing its people’s economic grievances; it doesn’t have more money to spare.

So, unless the key foreign actor that can provide Lebanon with an economic lifeline — that’s Washington — entertains pragmatism, the chances of this new Lebanese government succeeding are remote. Again, it’s hard to see that happening given the administration’s relentless “maximum pressure” campaign against Iran, but it’s not unthinkable. After all, U.S. officials have publicly stated throughout this crisis that they are more concerned about the reform agenda of the next Lebanese government than its composition. That’s interesting, because for the past few years, Washington’s singular focus in Beirut has been the number of ministers Hezbollah has in the government. In private, one current American diplomat mentioned this past week, quite remarkably, that the United States might consider working with the newly formed government if it commits to meaningful reform. Let’s not overinterpret this because it’s not consistent with the wish of U.S. Secretary of State Mike Pompeo or the Middle East team of advisors in the White House. But let’s also not totally dismiss it.

Hezbollah must have known before sealing the cabinet deal that the road ahead will be incredibly difficult, if not impossible. Maybe it is looking for immediate wins in security, as Paul Salem persuasively argued. Placing confidantes at the head of state security institutions, except for the army, which is still led by Gen. Joseph Aoun (for now at least), might give Hezbollah better visibility on threats to its interests and possibly avert Soleimani-like assassinations of its leaders.

An even more cynical, though highly probable, view suggests that Hezbollah threw this new cabinet team of pseudo-specialists (ok, fine, some including new Lebanese Foreign Affairs Minister Nassif Hitti are more respected than others) into the fire knowing they will fail so it can tell the protestors that the technocratic solution for which they’ve called all along is bogus. The protestors won’t buy it, but Hezbollah will try it anyway.

Hezbollah also understands that it can’t govern alone for the long term. At some point, it will have to bring back at least Saad Hariri to the political process to fend off the specter of Sunni-Shi’a conflict in the country and prevent the reemergence of Sunni radicalism. Of course, the Lebanese demonstrators calling for the ouster of all corrupt leaders couldn’t care less about the return of Hariri, but if it’s not apparent by now, their wishes will take a back seat to backdoor politics by the sectarian leaders. The protestors just don’t have the numbers, unity, organization, or program to force a credible alternative to a confessional system that’s been the backbone of Lebanese politics since the very formation of the republic in 1943.

So, is this a “transition government,” or have Hezbollah and its allies dug their heels and decided to go all-in with their confrontation with Washington? Either way, there’s one sure loser: the courageous protest movement that’s fed up with the country’s rotten politics.

Bilal Y. Saab is a senior fellow at the Middle East Institute and the director of the Defense and Security Program.