Can Russian-Iranian alignment in Syria last? 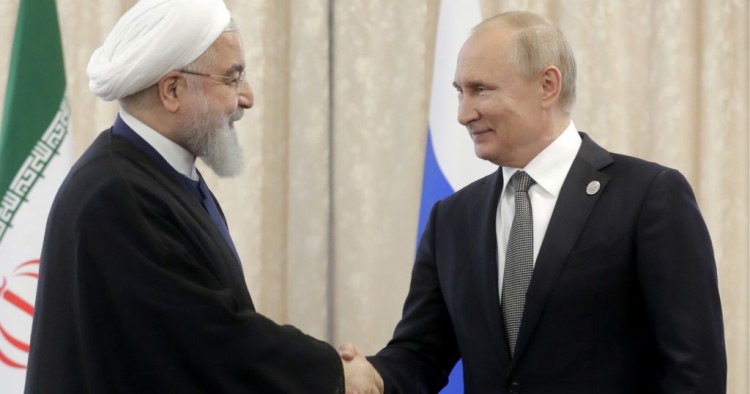 When the Syrian civil war was raging in 2015 and the survival of the government in Damascus was at stake, no two foreign actors did more to prop up President Bashar al-Assad’s regime than Iran and Russia. The Iranians supplied the manpower on the ground by mobilizing a steady flow of paramilitary forces that took on Syrian rebels in some of the war’s most strategic battles while the Russians provided much-needed air cover that ultimately turned the tide in favor of Damascus. Notably, it was also Tehran that persuaded Moscow to step in if it did not want Syria, its long-standing ally, to fall into the U.S. orbit and change the broader balance of power in the region, a likely potential outcome if the rebellion had managed to unseat Assad.

The strategic stakes were too high for both Russia and Iran to let foreign-backed Sunni Islamists topple Syria’s Baathist order, so the civil war led to unprecedented alignment and convergence of interests between the two countries on regional security. Yet now with the Syrian government consolidating its gains, there is good reason to expect Moscow and Tehran’s divergent agendas, strategic differences, and conflicting interests to come to the fore, perhaps creating new geopolitical dynamics in “post-conflict” Syria.

While the Turkish military offensive against the Kurdish-led Syrian Democratic Forces (SDF) in northern Syria might, once again, bring Moscow and Tehran together tactically in support of Assad’s rule and Syrian sovereignty, the two powers have fundamentally different visions for the war-ravaged country’s future.

Moscow sees Syria in the broader framework of its global role as a major power in an emerging post-American multipolar system, where wielding influence and maintaining a favorable balance of power in the Middle East continue to matter considerably. A stable and secular, if authoritarian, Syria is key to creating a Russian or Russia-friendly — as opposed to an “American” — order in the region, which arguably requires maintaining good relations with all major actors, including those at odds with one another, such as Iran on the one hand and Israel and Saudi Arabia on the other.

Moscow can thus be the region’s most plausible and effective powerbroker and mediator while ensuring that no regional stakeholder will challenge its authority and threaten its strategic interests. It is no wonder that the Kremlin has been facilitating the Assad government’s reintegration into the Arab fold, which for the most part fell out with Damascus over its violent suppression of predominantly Sunni revolutionaries and rebels. Indeed, it was on the back of Russian successes in Syria and its resulting growing influence in the Middle East that Moscow came up with a new “security concept” for the Persian Gulf. “The central long-term objective,” according to the document, “is the creation of a security and cooperation organization in the Persian Gulf that would include, in addition to the Gulf countries, Russia, China, the U.S., the E.U., India, and other stakeholders as observers or associated members.” With this in mind, it might be safe to say that a Russia-centric status quo ante bellum would be an ideal scenario for Moscow in post-war Syria, through which it can project power across the wider region, including the Mediterranean.

Iranian plans for post-conflict Syria, by contrast, are less ambitious yet more radical. Tehran has expended too much blood and treasure to simply be content with anything like the pre-war status quo, whereby Syria served as the Islamic Republic’s gateway to the Arab world and helped it project power in Lebanon through Hezbollah. Iran also seems determined to forge a new layer of deterrence in its asymmetrical regional security structure by using Syria as a forward base to balance against Israel. This is what has come to be known as Iran’s policy of “strategic depth” — that is, to take the fight as close to enemy territory as possible.

Such an ambition, however, does not dovetail well with the Russian vision, which attaches great importance to close ties with Israel and considers Israeli security essential for the viability of its regional strategy. This partly explains why Moscow has mostly tried — to Tehran’s frustration and occasional objections — to look the other way as Israel has continued to target Iran-linked positions and paramilitary forces in Syria and beyond.

In January, Russian Deputy Foreign Minister Sergei Ryabkov rebuffed the idea of an “alliance” between the two powerbrokers in Syria, cautioning that, “I wouldn't use this type of words to describe where we are with Iran.” His unprecedented comments came only one day after Heshmatollah Falahatpisheh, then head of the Iranian parliament’s National Security and Foreign Policy Committee, inveighed against Russia for allegedly de-activating its S-300 missile defense systems in Syria during Israeli aerial operations. “It appears there is some sort of coordination between Israeli strikes and the Russian air defense units based in Syria,” he said.

The Iranian leadership has concerns that the Kremlin may potentially seek to negotiate side agreements with its adversaries such as the U.S., Israel, Saudi Arabia, and the UAE on the Syria file that could undermine Tehran’s interests. Given that Russia shares those actors’ concerns about the role of Iranian-sponsored Shi’a militias — such as Lebanese Hezbollah, Fatemiyoun Division, and Liwa Zeinabiyoun — Tehran and Moscow are at odds over their role in Syria. Although Moscow has coordinated military operations with some Iranian-backed militia forces in key battles against ISIS, the relative erosion of the so-called caliphate might partly account for the Kremlin’s condoning of Israeli attacks against these groups in Syria and Iraq.

Moscow also regards post-war reconstruction in Syria as a unique opportunity to consolidate its economic interests in the Levant by securing lucrative long-term concessions and boosting the presence of Russian state-affiliated and private sector businesses, in areas from mining to oil exploration to industrial manufacturing. This constitutes yet another major area of competition between Syria’s two main state allies.

In January 2017, Iran and Syria signed five memoranda of understanding, including contracts for mining phosphate, supplying mobile phone services, and installing oil and gas terminals. Then, earlier this year, the Syrian government reportedly leased to Iran the Latakia container port, Syria’s main commercial port, and the two countries have plans to build a power plant in the city as well. Unsurprisingly, Moscow has been holding negotiations with Damascus to finalize the lease of the Tartus port, which already hosts a Russian naval base on the Mediterranean, for 49 years.

For Syria, the stakes are high when it comes to Russia and Iran’s future of (un)alignment. Whether the Syrian Arab Army (SAA) returns to its Cold War roots in which it mimicked the Red Army more than any other force in the Arab world or moves in another direction whereby Iran’s paramilitary activity in Syria becomes increasingly institutionalized is difficult to predict. Yet this question will heavily impact the future of Syria as the Assad government continues to consolidate its battlefield victories while reintegrating into the region’s diplomatic fold.

Turkey’s Operation Peace Spring against the People’s Protection Units (YPG) in northeast Syria will likely unify Russia and Iran temporarily in a predictable joint effort to prevent the resurgence of ISIS, whose jailed fighters have found an opportunity in the ensuing chaos to stage a comeback. At the same time, the incursion has presented a tough dilemma for Tehran, now that Syrian government forces have been dispatched to the north to defend SDF-held areas, raising the likelihood of direct confrontation between Syria and Turkey, both of which have close ties with Iran. Tehran is reluctant to intervene with its Shi’a militia forces and confront Turkey directly on behalf of Assad, partly because it does not want to alienate Ankara at a time of U.S. “maximum pressure,” preferring instead to let others take care of the situation.

While the Islamic Republic is opposed to Kurdish autonomy in northern Syria, it cannot afford to let a Turkish-led rebel statelet be established in the north, from which the anti-Assad alliance can project power in Iraq and north Lebanon. It would disrupt the broader balance of power and undermine the plausibility of Iran’s regional ambitions centered on a unified and friendly Syria.

Much to Tehran’s relief, Russian military police units have already taken positions along the Turkish-Syrian border, but the need to halt the current escalation through negotiations and diplomacy will inevitably boost Russia’s influence in its relatively silent competition with the Islamic Republic over a greater share of concessions and resources in “post-conflict” Syria.

In sum, notwithstanding how these recent developments in northern Syria are pushing Tehran and Moscow closer together, the underlying Iranian-Russian rivalry is expected to persist unabated. As the pressure on Damascus from Moscow and Tehran continues, the distrust between Russia and Iran could be further exposed. In fact, the two countries were never natural partners in Syria. Rather, they joined forces due to converging interests created by an existential threat to their mutual ally. While the road ahead in Syria is anything but smooth and stability across the war-ravaged country remains elusive, a tug of war between Moscow and Tehran will likely ensue as fundamental questions about Syria’s post-war state institutions, economic interests, and security apparatus are yet to be fully addressed.

Maysam Behravesh is a senior political analyst at Persis Media and a PhD candidate in the Department of Political Science at Lund University, Sweden. Giorgio Cafiero is the CEO and founder of Gulf State Analytics, a geopolitical risk consultancy based in Washington, DC. The views expressed in this article are their own.