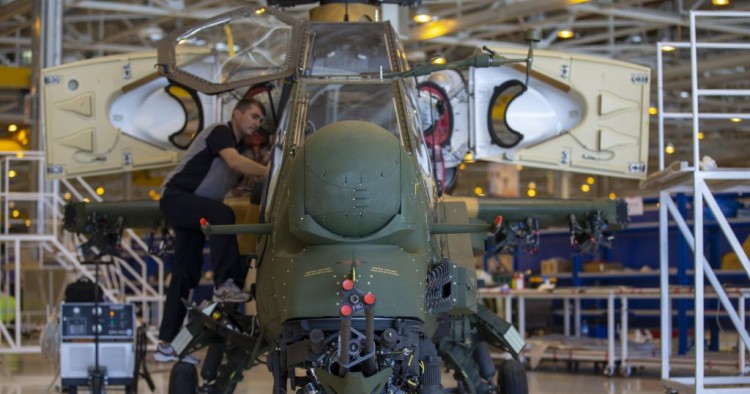 Building up Turkey’s defense industry has long been a priority for the government of President Recep Tayyip Erdogan, and it has made considerable progress to date. Turkey is now the world’s 14th largest defense exporter, accounting for 1% of total global exports, according to the Stockholm International Peace Research Institute (SIPRI). Despite its success, the industry is now facing growing pains, and challenges like brain drain, a currency crisis, dependence on foreign suppliers, and regional political disputes could hamper growth going forward.

Efforts to build up Turkey’s defense industry date back to the 1970s. In 1974, against the backdrop of the Cyprus crisis, Washington imposed an arms embargo on Ankara, its NATO ally. Having long relied almost entirely on NATO and other foreign producers to supply its military, Turkey suddenly found itself in a precarious position. The situation served as a wake-up call for the country and a turning point in the development of a national defense industry. The Turkish authorities decided to build up the country’s capabilities with the goal of reducing its dependence on foreign suppliers and meeting the needs of the armed forces locally.

As the number of defense companies grew, the government established the Undersecretariat for Defense Industries (SSM) in 1985 to re-organize the sector. The SSM’s mission was to lay the groundwork for a modern defense industry and modernize the Turkish Armed Forces. Despite limited resources and other hurdles, the SSM has proven quite successful, enabling the industry to develop steadily over the past 34 years.

The sector only really took off over the last decade or so, however, driven by aggressive government policies designed to ensure Turkey’s self-reliance and boost its industrial exports. According to the Presidency of Defense Industries (SSB), the turnover of the Turkish defense and aeronautics sector rose from $1.85 billion in 2006 to around $6 billion in 2016. In other words, sales tripled in just 10 years. Over the same period, the sector’s exports rose from $487 million to $1.67 billion. However, for three consecutive years that decade — in 2014, 2015, and 2016 — exports didn’t break the $1.6 billion mark, raising concerns about the long-term sustainability of the industry’s rapid growth.

To re-vitalize the sector and boost exports, the government adopted new regulatory measures, bringing several local defense industry bodies under the office of the president, including, in 2017, the SSM and the Turkish Armed Forces Foundation (TSKGV), which is responsible for developing the national armaments industry and purchasing weapons, vehicles, and equipment. According to President Erdogan, the SSB was brought under his office to boost its potential and improve resource allocation and efficiency. The government has also repeatedly tasked the diplomatic corps with the mission of marketing Turkish military equipment abroad and finding new markets for its defense exports.

The year 2018 brought several important developments on this front. According to a report from SIPRI, Turkey, which it categorizes as an “emerging producer,” successfully crossed the $2 billion export mark. In fact, defense and aerospace saw the strongest export growth among all Turkish industries that year. The industry maintained the trend into early 2019, with a 64.4 percent rise in exports in January compared to the same period last year. Despite the impressive progress made over the last decade, the sector still has a long way to go to reach its targets, however.

According to the SSB, the government aims to “make the Turkish defense industry 100 percent independent by 2053, increase its export capacity to $50 billion, and have at least 10 Turkish defense companies among 100 biggest companies in the world.” Achieving these goals would require a huge effort. SIPRI warns that “a policy of ambitious arms export growth is difficult to implement in the long term; particularly as recent history has shown that arms exports by smaller exporters can fluctuate significantly,” citing examples like Sweden and Brazil.

Furthermore, Turkey also needs to overcome a growing list of challenges, including brain drain, the need for new markets and massive investment, political factors, dependence on foreign components, and the depreciation of the local currency. The last two issues are closely related, as many key components on which the industry relies are sourced from abroad and priced in foreign currency, increasing costs for local producers.

Brain drain is believed to be acting as a brake on development in some critical areas. The vast majority of people leaving are young, highly educated engineers, often with significant experience. According to an SSB survey, many of those who left the sector cited “limited chance of promotion and professional progress” as the primary reason, followed by low salaries.

Securing much-needed investment is another big challenge. In normal cases, this could be accomplished by opening the sector up to foreign investors, but given the industry’s connection with national security, this doesn’t seem to be an option. Interested investors would likely include the U.S., European countries, Russia, and China, which would have the effect of limiting Turkey’s defense independence. To overcome this, Turkey has established a partnership with Qatar, a small, rich country with which it has strong ties and which doesn’t pose a threat to Ankara. This partnership is expected to help secure funding to develop Ankara’s defense industry, on the one hand, while also boosting Doha’s defense capabilities, on the other, thus deepening the alliance between the two countries.

In December 2018, President Erdogan signed Decree 481, paving the way for the privatization of the Tank and Pallet Factory, which will be run by a Turkish-Qatari firm, BMC, for the next 25 years. The decision drew widespread criticism, but Erdogan defended the move, pointing to a projected added value of $5 billion a year and a $1 billion increase in exports, especially to Qatar. While Qatar’s involvement should give the sector a boost, the question remains whether it will be enough to help it reach its goals.

Even with Qatari support, finding new export markets may still prove difficult. Ankara’s top five markets for defense industry equipment in 2018 included the U.S. ($726.7 million), Germany ($226.1 million), Oman ($153.4 million), Qatar ($83 million), and the Netherlands ($75 million). Although Turkey entered new markets in 2019, such as Guatemala, Guyana, Tanzania, and Trinidad and Tobago, this list doesn’t include any of the world’s leading weapons importers, such as Saudi Arabia, Iraq, and Egypt. Accessing these markets will be vital to ensuring the sector’s long-term sustainability, but the political climate and Ankara’s various foreign policy disputes will likely make this a challenge for Turkish defense firms.

Politics may prove to be a major stumbling block for the sector. Many foreign customers do not distinguish between the government’s position on foreign policy issues and the Turkish defense companies’ interests as private entities. As a result, Turkish firms are unable to expand into certain markets, and are often sidelined at major regional defense forums.

Following the onset of the Gulf crisis in 2017, Saudi Arabia and the UAE canceled several contracts with Turkish defense companies as a result of the government’s support for Qatar. Turkey’s participation in the F-35 program may be threatened by politics as well. As tensions between Ankara and Washington rise over Turkey’s planned acquisition of the Russian S-400 missile defense system, it could impact Turkish defense firms, which are supplying $12 billion worth of parts for the F-35 program. The industry’s reliance on foreign components that require export licenses means that even major, high-profile deals, like the $1.5 billion 2018 agreement with Pakistan to supply Turkish-made T129 ATAK helicopter gunships, could be blocked if relations with the West deteriorate.

Although the government has high hopes for the local defense industry, and seems dedicated to realizing them, there are a number of obstacles that stand in its way. It is not clear yet how the government will address the mounting challenges; however, priority should be given to stopping brain drain, securing needed investment, and neutralizing the political factor. While overcoming these issues in a relatively short period of time could help the sector to continue to grow, failing to do so will negatively influence its prospects and could lead to a scaling back of activities and ambitions.