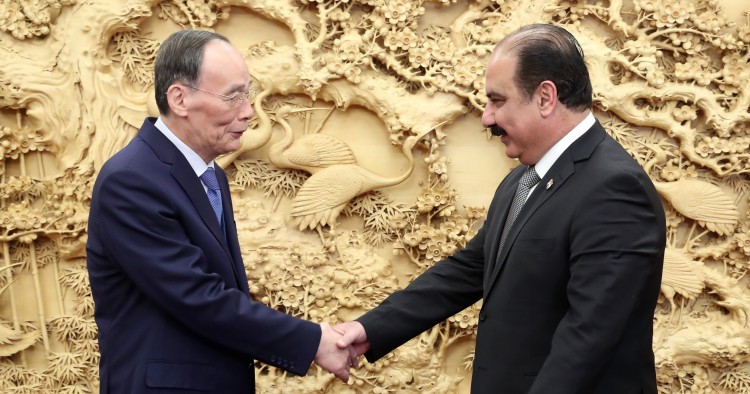 Since the beginning of the Syrian civil war in 2011, many analysts have examined the role played by a handful of key outside actors, such as Russia, Iran, Turkey, and the member states of the Gulf Cooperation Council (GCC). Yet China has received comparatively little attention in most discussions about the Syrian crisis. A deeper look at Sino-Syrian relations and Beijing’s policies vis-à-vis Syria is long overdue as this bilateral relationship is set to become increasingly important to both China’s ambitious foreign policy as well as the Syrian government’s vision for reconstruction and redevelopment.

The future of war-torn Syria matters to Beijing for a host of reasons. Having supported Bashar al-Assad’s government against both the anti-regime uprising and ISIS — albeit without being directly involved in the conflict militarily — China appeals to Syria as officials in Damascus seek to move on to the reconstruction and redevelopment phases of the “post-conflict” period. As Western-imposed sanctions continue targeting Syria, China will likely be an increasingly important global partner for Damascus that can help to counterbalance Western pressure.

Throughout the Syrian civil war, China has played a relatively low-profile role. Since the conflict broke out, Beijing has been cautious and pragmatic about its approach. China has been in alignment with Russia on major issues related to Syria, as illustrated by its votes at the UN Security Council (UNSC). Beijing’s positions have largely remained consistent, rooted in several beliefs on the part of the government: The Syrian conflict requires a political solution determined by the Syrian people; the country needs a political transition process; Syrian unity and national reconciliation are always priorities; and the international community must deliver humanitarian assistance to the country. Indeed, it was Beijing’s view that “Syria’s sovereignty, independence, and territorial integrity must be respected and upheld,” which prompted China’s Foreign Ministry to call on Turkey to “exercise restraint” shortly after Ankara launched Operation Peace Spring, a military incursion into northern Syria, in October 2019.

Beijing’s main concerns about militant jihadists and violent extremists outside of Chinese territory have historically focused on Afghanistan. For years, militant Uighurs from groups such as the East Turkestan Islamic Movement (ETIM) and the Turkestan Islamic Party (TIP) have crossed into Afghanistan, where they have purportedly plotted actions against the Chinese state. Yet with the rise of ISIS, China has begun to see Syria as its new main concern from a counter-terrorism perspective. While the exact figures are unknown, hundreds (if not thousands) of Uighurs from Xinjiang are thought to have joined ISIS in the Levant since the so-called caliphate’s rise to power in western Iraq and eastern Syria in 2014.

Beijing and Damascus have their own reasons for sharing intelligence on Chinese citizens in Syria within the framework of a growing bilateral partnership. From the Chinese perspective, the return of these militant jihadist Uighurs to Xinjiang following their time fighting with ISIS in Syria would be a nightmare scenario. As Beijing sees it, and as Chinese leaders are trying to convince their Western counterparts, the stabilization of Syria serves the global community’s security interests — and that is, at least for now, only a realistic possibility if Assad remains in power.

As experts such as John Calabrese have observed, China’s security and economic interests in Syria are closely linked. A spokesperson for Beijing’s Foreign Ministry said at the end of 2017:

“We support regional countries in forming synergy, consolidating the momentum of anti-terrorism, and striving to restore regional stability and order. We support countries in the region in exploring a development path suited to their national conditions and are ready to share governance experience and jointly build the Belt and Road and promote peace and stability through common development.”

For China’s BRI ambitions, Syria and Lebanon represent a route to the Mediterranean that is an alternative to the Suez Canal. Through large investments in ports in the eastern Mediterranean, the Chinese are seeking to revive historic Eurasian trade corridors that connect China to Europe, Africa, and elsewhere. Without question, the incorporation of the port city of Tartus and Damascus into the BRI would strengthen China’s economic position in the Levant.

Livid at Western governments that armed the Syrian opposition and now impose heavy economic sanctions and restrictions, Assad has spent years seeking to attract Chinese investment in the country’s reconstruction and redevelopment. In terms of Syria’s rebuilding, Beijing has some skin in the game. In 2017, China invested $2 billion in an industrial park in Syria. Officials in Beijing know that Assad will likely favor Russia, Iran, and China in reconstruction projects, and that working with governments of Assad-allied (or at least Assad-friendly) countries is more desirable for Damascus than bringing in GCC member states that supported the opposition during the Syrian civil war. China knows that it does not face real competition from the West when it comes to rebuilding Syria, as Assad has affirmed that the U.S. and Europe will not be involved in the process. Already, Huawei, a Chinese multinational technology company, has pledged to redevelop Syria’s nationwide telecoms network.

In a December 2019 interview, Assad said that the Chinese are assisting with reconstruction and humanitarian aid (including water, electricity, and the like). He also expressed hope that Chinese firms “can start looking and studying the Syrian market, which is improving quickly and constantly in terms of security. It is essential that we start discussing investment opportunities, because it is well-known that rebuilding countries destroyed partially or totally by war is very profitable and has high returns on investment.” Assad claimed that officials in Damascus are in talks with Chinese companies about figuring out ways to evade sanctions and improve access to markets in Syria. He also explained that “support from China and other friendly countries in Syria’s reconstruction is as important as the military efforts to restoring stability in Syria and striking and fighting terrorism.”

A key question now is how great of a risk China is willing to accept in Syria. With the remnants of ISIS still present and significant parts of Idlib still under the control of Turkish-sponsored anti-Assad groups, violence and instability continue to plague Syria. Depending on how the war-torn country moves ahead in 2020, China may be cautious about investing more resources into Syria if the security conditions would make such a move too risky.

However, it is safe to bet that China will continue efforts to deepen its partnership with Syria, not only to remain a key player in the country’s reconstruction but also to invest in good relations with Damascus for geopolitical purposes. China and Russia are rising powers in the Arab world and both are capitalizing on Washington’s strategic blunders and filling vacuums in the volatile region. For Beijing, the growth of its partnership with Damascus is in no small part related to Chinese ambitions of countering American hegemony in the Middle East and asserting its influence in West Asia while working to make China the center of global trade in the 21st century.

Looking ahead, there is a high probability that China and the West’s divergent positions on the Syrian conflict and questions regarding Assad’s (il)legitimacy will make Syria — in addition to other files ranging from Hong Kong and human rights to trade and technology — more of a hot-button issue in Sino-Western relations against the backdrop of a strengthening Beijing-Damascus partnership.

Giorgio Cafiero is the CEO and founder of Gulf State Analytics, a geopolitical risk consultancy based in Washington, DC. His research interests include geopolitical and security trends in the Arabian Peninsula and the broader Middle East. The views expressed in this article are his own.

Photo by Yao Dawei/Xinhua via Getty