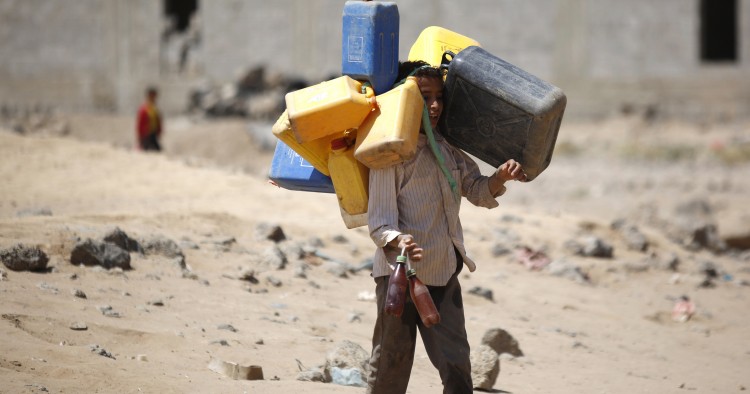 The International Panel on Climate Change (IPCC) projects that the Middle East and North Africa (MENA) will be one of the world’s regions hit hardest by climate change in the 21st century, particularly due to increased heat and aridity. In face of these challenges, interventions in domestic agricultural sectors have the potential to offset many negative impacts on the region.

MENA is the world’s most water-scarce region. While about five percent of the world’s population lives in MENA, the region only possesses about one percent of the world’s total renewable freshwater resources (T.R.W.R.). In 2011, the average per capita share of T.R.W.R. in the region was 819.8 cubic meters. This number indicates a 75 percent reduction of freshwater availability since the 1950s and is expected to fall by more than 40 percent by 2030.

Almost all the region’s countries are “water-stressed”—per capita water availability has fallen below the threshold of 1000 cubic meters annually. Of the world’s ten countries that are projected to suffer from the highest water stress by 2040, seven are in the MENA region—Bahrain, Kuwait, Qatar, United Arab Emirates, Palestine, Saudi Arabia and Oman. Thirteen regional countries are already considered “water-scarce,” where the per capita share of T.R.W.R. is less than 500 cubic meters, namely Yemen, Jordan, Algeria, Libya, Tunisia, Djibouti, as well as all the countries listed above.

Food security is also a major concern, to varying extents, for MENA countries. Arab countries depend on imports for 30-35 percent of their food supply. In 2011, before Arab uprisings caused severe disruption in the economies of, or in extreme cases the near-total economic and social collapse of, a number of countries, MENA cereal imports were expected to rise another 55 percent by 2030.

Several key negative implications further complicate the region’s high food import dependency. First, cereals constitute a major component in the diets of MENA populations, and cereal import dependency is well over 50 percent—by far the highest globally. Second, although we lack up-to-date poverty rate figures on all MENA countries, the fact that cereals comprise a major portion of the population’s diet is a strong indication of significant income poverty. Hardship is further amplified by volatility in international trade prices of grains and other essential foodstuff. Moreover, internal trade barriers in individual countries make it difficult for the poor to access food supplies. The greater a society’s reliance on basic food imports, the more the poor will be at risk of food insecurity whenever there are disruptions in trade.

Third, though MENA population growth rates have been slowing, they remain high enough to cause severe regional water stress. Particularly when compounded with an increase in economic development, the rise in water demand will likely lead to deeper levels of water stress (see figure), and also to parallel increases in food demand. 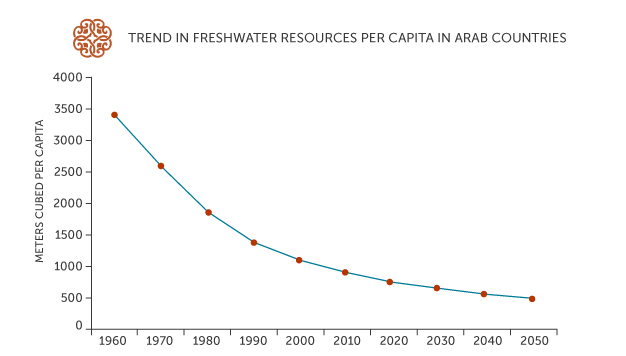 Lastly, while all this goes on, the physical impacts of climate change—increased heat stress, evapotranspiration rates, and aridity—are projected to hit the MENA region particularly hard.

Water scarcity is not merely a natural phenomenon. It is a relative condition for which natural causes as well as human factors are responsible. In the MENA region, characterized to a large extent by an arid/semi-arid climate, human water use patterns can interact with climatic conditions in ways that aggravate this natural water scarcity. In turn, water use patterns are integral to the question of regional food security; they are a powerful determinant of domestic food supply production levels. As a result of problematic regional water use patterns, food import levels increase and so too does the region’s exposure to fluctuating international agricultural and food markets. By triggering an increase in import dependency, water use patterns deepen regional vulnerability to food insecurity risk arising from unstable, unpredictable, and volatile conditions in these markets. Moreover, a growing structural imbalance between global food supply and demand will exacerbate this issue over the long-term.

Despite these challenges, water use patterns could have an alternative, favorable effect on food security. This scenario could be achieved with improvements in the balance between natural freshwater scarcity and the population’s demand for this water. In short, this would entail reducing consumption pressures on the available supply. For example, the average irrigation efficiency in MENA is only about 51 percent. It is estimated that raising this rate to 70 percent would save 50 billion cubic meters of the region’s water annually, and allow it to produce an additional 30 million tons of cereals—45 percent of its cereal imports in 2011.

This kind of change in water use patterns that boosts domestic food production would also strengthen the resilience of agricultural livelihoods and raise incomes, improving food security and reducing trade-related food insecurity risk.

While water scarcity is forecasted to increase with climate change—and, consequently, food security will also deteriorate in certain areas of the region—these projections follow from business-as-usual scenarios. The extent of the projected deterioration in per capita water availability is not yet entirely fait accompli; it would only be so if adaptive measures are much delayed. Government policies could encourage adaptation measures in agriculture to alleviate mounting pressures on freshwater resources and at least arrest the rate of increase in water scarcity. There is no one-size-fits-all policy prescription to achieve this, leaving room for flexible, innovative approaches in consideration of the socioeconomic priorities and constraints in each country.