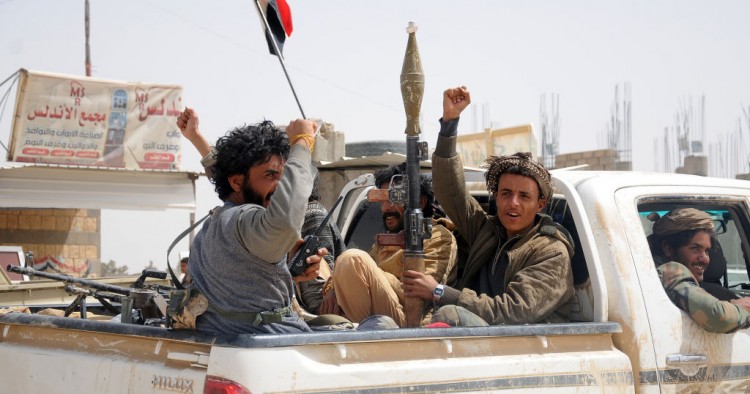 Despite the Houthis’ rejection of the Saudi-led coalition’s two-week unilateral cease-fire, on April 24 the coalition’s Joint Forces Command announced an extension throughout the holy month of Ramadan. The coalition had hoped that the Houthis would show a minimum of goodwill to revive the political process, following their acceptance of U.N. Secretary-General António Guterres’ call for a cease-fire in late March. Notwithstanding Houthi inflexibility, however, the coalition’s extension of the cease-fire is an attempt to reaffirm its commitment to non-military action and show appreciation for Guterres’ efforts. It is also aimed at easing difficulties during Ramadan and keeping the ball in the Houthis’ court for another month given the global COVID-19 crisis.

The Houthi rejection likely stems from the fact that structural shifts that have occurred since 2015 have worked in the group’s favor. These include the increasing international pressure on the coalition and Saudi Arabia’s growing war fatigue, as well as, more recently, the evolving consequences of the COVID-19 pandemic — which has prompted many countries to look inward — and an unfolding economic crisis that is becoming a priority for countries across the Gulf region.

The Houthis, therefore, are upping their demands and attempting to negotiate better terms to push the coalition to play by their rules. Shortly after the coalition declared its unilateral cease-fire on April 8, the insurgency announced a counterproposal — before it denounced the cease-fire in the following days — largely because it believes it might be able to secure greater concessions from Saudi Arabia, and by extension, the Yemeni government the kingdom backs. Their vision to end the war — a maximalist list of demands that Elana DeLozier, a research fellow at the Washington Institute for Near East Policy, accurately described as a “wish list” put forward by the Houthis “emboldened … by recent developments” — is a case in point.

In contrast to their earlier political rhetoric in response to Guterres’ call for a cease-fire, which was aimed at gaining temporary international attention and support, the Houthis conditioned their cease-fire engagement on an end to the blockade of Yemen and the coalition’s departure from the country — two of their recurring demands. However, if these conditions were met without a peace agreement in place, it would reduce the pressure on the Houthis and facilitate their access to foreign military and logistical supplies, paving the way for them to ramp up their attacks. The demands are made to enhance the Houthis’ bargaining chips, but most importantly, to politically humiliate the coalition as it seeks a way out.

A few days into the cease-fire, the Houthis’ chief negotiator, Mohammed Abdul Salam, dubbed the unilateral move a “deception,” and on April 16, he condemned the coalition for resuming hostilities by allegedly carrying out more than 250 airstrikes, calling it a “maneuvering” tactic. The Houthis have tried to downplay the fact that the coalition’s renewed airstrikes were a reaction to their own intensified attacks in the governorates of Hodeida, Jawf, Marib, and Bayda on April 9, which disregarded Guterres’ call for a cease-fire and the coalition’s initiative.

The Yemen Data Project, which recorded 164 individual airstrikes during the cease-fire, noted that the majority of these were conducted in two districts — Khabb Wa al-Sha'af in Jawf and Majzar in Marib — further reinforcing this narrative. The Houthis want the kingdom to suspend its airstrikes so they can deploy more military reinforcements and further concentrate their attacks along several frontlines. In other words, the Houthis have pinned their hopes on the coalition abiding by its announcement that it would isolate government-aligned forces, so that they can reap the benefits of rejecting the cease-fire and make territorial and resource gains.

For now, the Houthis continue their attempts to take over resource-rich Marib, following fierce tribal and governmental resistance backed by Saudi airstrikes. Most recently, a member of the Houthi political office, Mohammed al-Bukaiti, said there’s no cease-fire in place “that Saudi Arabia could extend,” arguing that the coalition’s objective was to “preemptively cover the expected defeat in Marib.” Coupled with the military escalation on the ground and repeated rejection of the cease-fire, al-Bukaiti’s statement echoes the military campaigns the Houthis are carrying out in places like Sirwah, and is aimed at further concessions, either in the scope of Saudi-Houthi or intra-Yemeni peace talks.

Against this backdrop, the coalition’s airstrikes were instrumental in restraining Houthi military advances. It’s also worth noting that the cease-fire announcement slowed down the government-aligned forces’ efforts to recapture al-Hazm, the capital city of Jawf. It broke their momentum, but hasn’t changed their goal of pushing the Houthis back, especially given the considerable financial and military support they’ve received from the coalition to secure Marib, according to soldiers and tribesmen on the battlefield.

Cease-fire should be part of a broader process

The coalition’s decision to announce a two-week cease-fire in the run-up to Ramadan was driven by timing and systemic factors, according to former U.S. Ambassador to Yemen Gerald Feierstein. From the outset, the coalition publicly indicated the possibility of an extension, should the Houthis choose to symbolically reciprocate the cease-fire. Because the Houthis understood the coalition’s next moves and key drivers, they ignored the offer and instead put their hardline demands on the table as conditions for reciprocating, contrary to several previous cease-fires.

The cessation of hostilities hasn’t materialized, nor will it likely in the near future, as the Houthis’ actions and intentions make clear — a fact underscored by the recent declaration of self-administration by the UAE-backed Southern Transitional Council (STC). Now that the coalition has extended the cease-fire in spite of the Houthis’ rejection, and received international endorsement, the ball is once again in the Houthis’ court and they have yet another chance to make a goodwill gesture. This should serve as a reminder to those working for peace that changing the current balance of power either in favor of or against the government is a critical precondition for a serious resumption of the peace process. This unilateral cease-fire episode should also be an object lesson for external actors in understanding how and when a cease-fire should occur in Yemen. It raises questions about the use of cease-fires in de-escalation and conflict-resolution efforts — whether they should come before credible peace talks, during negotiations as a result of tangible progress to build confidence, or after the conclusion of a peace agreement. The Houthis’ current rejection of the cease-fire and the STC’s escalation demonstrate that peace talks shouldn’t be contingent upon the cessation of violence. Instead, the two should proceed hand in hand.