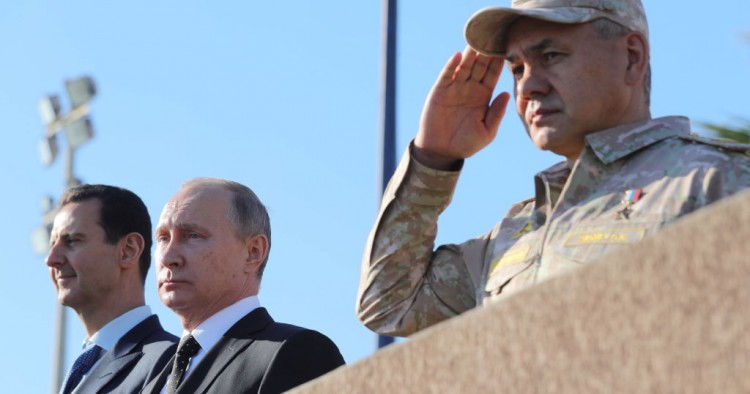 As the Assad regime claws territory back across Syria from rebel and Islamist forces, it has had to mortgage its monopoly over the use of force to paramilitary groups to overcome its openly acknowledged manpower shortages. It has occasionally called on these militias to augment the army’s fighting capacity, but more often than not it has directed them to protect, and in some cases even police, areas away from the frontlines. This has been particularly true in Tartous and Latakia. In recent months, the loyalist militias tasked with providing security in these coastal areas, some connected directly to the president’s family, have challenged the regime’s primacy, prompting external intervention. The growing power of these groups and the response of Bashar al-Assad’s foreign backers illustrates how local skirmishes over smuggling routes can have much broader geopolitical implications as Russia gains ground at the expense of both the regime and Iran.

Northern Latakia has long been an important junction in smuggling networks running from Turkey into Syria. When Hafez al-Assad came to power in the 1960s, groups that had been previously marginalized were now able to use their familial and clan connections to take advantage of and expand the smuggling networks. Today, these smugglers and other paramilitary groups, such as the National Defense Forces (NDF) and Coastal Shield Brigade, have been tasked with guarding the regime’s heartland.

Until the past few years, the existential threat from rebel and Islamist fighters deterred pro-regime groups from openly defying the government. While the regime has permitted loyalist militia groups to profit off of smuggling into rebel-held areas and even from extorting local populations, it has consistently drawn a line against allowing them to use their weapons on the regime. Until recently it has been able to act swiftly and decisively against wayward groups, such as when it dismantled the pro-regime Desert Hawks militia in 2017 after the cousin of group’s head violently confronted the president’s motorcade in Qardaha. While it was considered an “elite” unit and deployed on special assignments, such an armed affront to the regime — and indeed the president himself — was beyond the pale and the group was disbanded and its leader, Ayman Jaber, sidelined.

Fast forward to the past year and the balance of power seems to have shifted: There has been a marked increase in crimes reported in Qardaha and Latakia perpetrated by loyalist militias. Car theft and kidnapping for ransom both appear to be on the rise. In March, regime and Russian-backed Republican Guard forces attempted to arrest Talal al-Assad, cousin of the president and the leader of the local NDF. The reasons for his arrest remain murky but it appears he refused a direct order to send one of his subordinates to Damascus for investigation after he was caught smuggling drugs in the area. When confronted with Republican Guard forces, Talal escaped to Qardaha, where he expelled all other regime civilian and military personnel and proceeded to fire rockets down on Latakia city as a warning. To date, no loyalist militia in Syria has acted so brazenly against the regime — and remained standing.

While Talal al-Assad and Ayman Jaber were both smugglers-cum-militia leaders, the former is a member of the ruling clan and the latter is not. Although members of the Assad family have always been untouchable to a degree, if Bashar is unable to rein in a rogue militia leader, what kind of message does that send to those looking to him to restore stability? Moreover, such open defiance could be seen by rival elites, some possibly within the Assad clan, as an opportunity to push Bashar aside. A continued breakdown in his personal authority could mean that he wins the battle against the rebels but ultimately loses the war.

Kicking a friend while he’s down

As Bashar tries to battle rebels and internal opponents alike, he is also struggling to balance the interests and objectives of his foreign backers, Iran and Russia, both of which have been instrumental in defending the regime. Their support, however, has come at a price. The regime has been forced to make economic concessions such as oil and gas exploration rights, preferential trade agreements in sectors such as agriculture, and contracts for reconstruction of war-ravaged areas. In addition, Iran and Russia have been seeking to expand their military footprints in Syria by building bases and fostering proxy forces. Iran has sought to create and support paramilitary forces in Syria, both domestic and foreign, to aid the regime and provide leverage for Tehran after the war concludes. Russia has provided air support on the battlefront and worked to professionalize the Syrian armed forces and (re)integrate paramilitary units into a formal military structure. The fight over the spoils of war has brought Russia and Iran into greater competition in Syria, with increasing direct confrontations — particularly in eastern Deir-ez-Zor Province — between their proxy forces.

As both countries seek influence in post-conflict Syria, the growing insecurity in coastal areas presents an opportunity to exploit. Iran may look to empower the president’s brother, Maher Assad, who leads the army’s 4th Division and is known to have pro-Iranian sympathies. So far, Bashar has proven to be a useful and pliable ally for Iran, but doubtless they would prefer to have an alternative should he prove unreliable. Encouraging, or at least not actively discouraging, insecurity in Latakia and Tartous may be a way to empower Maher at Bashar’s expense. While Iran may not have been aiming for a palace coup, encouraging paramilitaries to act out could have been a means of applying pressure on Bashar as he wavered between Iran and Russia.

If Iran’s intention was to draw Bashar closer, then the rug was pulled out from under it when Russian military police began to deploy across Tartous and Latakia to quell the rising crime and violence. Although Russia has positioned military police in Syria previously, this is the first time it has done so in an area not previously held by rebel forces. Often, Russian military police were seen as a more neutral security guarantor by civilians and former rebel fighters than regime or Iranian regular or proxy forces. The deployment of Russian military police across Tartous and Latakia demonstrates both the inability of the Assad regime to effectively police its own territory and the degree to which Russia will go to take over a basic function of the Syrian state. By being allowed to deploy Russian forces directly in the regime’s heartland, President Vladimir Putin has further reinforced the view that only Russia, and not Iran, can provide true security and stability.

However, Russia’s move is certainly not wholly altruistic, as it has considerable investment in both the Hmeimem air base in Latakia Province — where it headquarters its forces for the whole country and from which it directs air campaigns — and its Tartous naval base. If loyalist militias, some of which are more partial to Iran than Russia, wrestle more power in these coastal areas, they could conceivable threaten two of the greatest geopolitical prizes Russia has won through its intervention in Syria. At the Hmeimem air base, Russia has deployed its advanced S-400 anti-aircraft missile system, which has a range sufficient to deny any NATO or otherwise unfriendly aircraft in the whole of the northeastern Mediterranean. In addition, Russia has signaled its intention to expand the Tartous naval base, which it leases under a long-term deal with the Syrian government and is its only warm water port. In short, Russia sees the security of these two military bases as a top priority and is willing to put its own forces on the line to safeguard them.

The increasing lawlessness of loyalist militias in key areas certainly spells trouble for the regime. Unable or unwilling to act against Talal and his gang, Bashar called on Russia for help. Seizing the opportunity, Moscow deployed its military police to restore security and track down Talal, rather than letting the instability fester or orchestrating Bashar’s removal. The move both undermines Iran and reinforces Russia’s role as the regime’s protector while further indebting Bashar, from whom it can continue to extract economic and potentially military concessions.

For now, the scales are tipping ever so slightly toward Russia in the struggle for the soul and spoils of war in regime-held areas. If Russia can rehabilitate Syria’s broken military, this could facilitate the latter’s reacceptance into the world order and access to large-scale reconstruction funding, a key goal for both Russia and the regime. In addition, Russia’s support for the Assad regime demonstrates its security and diplomatic bonafides to other potential allies in the Middle East and elsewhere.

Nick Grinstead is an independent conflict and fragility consultant. The views expressed in this article are his own.