Collection Spotlight:A Peace to End All Peace: The Fall of the Ottoman Empire and the Making of the Modern Middle East 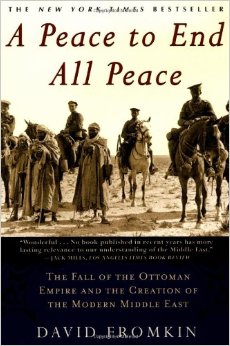 A Peace to End All Peace: The Fall of the Ottoman Empire and the Making of the Modern Middle East

As the world marks the centennial of the war to end all wars, David Fromkin’s A Peace to End All Peace: The Fall of the Ottoman Empire and the Making of the Modern Middle East, is a welcome addition to the literature, chronicling the chaos and violent conflicts in the Middle East during World War I. While the academic world might be familiar with Gallipoli and Lawrence of Arabia, Fromkin illuminates a much larger and more complicated picture that includes a few triumphs as well as many tragic blunders. There were many individuals whose actions helped create the modern Middle East, and a Peace to End All Peace shows how it was their interactions helped lay the groundwork for a conflict that continues to define the region today.

Most of the scholarship on World War I is concerned with either the western front or the Bolshevik Revolution in Russia. However, Fromkin’s work shows that Ottoman Empire was an area of great concern for both the Allied and the Central Powers, and played a key part in the conflict. Britain and France hoped that a quick defeat of the Ottoman military would allow them to strike Germany and Austria-Hungary from the south, thus ending the months of bloody stalemate on the western front. Russia, meanwhile, sought to reopen the Dardanelles and conquer the Turkish capital of Constantinople. Due to a mixture of incompetence and misinformation on the part of the Allies, the Turks and their German allies were able to thwart these early attempts.

Indeed, it is Fromkin’s description how the “Sick Man of Europe” stood up to these challenges that does the most to challenge the conventional wisdom regarding the conflict. In his account, the Ottoman Empire on the eve of the conflict is one both weighed down by its own inefficiency, yet also determined to reform and return to its former glory. Mindful of the imperialist threat posed by Britain and France, the Young Turks who had seized power in the empire, were drawn to Germany as an ally. How the Turkish government convinced Germany to form an alliance is one of the highlights of the book. Fromkin skillfully debunks the claim that the Turks were simply pawns of the Central Powers. At the same time, he shows how the Turkish government also alienated several important Arab leaders, thereby pushing them towards the Allies.

Fromkin also describes how both the Allies and the Central Powers were beset by numerous internal disagreements. The author notes that many in the British government felt that the Young Turks were actually ruled by a Jewish Freemason who was sympathetic to the German cause. By contrast, the prime minister of Great Britain, David Lloyd George, was an ardent Zionist who believed a Jewish state in Palestine was essential to British security. His goal of aggrandizing the British Empire put him at odds with his French and Russia allies, who wanted a share of the former Ottoman Empire, and with Woodrow Wilson, who came into the war opposed to further imperialism. The Germans and the Ottomans also had several disputes, particularly regarding Ottoman treatment of minorities. All of this created an environment where the two sides argued with themselves just as much as they cooperated to fight their respective enemies.

A Peace to End All Peace is an invaluable resource for any scholar seeking to understand the World War I and its effects on the Middle East. Fromkin looks at how international, intranational, and intergroup conflicts all played out to ultimately tear apart the Ottoman Empire, and create the states in the Middle East. It also shows how the war in the cradle of civilization affected the rest of the world. He expertly documents how a Bolshevik exile living in Constantinople paved the way for the agreement between Lenin and the German Empire that enabled the October Revolution. While he perhaps overstates by comparing the fall of the Romanov dynasty to the replacement of the Asquith Government in Britain, his explanation for how the conflict in the Middle East brought about the end of both is well-researched and persuasively stated. A Peace to End All Peace shows how Westerners, Ottomans, and Arabs plotted, schemed, and blundered through a war that helped create the Middle East we know today.

The Arabs and Zionism Before World War I, by Neville J. Mandell, 1976