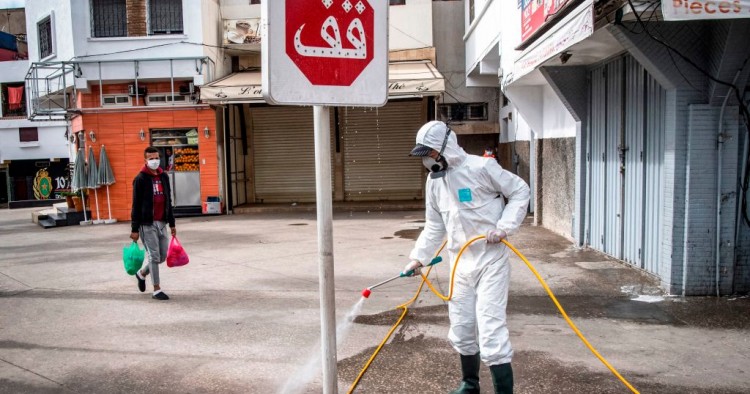 Governments and citizens throughout North Africa are gearing up for a huge increase in coronavirus infections expected in late March, April, and May. Just next door, Italy and Spain are two of the five worst afflicted countries on the planet — along with the U.S., China, and possibly Iran — with more than 144,000 confirmed cases between them, as of March 27, and over 13,000 deaths. By contrast, Morocco, Algeria, Tunisia, and Libya have only 912 cases and 42 deaths. However, the countries are keenly aware that North Africa has only scratched the surface in terms of surveillance (testing) and preparation (numbers of beds, staff training, personal protection gear, and ventilators). Societal shutdowns and social distancing are already widely practiced across the region, even in war-torn Libya.

As noted by Jason Pack for MEI, panic buying has continued in Libya, and thousands of tons of foreign arms and hundreds of soldiers are flowing in. Borders remain officially closed. Over 95 percent of oil exports are still blockaded by General Khalifa Hifter’s armed forces, which have been laying siege to the capital since April. Libya has only one confirmed case of the virus, announced Wednesday, but communities nationwide are on lockdown, because symptoms are widespread and the health care system unprepared. The UN — including the World Health Organization (WHO) and UNICEF — along with dozens of other international organizations and countries issued statements calling for an immediate humanitarian cease-fire and warning that a Libyan outbreak could have catastrophic consequences. On Saturday the State Department issued an unusual plea to Hifter to “suspend military operations, reject toxic foreign interference, and enable health authorities to fight this global pandemic.” Crisis Group called on the UN to engage in virtual peacemaking through “secure electronic communications.” Of particular concern were over 700,000 vulnerable migrants and refugees and 400,000 internally displaced persons inside Libya. International assistance began to pivot toward pandemic preparedness and response; the WHO started assisting with actual testing just this week. The besieged UN-backed government in Tripoli pledged $358 million to respond to the disease.

But things seem to be going from bad to worse. Crisis Group reported that due to domestic struggles, European leaders had “little time to devote” to working on the Libyan cease-fire or peace process. On the ground, the health system is in shambles, in large part due to the lack of foreign medics, nearly all of whom left the country as a result of the civil war, leaving dangerous gaps in coverage. The International Rescue Committee issued its own warning, stating that nearly 20 percent of Libyan hospitals and primary care facilities were completely shut down by the civil war and that there were 62 confirmed attacks on health facilities and health personnel since General Hifter launched his attack on Tripoli one year ago. The war on civilians raged on this week, with Hifter once again bombing a prison in southern Tripoli, and indiscriminately shelling civilian areas with imprecise Grad rockets, killing seven women and children and two migrant workers and injuring several dozen more. Meanwhile, Hifter’s forces were increasingly socially distancing themselves from over 200 newly arrived Syrian mercenaries sent by Bashar al-Assad and the 2000-plus Russian troops, advisers, and mercenaries still arriving in mid-March. In some cases, Libyans were abandoning the front lines to foreign mercenaries from those two countries and to larger numbers from Sudan, Chad, and Eritrea. The war was escalating as of March 27, with hot battles on several fronts and fewer and fewer Libyans involved in attacking Tripoli.

Algeria initially announced that it had caught the bug on Feb. 25, from an Algerian living in France, which is also suffering and has a higher death toll than the U.S. The first 12 cases were all in the same family, but on March 7 another case was announced, carried in by an Algerian living in Spain. Algeria had been identified by the WHO as being at unusually high risk given its extensive links to China, but both countries appear to have adequately controlled those vectors. By March 27, community spread of the virus originally brought from Europe was very serious, with 409 confirmed cases and 25 deaths, with only 29 people recovered. While Blida, southwest of Algiers, has nearly half of the cases, the health minister confirmed that Algerians had country-wide transmission and must “prepare for the worst.” Full curfews have been extended to ten provinces, with more to follow. As reported by Ambassador Robert Ford for MEI, mosques and schools remain closed, prices are soaring, and hydrocarbon prices are plummeting — threatening the economy. Algerians have curtailed their 13-month-old protests challenging government corruption, and today Amnesty International called for a release of all prisoners of conscience. Algeria has announced measures to increase food importation, stop price gouging, and introduce paid leave for mothers. But the country is facing the very real possibility that its health care system will be overwhelmed, which raises the question of whether sovereigntist Algerian leaders will reach out early enough for international assistance, ahead of the tsunami of demand. Algeria does not have enough hospital beds, protective equipment, or ventilators, with only 1.9 hospital beds per thousand, as reported by Intissar Fakir for the Wilson Center.

Morocco is even worse off by that metric, with only 1.1 bed per thousand, well below the global average of 2.7. By March 27, Morocco had reached 275 cases and 11 deaths, with only 2 recoveries and a government minister still self-quarantining. Nearly all of its cases are in the four largest cities, linked to multiple vectors introducing the disease from Italy, France, Spain, Austria, Egypt, and the U.S. Morocco identified its first case only on March 2. When it abruptly closed its borders in mid-March, Morocco not only shut down its tourism industry, but it also stranded thousands of foreign tourists. While France evacuated nearly 20,000 nationals, only 1,200 Americans have been airlifted by chartered flights via London, and hundreds and perhaps “thousands” more, according to numerous press reports, remained stuck in Morocco, reporting feeling “abandoned” by their government. Spain and the U.S. announced assistance programs late in the week to help Morocco. The U.S. initially offered only $670,000, with other re-programmed funds sure to follow. Morocco continued to announce economic relief and stimulus measures, cutting import duties, issuing a hiring freeze but hiring in essential sectors, and launching a program called “Damane Oxygène” to keep businesses from bankruptcy. Meanwhile, Morocco accused Algeria of expelling Moroccan workers due to COVID-19 and announced new burial rites for victims of the virus, as some Moroccan families began to bury their loved ones without funerals.

While lacking the considerably greater resources of Libya and Algeria and the top-down surge capacity of Morocco, Tunisia has arguably the best existing public health infrastructure. At present, however, Tunisia is no less likely to be hit by a similar demand crush, with the disease spread across the country. As of March 27, Tunisia had 227 cases, 6 deaths, and only 2 recoveries. Over 4,000 Tunisians are under some kind of quarantine, and private health clinics continue their conversion to public health facilities, giving Tunisia more than twice as many hospital beds per thousand as Morocco. Tunisians complained about serious shortages in medicine, and the health minister announced this week that Tunisia had enough chloroquine to treat 20,000 patients, despite no medical research proving that chloroquine actually works. The open political environment continued to produce criticism in all directions, countered by calls for unity from most political leaders. The prime minister announced the creation of a new national agency to address the crisis, while Parliament focused on food and medicine distribution and exhorted skeptical Tunisians to follow government instructions and stay home, with the speaker adding, “The war on coronavirus will be a test for us all.”

William Lawrence teaches political science and international affairs at American University’s School of International Service. He has served as a senior diplomat, analyst, and international programs director. The views expressed in this article are his own.