The Contemporary Islamic State of Indonesia: Threats and Challenges 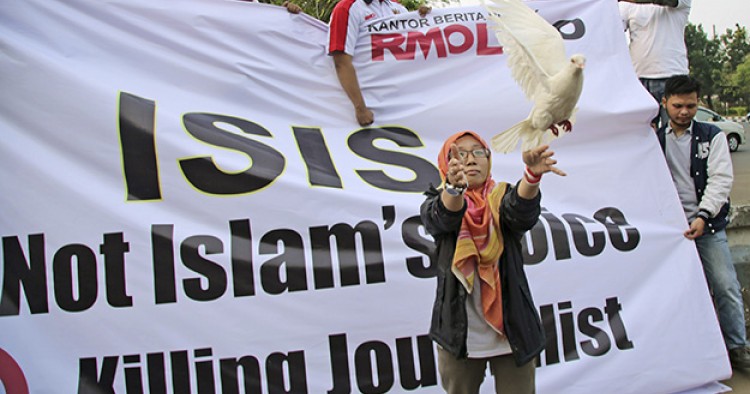 The Islamic State (ISIS) currently poses a serious security threat to Indonesia. The group has already recruited hundreds of young fighters and jihadi volunteers from various parts of the country. Its battlefield successes and its call for the establishment of a caliphate in Indonesia have resonated with, mobilized, and united jihadi groups that had previously been fractured and weakened. This essay examines past efforts to establish an Islamic state in Indonesia and discusses how veterans of past conflicts―from the war in Afghanistan in the 1980s to the religious conflicts in Poso and Maluku―seeded Indonesia’s jihadi movement, spawning new networks and organizations. The current global jihad battlefield in Syria and Iraq is the training ground for the next generation of jihadi returnees to Indonesia and the Southeast Asian region.

The Idea of Darul Islam (DI): Roots and Resilience

The idea of establishing Darul Islam (DI), an Islamic state in Indonesia, has deep historical roots. On August 7, 1949, Sekarmadji Maridjan Kartosuwirjo[1] proclaimed himself the imam of Negara Islam Indonesia (NII), or the Islamic State of Indonesia―a secessionist movement that opposed the ruling Sukarno government.[2] A year earlier, the NII had drafted its political structure, which specified that “Islam was the foundation and legal basis of the Islamic State of Indonesia, the Koran and Tradition constituting the highest authorities.”[3] Four years later, Daud Beureueh, the ruler of Aceh, joined with NII. He assumed the title of civil and military governor of NII in Aceh and declared the entire region of Aceh to be part of NII’s Islamic state.[4]

NII emerged during the Indonesian National Revolution, in the midst of armed struggle between the Dutch—who were attempting to re-establish their colony in Southeast Asia—and Indonesian Republicans seeking to secure independence. Kartosuwirjo’s efforts to establish an Islamic state in Indonesia were opposed both by Republican leaders and by the ulama—especially the Nahdlatul Ulama, a particularly influential association of religious leaders. This dispute immediately turned violent. In West Java, guerrilla forces supporting the NII attacked Republicans. They also attacked Islamic schools and killed local religious leaders who opposed them or refused to join their movement. [5] My grandfather, Kiai Entoh―burned alive in his pesantren (Islamic school) in Nangkaleah, Tasikmalaya―was among those targeted. This practice of burning houses, schools, and religious scholars subsequently led many Sundanese[6] to refer to Darul Islam (DI) as Duruk Imah, or “burning a house.”[7]

Although Indonesian military forces eventually destroyed Kartosuwirjo’s Darul Islam, the idea of creating an Islamic state survived. Abu Bakar Ba‘asyir, who joined NII in the 1970s, established Al Mukmin Islamic School in Sukoharjo, Central Java. In 1993, a group of graduates from his school founded Jemaah Islamiyah (JI), the organization responsible for the Bali bombings nine years later that killed over 200 people, most of them Australians.

Some of the key leaders and foot soldiers who eventually filled JI’s ranks were veterans of the war in Afghanistan against Soviet forces. For example, after being recruited by NII to fight in Afghanistan, Nasir Abas went on to become a senior operational leader for JI. Abas and other Southeast Asian fighters joined the Afghanistan Mujahidin Military Academy at Camp Saddah on the Afghanistan-Pakistan border, which was operated by Tanzim Ittihad-e-Islamy Afghanistan under the leadership of Abdul Rasul Sayyaf (Abu Sayyaf). After the war ended, these militants dispersed—returning to Indonesia, Malaysia, Singapore, the Philippines, and Thailand—but maintained the jihadi networks they had formed while abroad.[8]

These returning veterans successfully recruited Muslim students and scholars in Southeast Asia during the 1990s, highlighting the importance of containing the spread of jihadism and caliphate movements affiliated with the current conflicts in Syria and Iraq. According to Rodger Shanahan, few of the European foreign fighters in Syria have a clear desire to return to Europe, convinced that either they will die as martyrs or else live in the caliphate that they are seeking to establish.[9] However, some foreign fighters will undoubtedly decide to return home, and it is likely that developing countries—given the limited capacities of their security forces—will face an especially difficult challenge in coping with these returning jihadis.

The influence of ISIS grew significantly in Indonesia when the group’s leader, Abu Bakr al-Baghdadi, issued a “call to jihad.” On July 23, 2014, “Join the Ranks,” an eight-minute ISIS propaganda video targeting Indonesians, was released on YouTube.[10] According to Indonesian intelligence officials, the lone speaker on the video is thought to be Bahrumsyah, an Indonesian terrorist linked to Mujahidin Indonesian Timur (MIT). It is estimated that a few hundred fighters have traveled to Syria and Iraq from Southeast Asia, many of them from Indonesia.[11]

Some Indonesian jihadi leaders have declared allegiance to al-Baghdadi. Mochammad Achwan, the acting chairman of Jemaah Ansharut Tauhid (JAT), which splintered off from JI, stated that Abu Bakar Ba‘asyir, convicted for his involvement in Aceh terrorist camps and jailed in the maximum-security Nusa Kambangan prison, has instructed his followers to support their Muslim brothers by fighting with ISIS to defend its self-proclaimed caliphate.[12] However, Ba‘asyir’s solidarity with ISIS created friction within the JAT. Some members, including Ba‘asyir’s two sons, repudiated his call and subsequently established a new organization called JAS (Jemaah Ansharus Syariah).[13] Despite this rift, Ba‘asyir’s call to support ISIS has won adherents, including smaller, independent jihadi groups in Java, Sumatra, and the Sulawesi islands. Santoso―the commander of Mujahidin Indonesia Timur (MIT) and Indonesia’s most wanted jihadi―has also declared support for ISIS.[14] Santoso, it should be noted, successfully recruited local fighters to participate in a sectarian conflict in Poso that resulted in thousands of deaths.[15]

Independent jihadi splinter groups under the influence of Aman Abdurrahman have also declared support for al-Baghdadi. Blogging from prison, Aman has disseminated articles by al-Qa‘ida-affiliated scholars that are crucial sources of radicalization in Indonesia.[16] Aman’s followers discuss his writings in schools, mosques, and religious circles. Malaysian police, among others, claim that Aman’s teachings while in prison, along with those of Ba‘asyir, have inspired young men to travel to Syria to join ISIS.[17] Here, it is important to note that prisons serve as important channels of jihadi recruitment in Indonesia.[18]

However, a powerful counter-current to these disturbing developments has emerged. Leaders of Indonesia’s two largest Muslim organizations―Nahdlatul Ulama and Muhammadiyah―have publicly stated that ISIS’s teachings and conduct are antithetical to the basic principles of both Islam and Pancasila (the ideological foundation of the Indonesian state, which endorses no particular religion but emphasizes the general principles of monotheism, humanism, unity, democracy, and social justice).[19] In an interview with The Australian in Jakarta, outgoing President Susilo Bambang Yudhoyono insisted that “Indonesia is not an Islamic state. We respect all religions. Our state ideology is Pancasila.”[20]  Meanwhile, Muslim civil society organizations have undertaken efforts to develop teachings, seminars, and discussions that highlight ways of overcoming radicalism and terrorism in Indonesia. These efforts align with President Joko Widodo’s emphasis on strengthening the forces of moderation, such as Nahdlatul Ulama and Muhammadiyah.[21] Nasaruddin Umar, Deputy Minister of Religious Affairs, has also argued that in pursuit of its own political and military power, ISIS is misrepresenting basic Islamic values.[22]

The goal of establishing an Islamic state in Indonesia dates from as early as 1949, when NII launched its violent secessionist movement, murdering civilians and committing other atrocities. In the years that followed the destruction of the NII guerrilla army, Indonesia witnessed recurring spasms of extremist violence associated with this goal, often the work of militants who had gained experience by fighting in conflicts abroad or at home.

Today, the campaign to establish Darul Islam in Indonesia continues.  ISIS’s battlefield gains and worldwide “call to jihad” have energized and united various jihadi groups operating in different parts of the country. Hardened veterans of past conflicts, including jihadis currently detained on charges of terrorism, continue to play important roles in the radicalization and recruitment of young Indonesians. Encouragingly, this disturbing trend has been met by a rising tide of opposition from Indonesia’s largest Muslim organizations, leading voices within the country’s overwhelmingly moderate Muslim population, and Muslim civil society groups. This reaction should strengthen government policies aimed at overcoming radicalism and terrorism in Indonesia. Nevertheless, as the threat posed by ISIS is transnational in character, countering it will also require closer regional and international cooperation.

[1] C. Van Dijk, Rebellion under the Banner of Islam: The Darul Islam in Indonesia (The Hague: Martinus Nijhoff, 1981).

[4] M. Isa Sulaiman, “From Autonomy to Periphery: A Critical Evaluation of the Acehnese Nationalist Movement,” in Anthony Reid, Verandah of Violence: The Background to the Aceh Problem (Seattle: University of Washington Press, 2006), 130; and Nazaruddin Sjamsuddin, The Republican Revolt: A Study of the Acehnese Rebellion (Singapore: Institute of Southeast Asian Studies, 1985), 199.

[6] The Sundanese people, Indonesia’s second-largest ethnic group, are native to the western part of the island of Java.

[7] Personal conversation with my grandmother, R. Nyimas Kainah, the wife of Kiai Entoh, in Karawang. She frequently talked about her husband being burned by DI and can remember very clearly her husband’s death. She said: “Kiai Entoh was having discussions on some religious books with three ulama at the house of pesantren area. It was around early morning that DI attacked and burned the house, including my husband and three ulama.” She is now 95 years old living in Karawang.

[15] The conflict, which began around 1998, was resolved by the central government in 2001 through a peace accord between Muslims and Christians. However, violence continued until about 2007 (Dave McRae, A Few Poorly Organized Men: Interreligious Violence in Poso (Leiden: Brill, 2013), 7. For an online edition, see http://www.lowyinstitute.org/files/mcrae_a_few_poorly_organized_men.pdf. Regarding the impact of the religious conflict in Poso, Central Sulawesi, in which Santoso played a pivotal role, see Lorraine V. Aragon, “Reconsidering Displacement and Internally Displaced Persons from Poso,” in Eva-Lotta E. Hedman, ed., Conflict, Violence, and Displacement in Indonesia (Ithaca, NY: Cornell University Press, 2008).

[18] Regarding radicalization in Indonesian prisons, see Carl Ungerer, “Jihadists in Jail: Radicalisation and the Indonesian Prison Experience,” Special Report, Issue 40, Australian Strategic Policy Institute, May 2011, https://www.aspi.org.au/publications/special-report-issue-40-jihadists-in-jail-radicalisation-and-the-indonesian-prison-experience/SR40_jihadists_in_jail.pdf. Many new recruits joining Indonesian ISIS are new to jihad. Some are former criminals and drug dealers radicalized in prisons. Often, they do not completely understand the meaning of jihad, particularly its context in Syria and Iraq, where civil wars between Sunni and Shi‘a have occurred. See Brian Michael Jenkins, “The Dynamics of Syria’s Civil War,” Rand Corporation, 2014, http://www.rand.org/content/dam/rand/pubs/perspectives/PE100/PE115/RAND_PE115.pdf.