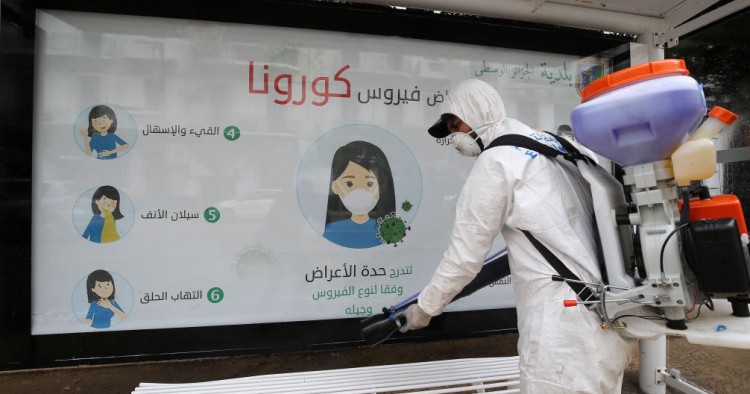 No part of the world will emerge unscathed from the fallout of the coronavirus pandemic of 2020. Just because China and Italy were the first to be severely hit, does not imply, that when all is said and done, that they will have sustained the brunt of the damage. In fact, there is ample historical precedent to suggest that more peripheral parts of the global economy tend to suffer more in times of unexpected downturns and bear the bulk of deaths in a pandemic.

Now might be an appropriate time to update the old adage, “When America sneezes, the world catches a cold.” The mid-21st century version might go, “When China coughs, Africa experiences state failure.”

We are living in a time where the international system is characterized by enduring disorder and a lack of global leadership; the virus will merely increase these pre-existing trends. Forecasting indirect chains of causation is extremely challenging in the best of times. This epoch combines peak unpredictability occasioned by the ongoing disorder with the herding effects of peak interconnectedness.

North Africa is a region dependent on global commodities prices, tourism, and political and monetary support from Europe and the Gulf. Here regime brittleness, youth unemployment, and Islamic radicalism all intersect. North Africa’s economies are poorly integrated with each other, yet migrants, jihadis, and guest workers fluidly transit the region.

As the effects of COVID-19 ripple outward, ever-wider from Wuhan, history tells us to expect a significant delay before less globalized regions feel the full force of the virus’s effects. The terrorist attacks of Sept. 11 and the financial crisis of the Great Recession of 2008-09 were gamechangers globally. Even though certain areas of the world or sectors of the economy did not appear to be immediately impacted by 9/11, they actually faced more profound disruptions later. The economies of North Africa were initially highly insulated from the stock market crashes and declines in trade volume engendered by the Great Recession of 2008-09. However, there is compelling research to suggest that in the Global South the Great Recession progressively exacerbated a growing bulge of youth unemployment, which when combined with crop failures and new technologies, fueled the Arab Spring movements of 2011.

How North African governments are responding

Coronavirus differs from a normal financial panic in that it forces governments to exert leadership, quarantine citizens, and manage a complex society-wide health care response while deciding how to allocate scarce resources without engendering social disruptions. There are early indications that the North African regimes are trying to learn from Iran’s failings and to get out in front of the pandemic. On the positive side of the ledger, Egyptian authorities are following the Centers for Disease Control and Prevention and World Health Organization guidelines by imposing curfews and closing non-essential businesses. Its famously entrepreneurial small business sector has created a range of phone counselling options for youths suffering from depression due to social isolation. Morocco and Tunisia are crowdfunding money to upgrade their health care systems. Even Libya’s notoriously weak Government of National Accord has announced measures to limit travel and increase awareness. On the negative side, each government has been guilty of underreporting case numbers and imposing preventative measures far too late.

So far though, with the wins seemingly outweighing the losses, the North African governments seem to be relishing this moment, gloating over Twitter about their relatively small number of confirmed cases. Nonetheless, the disease presents a double-edged sword for them. It may increase short-term stability, while eroding it in the medium term.

On the one hand, it implicitly forces citizens to rely on, and even in some instances defer to, their leaders in the face of the immediate crisis. This is particularly convenient for the Algerian “Pouvoir,” which has undergone a forced transition and more than a year of ongoing massive popular protests. Predictably, fear of coronavirus was the death knell for that source of unrest. Even in war-torn Libya, the virus is already reducing arms shipments and inflows of mercenaries. The two sides are relatively preoccupied by having to impose curfews on their populations and deflect persistent international calls for a humanitarian cease-fire. Notwithstanding, the conflict rages on with a new offensive on the ‘Ain Zara axis launched by the self-styled Libyan National Army on March 23. However, global concern with the pandemic over the coming months will make it quite difficult for patrons of either warring faction to deliver sufficient armaments and trainers to allow their clients to punch through and score a knockout blow anytime soon. The virus simply makes the protracted stalemate on the southern Tripoli frontlines even more likely to endure.

On the other hand, with the partial exception of newly democratic Tunisia, North Africa’s regimes are among the least prepared globally to mount a coherent response to the inevitable onslaught of the virus. These regimes have difficulty addressing relatively basic needs like electricity and schooling. They are bound to further inflame popular discontent with incompetent and corrupt responses to the pandemic. There are already accusations of widespread profiteering — with the Egyptian government in the crosshairs for price gouging vulnerable workers seeking to obtain tests for COVID-19. Moreover, the dramatic fall in oil prices will be potentially devasting in the medium term for Algeria and Libya — and likely Egypt too as it gradually affects investment in Eastern Mediterranean gas projects and transfer payments from the Gulf.

Hence, we are likely to see a short-term increase in stability in Algeria and Egypt (and maybe even in Libya) followed by a serious rise in popular discontent in the medium term when the pandemic ebbs, but government revenue and youth employment are left woefully diminished in its wake. If governments’ handling of coronavirus is viewed as particularly inept (as we have seen in Iran), early to mid-2021 could become a challenging time for North Africa. We could even see a wave of popular protests roughly coinciding with the 10-year anniversaries of the Arab Spring events.

In short, despite its late arrival, the stage is perfectly set for coronavirus to occasion dramatic upheavals in North Africa. Whether warlords in Libya, kleptocratic oligarchy in Algeria, or military dictatorship in Egypt, no one should expect these regimes to proactively embrace genuine reform under any circumstances. Leaders in each have had many bites at that apple, and consistently prioritized maintaining their personal power above the long-term welfare of their citizens. In the past, regional governments have had money, historical legitimacy, a respected military, and a fear of a radical jihadist opposition to secure popular acquiescence even in bad times. Such buffers are a thing of the past.

Money, legitimacy, the reputation of the armies, and charismatic leadership have all disappeared since the Arab Spring. If push comes to shove, these brittle regimes are unlikely to deftly de-escalate tensions. They may seek to provoke violence with domestic opponents to rationalize a crackdown on dissent and force foreign backers to come to their aid. Algeria or Egypt may intervene directly in Libya’s civil war to focus their publics’ attentions outward. Elites may split, resulting in coup attempts by those seeking systemic reform.

Looking to the Gulf

The most likely outcome is that the regimes will continue to do what they have done over the last several years: look to the UAE and Saudi Arabia for a bailout. However, in 2021, those two Gulf states will have their own problems as oil prices will almost certainly remain below the break-even point to balance their budgets.

The Gulf states will still have enough money to prop up their clients in Algeria, Libya, and Egypt for a few years, but will their own populaces accept such a choice when their economic prospects have considerably dimmed? Offering continued largess to their North African clients without using it as a stick to facilitate meaningful reforms, will only weaken the UAE and Saudi Arabia’s global influence over time without fundamentally improving the situations of their clients. Nonetheless, if history is any guide this backward-looking approach will be embraced by both clients and patrons.

What can the US do?

There is little the United States will likely do to influence these decisions. We are no longer behaving like the global hegemon. The current and former administrations have sought to withdraw from the Middle East, generally, while specifically, delegating policy making toward North Africa to the Europeans.

Nonetheless, the U.S. can constructively prevent two things at a very limited cost: the Tunisian government’s implosion and Tripoli’s takeover by rogue General Khalifa Hifter. Tunisia is facing tremendous headwinds, but at least it is attempting to look forward and constructively adapt in line with the will of its people. U.S. capacity building assistance should concentrate on Tunisia, where it might do some good. Additionally, the United States can use its substantial influence and the low price of oil to limit the ongoing interventions of the UAE in North Africa. The UAE’s military involvement in Libya is a primary reason General Hifter is in a position to continue the push on Tripoli. Similarly, Emirati and Saudi money allow the Egyptian regime to avoid any kind of market reforms.

Fundamentally, America should recognize that the hidebound, corrupt, and oppressive regimes currently in power in most of North Africa are not compatible with the future. Syria should be evidence enough that simply allowing regimes to collapse is no guarantee of a brighter future or containment.

The United States may not want to assert itself in the region now, but planning for the dire challenges bound to emerge after the pandemic is quite pragmatic. Regional governments may not have a vision for their own future, but there is no excuse for the United States to join them in pretending that tomorrow will never come.

America should plan for how it can support these countries in orderly transitions away from the worst excesses of authoritarian inefficiency. An Arab Spring 2.0 might erupt as a result of an abrupt wave of state failure and unemployment across North Africa in the wake of the pandemic. Although not necessarily a likely event, it is certainly foreseeable and not improbable.

The best part of planning for the worst, is the relief at never having to dust off those plans.

Jason Pack is a consultant, author, and commentator with over two decades of experience living in, and working on, the Middle East. He is a Non-Resident Scholar at the Middle East Institute, Former Executive Director of the U.S. Libya-Business Association, and Founder of Libya-Analysis LLC. Nate Mason worked for the U.S. government for eight years focusing primarily on U.S.-North Africa economic and commercial policy. His last assignment was Commercial Attaché, Economic and Political Officer at the U.S. Embassy in Tripoli from 2011 to 2013. He is currently a consultant based in Washington, DC. The views expressed in this piece are their own.