Dancing during the pandemic: Despite restrictions, music and dance retain a central role in Iranian society 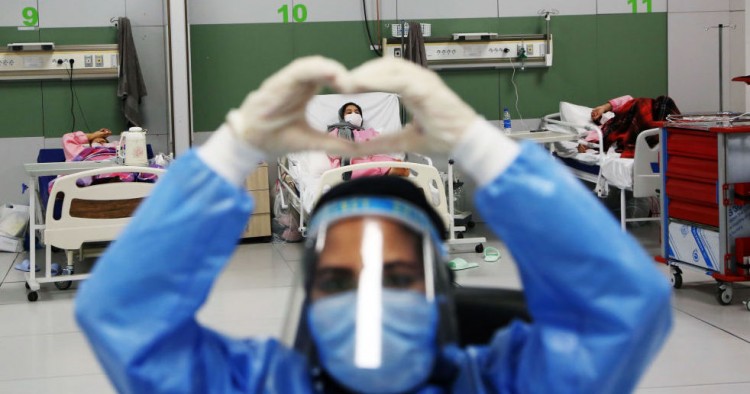 Since the outbreak of the COVID-19 pandemic, music and dance have become increasingly common in Iran’s hospitals and on its streets. Long disallowed in public after the Islamic revolution of 1979, they have become both a source of support for Iranians during difficult times and a way of resisting the regime. While the Islamic Republic has actively tried to discourage them over the past 40 years, music and dance have a long and unique history in Iran and have retained a central role in Iranian society. Unlike people in many neighboring Muslim countries, Iranians hold on strongly to their pre-Islamic roots and traditions.

The traditional role of music and dance

Dance in Iran in the form of plays, dramas, or religious rituals accompanied by music is thousands of years old, as a ceramic fragment featuring dancers from around 5000 BCE in the Louvre attests. Persian dance and music are as old as Persian civilization and played an important role in rituals and courtly entertainment in various Persian empires. Following the spread of Islam to Iran through the Arab-Islamic conquest of 650 CE, Iranian kings did not forbid the public from performing them, although some more traditional Muslims did view music and dance as contravening Islamic morals.

During the Pahlavi monarchy (1920-1979) music and dance were promoted by new media sources such as radio and TV. In 1966 the Shah established the National Iranian Folklore Institute with Farah Pahlavi, the former queen of Iran, as its president and tasked it with collecting traditional folk music and dances from all of Iran’s different ethnicities. In 1969 the School of National and Traditional Dance was established in Tehran. Traditional folk music and dance became part of Iranian identity and resonated with Mohammad Reza Pahlavi’s ideas of the “Great Persian Nation” and Iran’s continuity with its ancient past under King Cyrus the Great (600-530 BCE).

In the 1970s pop singers like Googoosh became very popular among young Iranians, even religious and conservative ones. During Pahlavi’s time, women could sing and dance and a number of bands performing traditional Iranian music were active. International classical music orchestras also held concerts in the country. The Shah supported musicians, especially pop singers, and traditional music and dance were often performed at national events and ceremonies, such as the Shah’s birthday. Music and dance were two popular pillars of the “Great Persian Civilization” and were given support to build national identity, along with other arts such as painting, poetry, and architecture that drew inspiration from pre-Islamic times.

As with so much else in Iran, things changed dramatically following the Islamic revolution. On July 23, 1979, Ayatollah Ruhollah Khomeini banned all music from Iranian radio and television. In a radio interview, he said it was “no different from opium” and “stupefies people listening to it and makes their brain inactive and frivolous.” Ayatollah Khomeini added that music had “corrupted Iranian youth” and robbed them of their “strength and virility.” “Music which might excite youth” was forbidden, he said, “if it's conducive to something which is not proper between the sexes, like inciting people to dance or creating some kind of feeling.” He declared, “If you want independence for your country, you must suppress music and not fear to be called old‐fashioned. Music is a betrayal of the nation and of youth.”

During the presidency of “reformist” Mohammed Khatami (1997-2005), there was a slight easing of official policy, with some traditional music permitted to be performed publicly, but women still weren’t allowed to sing in public. Despite the restrictions, however, Iranian youth began to play their own music and dance to local bands that were part of a burgeoning underground music scene.

In 2005, Iranian President Mahmoud Ahmadinejad banned Western music from state radio and TV stations. “Blocking indecent and Western music from the Islamic Republic of Iran Broadcasting is required,” according to a statement from the Supreme Cultural Revolutionary Council.

Despite all of the regime’s efforts to prevent it, music and dance became increasingly popular among young Iranians, and this has presented a huge challenge for the Islamic Republic. In 2014, three unveiled Iranian women and three men were sentenced to suspended jail terms and to be flogged for dancing to U.S. singer Pharrell Williams’ song “Happy.” The six young Iranians, all under the age of 25, were arrested for posting a YouTube video of themselves dancing on Tehran rooftops — exactly what Ayatollah Khomeini had hoped to prevent.

On July 9, 2018, Iranian state television broadcast apologies by several women who were briefly detained for posting videos of themselves dancing on their popular Instagram accounts, according to Human Rights Watch. Under Iranian law the definition of what constitutes acts against morality is vague, and the Islamic Republic has long censored art, music, and other forms of cultural expression, as well as prosecuted hundreds of people for such acts.

The impact of COVID

As one of the early epicenters for COVID-19, Iran has been especially hard hit by the virus, with more than 190,000 officially confirmed cases and over 9,000 deaths. Following the outbreak of the pandemic, medical doctors in Iran argued that music and dance could help strengthen the body’s immune system as well as lift the spirits and lessen the fear and anxiety among hospital patients and personnel. In an interview one nurse told a national TV journalist that she smiled at patients and sometimes danced in order to help them get better. Medical staff began to sing and dance together — doctors and nurses, men and women in public — recording videos of themselves and sharing them with the world.

Medical doctors are widely respected and trusted in Iranian society, and as a result they were able to get the regime’s unofficial permission to allow music and dancing among hospital employees. Millions of Iranians shared videos of singing and dancing nurses and doctors at several hospitals in Iran on YouTube, Instagram, and Telegram.

The videos went all around the world and there was no reaction from the regime. On the contrary, in several provinces governors supported the playing of music and performance of group dances with both doctors and nurses. In some cities officials even supported live folk music and group dance in the gardens of hospitals or outside their front doors.

The failure of cultural engineering

The Islamic Republic’s 40-year-long effort to reshape society in line with Ayatollah Khomeini’s ideas could not prevent the Iranian people from expressing themselves through music and dance in spite of the threat of being arrested or imprisoned. Music and dance cannot be removed from Iranian life; even if they are banned, the population will always have access to outside sources, like the music produced by the large Iranian diaspora.

In today’s Iran, music and dance remain as popular as ever and have become a way of resisting the regime’s policies, as well as celebrating traditional Persian culture. As the COVID-19 pandemic has made clear, they are also providing Iranians with much-needed support during a difficult time, strengthening their physical immunity and mental well-being. By weakening the moral, political, and religious justifications for the regime’s restrictions, the public resurgence of music and dance may even help to inspire other Iranians to challenge the boundaries as well.

Fariba Parsa has a PhD in social science with focus on Iranian politics and has conducted research at Harvard University, University of Maryland, and George Mason University. She is the founder and president of Women's E-Learning in Leadership (WELL) and works at Yorktown Systems Group as a Farsi instructor.