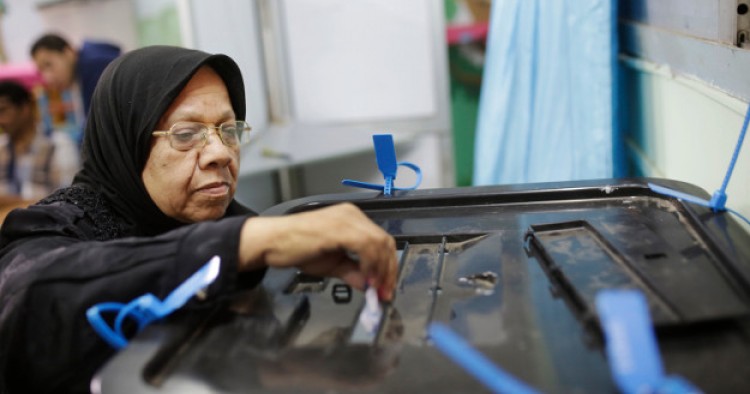 In the past ten days Egypt held a first round of parliamentary elections, announced renewed loan talks with the IMF, experienced new clashes with militants in the Sinai, and joined multinational talks to end the war in Syria. These headlines provide current glimpses into the country’s complex and challenging political, economic and security trajectories.

Politically, the parliamentary elections are a necessary and overdue step; Egypt has been without a parliament since 2012, and the elections are the third part of the Roadmap announced in July 2013. But the elections have been held in a very restrictive political environment with very little of the widespread enthusiasm that was seen in the 2011-12 parliamentary elections.  Voter turnout has been very low; even official sources cited figures ranging from 15-20%[1].   The pro-government coalition “For the Love of Egypt” appears on its way to a strong showing.  It is an alliance of political parties and includes leaders from the business, political, media, retired-military, and rural-notable communities.  The Islamist Salafist Nour party, which sided against the Moslem Brotherhood (MB) in 2013 and might have hoped to inherit the previously large Islamist vote, has done very poorly—at least in this first round.  The party with the biggest showing in 2012, the MB, is currently banned as a terrorist organization and, of course, did not participate.

The new parliament, once complete by December, will serve a five-year term.  In the new constitution, it has full legislative powers as well as the right to grant or withdraw confidence from the prime minister or individual ministers.  The incoming parliament is set to have a large pro-government majority, although it will likely include a wider scattering of alternative voices including Islamists, liberals, leftists and nationalists.   The new parliament will have a few weeks to review, amend and/or approve the hundreds of laws that have been issued by presidential decree over the past two years; expectations are that it will approve them in bulk before settling down to more regular parliamentary rhythms.

The parliament will add a layer of politics to a system that has been governed by decree for the past two years; how this limited politics will play out is yet to be seen.  In general it is likely to be a rubber stamp parliament that follows the president’s lead.  But some optimists hope that the parliament will at least create some space—more than is currently available--for political debate, for revising certain laws (such as the protest, local government, terrorism and NGO laws), and for reaching out to alienated and excluded civil and political groups.  They hope that over time it might help beat a pathway back to more inclusive and less repressive political life.

Despite their clear shortcomings, the parliamentary elections are a necessary and positive step that should be welcomed.  The United States and the international community should offer assistance and cooperation to the new parliament while continuing to press for more freedoms and inclusion.

On the economy, the announcement by Egypt’s International Cooperation Minister of renewed talks with the IMF for a $5.5 billion budget support loan points to Egypt’s continuing fiscal and economic crunch[2].   The government has taken necessary but painful decisions to reduce the deficit by decreasing energy subsidies and passing a civil service reform law to reduce the gargantuan civil service from seven million people to around five million; it is also planning to implement a Value Added Tax.

This has brought the budget deficit more under control but there is still an estimated $20 billion financing gap over the next two years[3].   And direct budget assistance from the GCC states, that was critical over the past two years, is in decline, and is also being directed less to budget support and more to projects and investments.  The economy has come back to moderate growth of just over 4%--after the crisis years of 2011-2013—but it needs to reach 8-9% if it is to make a serious dent in unemployment and underemployment, and lift millions of Egyptians out of poverty.

Some of the fundamentals of the Egyptian economy are promising: a large and fairly educated work force; an improving energy situation (especially after the latest large off shore gas find); high levels of internet penetration; a large domestic market and access to markets in the middle east and Africa; and improving internal and export transit facilities (ports, airports, highways, canals).  However, the conditions for both Egyptian start-ups and foreign investors remain challenging: daunting bureaucratic hurdles, unpredictable foreign exchange conditions, and uncertain regulatory environments.  Egypt ranks 126 out of 189 countries in the World Bank’s Ease of Doing Business index.[4]   It needs to be at least in the top 50 if it is to become an attractive hub.

The president and government are aware of these needs, but they face the entrenched interests of a massive state bureaucracy as well as the limited abilities of an impoverished public to endure more short-term pain with the vague promise of long-term gain.  The international community should help the government manage its short-term budget shortfalls on condition that it dramatically improves the environment for Egyptian start-ups as well as international investment.  Egypt can and should see the levels of growth that came to the BRICs and south Asian tigers, and only that will create the quantity and quality of jobs that poor, unemployed and underemployed Egyptians need.

On security, although life in Cairo and most of Egypt is relatively normal, the security forces are facing serious threats in Northern Sinai and the Libyan border.  The conflict in northern Sinai dates back many years, but got dramatically worse after the ouster of the MB in 2013 and after the resurgence of al-Qaeda and the rise of ISIS in Syria, Iraq and Libya.  The army has deployed tens of thousands of military personnel to the northern Sinai and dealt several blows to the ISIS-affiliated militants; but the toll on the local population, as well as on the security forces has also been high.  No conclusion to that struggle seems imminent.   Further West, Egypt is struggling to monitor and control its 1,200 km border with Libya, particularly as al-Qaeda and ISIS gain more footholds there.

On regional and foreign policy, Egypt is taking a more independent line.  It offered naval and air support to the Saudi-led campaign in Yemen, but declined to send any ground troops--a decision that has decidedly soured relations with Riyadh and other Gulf states.   On Syria, it has welcomed the latest Russian intervention[5] and underlined that the main priority in Syria is defeating terrorism; it acknowledges that Assad is part of the problem and probably needs to go at some point, but argues that that is up to the Syrians to decide. It has hosted meetings of the opposition and will be part of the multi-country Vienna talks on Syria.

In Libya, Egyptian authorities have soured on General Haftar and are hoping that UN mediation efforts will help deescalate the conflict.  They realize that Libya poses the most direct threat to Egypt and recognize the limits of their influence there.

Cooperation with Israel over Gaza and Northern Sinai has been very tight; but if unrest in Jerusalem leads to a third Intifada, the government in Cairo will find itself in a very difficult position.

Internationally, Cairo is diversifying its relations, although officials have no illusions that the US remains the dominant global player and Egypt’s most important partner.  Relations with the US have improved since the nadir of 2013-14 with the unfreezing of military aid, and Secretary Kerry’s participation in the March economic conference and Strategic Dialogue talks with his Egyptian counterpart in August.   But Egypt has also looked to China for large investments in infrastructure, mainly rail, and to Russia for a civilian nuclear power plant.

The Egyptian military remains largely joined at the hip to the US Defense department in terms of equipment and training, despite flirtations with Russia and France.   Cairo is asking for more help from the US in its challenges in Sinai and the Libyan border, in terms of surveillance drones, eavesdropping and bomb detection equipment, and more intelligence cooperation.

Helping Egypt succeed economically and face down its real security threats, while at the same time pressing it to make good on its own avowed commitments to democratization, requires a delicate balance. But Egypt has always been too big to fail; and its success can be transformative for the region.