The Delay of Transitional Justice in Egypt 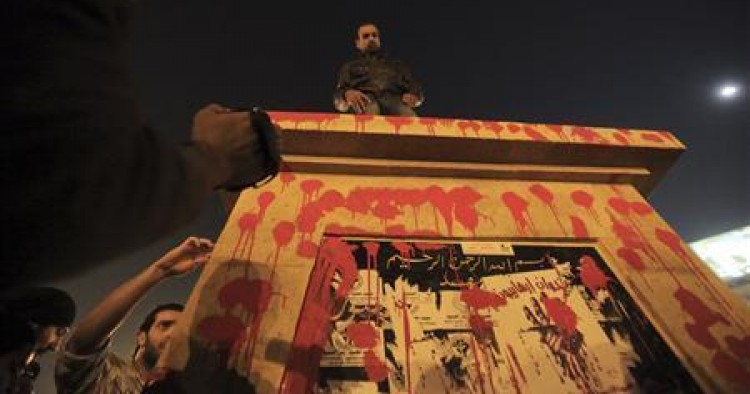 Directly after the toppling of Egyptian President Hosni Mubarak, General Mohsen el-Fangary, a member of the Supreme Council of the Armed Forces (SCAF), appeared on television to pay tribute to the martyrs of the January 25, 2011 uprising. This testament from the military made the family and friends of victims feel proud, and it fostered the feeling among Egyptians that the removal of the dictator had been worth the victims’ sacrifice.

At that time, Egyptians did not think much about the real meaning of transitional justice. Instead, they focused on the perpetrators of human rights violations and those who were guilty by association. Today, by again failing to distinguish between justice and collective retribution, the same mistake is being repeated.

The situation in Egypt has been very complicated, with the democratic process and path toward transitional justice shifting under four different ruling systems—Mubarak, SCAF, the Muslim Brotherhood, and the interim ruling authorities—over a short period of time. All four systems committed abuses against the people, leaving victims and cases to be investigated. The combination of sharp divisions within society, disagreements about transitional justice itself, and delayed government responses to people’s demands has made the situation particularly charged.

Since 2011, activists and civil society organizations have made lists of victims and started to collect evidence. The government has also paid some compensation to the victims and their families, and the government and individuals have made some efforts to help people recover from their injuries.

But demonstrations and clashes have continued because people have not seen real justice. All of the police officers that were accused of killing and abusing protesters in 2011 have been set free. Follow-up protests calling for the prosecution of those officers who had shot, tortured, or given virginity tests to female protesters saw more demonstrators killed. The public kept hearing that the perpetrators were “unknown” and that foreign actors were involved, but there was no evidence to support such allegations. On the contrary, activists exposed videos of police officers shooting protesters, but even multiple videos and a mounting number of victims have not been enough to start true investigations.

Though civil society initiatives and government committees have investigated the killing and torture of protesters, including a fact-finding committee initiated under Mohamed Morsi’s government, none have been efficient or transparent. Leaks from the fact-finding committee declared that both police and military officials were responsible for killing protesters, but no further steps were taken to prosecute them.

Immediately after the demonstrations on June 30, 2013, the interim president, Adly Mansour, appointed the first Egyptian Minister for Transitional Justice and National Reconciliation, Mohamed Amin el-Mahdi, which had been one of the original demands of the January 25 uprising. Yet the new ministry has unclear responsibilities and an unknown agenda. The president’s spokesperson stated that the new ministry is set to implement “social justice,” but the minister talks about issuing laws for respecting the Egyptian flag and changing laws regarding nationality. Indeed, few people involved in the ministry’s work can clearly define its tasks, and not many Egyptians even know about its existence.

Due to this ambiguity, different groups have had concerns about the ministry’s activities. Islamists have worried that it was created to pursue them and to hold them accountable regardless of their culpability, whereas opponents of the Muslim Brotherhood have been afraid of the opposite, namely that it might present a chance for the Brotherhood to escape punishment, as happened with Mubarak when prosecutors cleared all Mubarak regime figures in corruption cases and in regard to the killing of protesters for “lack of evidence.” Others have simply said that the ministry won’t add anything to the transitional process.

But the key issue on which to focus now is how the ministry can begin to achieve transitional justice. First, it must be independent from the government and thus exhibit impartiality, especially regarding restructuring and reforming institutions and investigating crimes under the four regimes. Otherwise, the transitional justice process could become selective or retaliatory.

The ministry also needs new legislation to support and facilitate its tasks. Article 241 in the newly-approved constitution states that the house of representatives, in the first legislative term (five years), must issue a transitional justice law that will “guarantee uncovering the truth…and suggest a framework for national reconciliation and reparation of victims, in accordance with international standards.” The article does not make it clear if the law would be a priority or if its issuance would come later in the term.

To demonstrate good intentions, those currently in power should at least begin to remove the most significant obstacles to transitional justice. In particular, the ministry should, as a first step, establish a high commissioner and should make an effort to educate and involve the citizenry in transitional justice. Furthermore, it should collect evidence, hold hearings, draft guiding laws, draw a road map, and set a clear agenda. The new commissioner should also work collaboratively with other ministries, and state institutions should provide support and help as needed. The ministry should also address a topic that has largely gone unmentioned: providing suitable protection for witnesses and families of victims and defenders.

Media and civil society also play an important role in forming the public’s understanding of transitional justice. They can spread essential information about the concept, its stages, and its importance in reaching reconciliation, reform, and reconstruction. Such efforts add transparency to the process and foster more citizen involvement.

But unfortunately, lack of professionalism abounds in the media when dealing with critical issues linked to justice. Disseminating hate speech, distorting facts, accusing people without evidence, and inciting violence undermines the transitional justice process. Talk show hosts have recently been known, for example, to call on viewers to use violence against protesters and, after the U.S. ambassador spoke about the need for political inclusion, to seize the U.S. embassy and expel the ambassador. And in July, during the Muslim Brotherhood sit-in in Rabaa al-Adaweya Square, television show host Youssef  el-Husseini called on people to assault Syrian refugees due to the belief that many of them support Morsi.[1]

As long as the media and civil society organizations are politicized and biased, the chaos in Egypt will worsen and transitional justice will be delayed. The success or failure of transitional justice will depend largely on Egyptians’ participation rate, especially those who were marginalized under previous regimes. Forgiveness from the disenfranchised is essential for reconciliation.

The delay of transitional justice is making Egyptians lose confidence in the process.  In mid-November of 2013, Prime Minister Hazem el-Beblawi inaugurated the first memorial for the victims since the January 25 uprising, but within a few hours it was destroyed. Though a memorial for these victims was one of the people’s demands, it came late—and after many of the perpetrators had been released from custody. In the eyes of many Egyptians, the memorial does not adequately honor the victims.

It is likely that Egypt will eventually arrive at reconciliation and inclusiveness, but after paying a heavy price. Transitional justice in Egypt needs the proper psychological climate and community support for reconciliation to take place, which necessitates transparency and inclusion at every stage. Justice in Egypt must start with a political decision to reform state institutions and with an end to the spread of hatred and violent speech through the media. Such moves will prepare Egyptians to live in a markedly different country than the one they have known thus far.