Despair and Hope for Syria: Q&A with Hind Kabawat 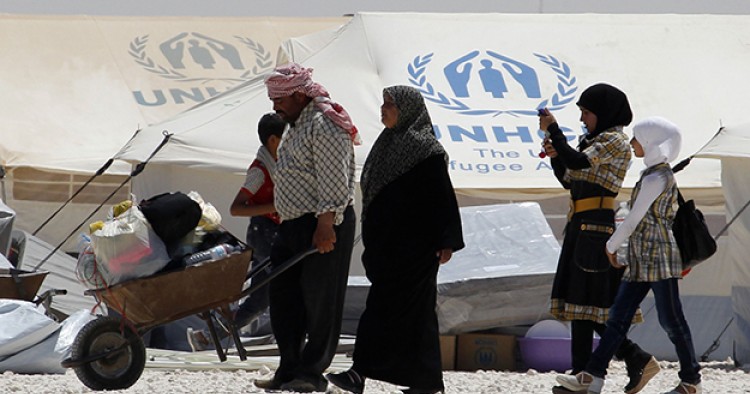 Hind Kabawat is a senior program officer at the United States Institute of Peace (USIP) and a senior research associate at the Center for World Religions, Diplomacy and Conflict Resolution (CRDC) at George Mason University. Since 2012, she has been conducting periodic conflict resolution and peace-building workshops for communities within Syria and for Syrian refugees living in Jordan and Turkey.

What issues do you address in your conflict resolution workshops?

The workshops, which focus on youth and women, aim to enable people to mitigate conflict in their own communities. We target youth between the ages of 18 and 30, and we train them in negotiation, leadership, critical thinking, and problem solving. Women play a key role in peace-building, particularly as mothers and teachers. At our workshops, women of different faiths come together and devise ways to strengthen their communities based on what they have in common, such as the desire to see their children grow up in peace. When a workshop ends, participants take what they learn and teach others. They also remain connected through a Facebook page, where they continue to post articles and share ideas.

We also bring as much humanitarian aid as possible. On my last visit to the Zaatari camp in Jordan, for example, I brought 90 kilograms of medicine for children and winter jackets donated by people in the Washington, D.C. area.

How would you describe the current situation for Syrian refugees and for civilians living in opposition-controlled areas within Syria?

People want to go home. They are waiting, frustrated and anxious, for the day when that will be possible. The majority are poor and have almost nothing—not enough food or blankets. Many NGOs are trying to help, but they can’t keep up with the demand. Some kids go to school and some don’t. Some small organizations and wealthy individuals have created informal schools to provide local children a minimal level of education during the war.

What changes have you noticed—whether in people’s outlooks or living conditions—over the last three years?

I see more fatigue than before, and people have started losing hope. When they first escaped from regime-held areas, trying to save themselves and their children from regime attacks, many thought their hardships would be temporary. Now many believe that they have lost everything, permanently. In 2012, I met one displaced woman who had brought a little suitcase with her, and she didn’t take her clothes out because she thought she’d have to repack them very soon, in order to return home. That’s how optimistic people were.

Many Syrians thought the world would intervene once the scale of the violence became clear. But they’ve seen both the regime and ISIS continue to massacre civilians and get away with it. People started the revolution to demand freedom and dignity, and in 2012, they still thought that these were within reach. Now they have experienced years of humiliation and they don’t see anyone coming to their aid.

What has been your assessment of the Western-led military intervention in Syria, and what is the assessment of Syrians you have visited?

In August 2014, I visited a town that the Western-led military coalition had bombed. There was no good reason to bomb that town—it’s made up entirely of civilians. The people there are very upset and confused because no attempt was made to warn them, or to communicate the coalition’s strategy, before the bombing began.

Also, the regime and the Western military are bombing the same places, so they look like partners. Assad has managed to involve the international coalition in something like a joint venture: They bomb at night and he bombs by day. The coalition wants to eliminate ISIS and most Syrians share that goal, but they have other urgent concerns. It was Assad who enabled ISIS to enter Syria, and his army has also killed Syrian families. I met one woman who had lost three sons and three sons-in-law to government forces. How can she be asked to return home and resume normal life with Assad in power?

In our workshops, most participants acknowledge that the war cannot end without negotiating with the government. They understand the need to sit down at the table and reach some sort of compromise or power-sharing arrangement. But Assad intentionally pushed Syrians apart and ignited a sectarian civil war, and they believe he should be held accountable. Some form of transitional justice is needed.

They also talk about the need to end the proxy war between Iran and Saudi Arabia. These conversations raise difficult questions: To what extent, if at all, should Iran and Saudi Arabia be included in negotiations? In a recent speech, Iranian President Hassan Rouhani emphasized Iran’s deep involvement in Syria; a negotiated solution will have to include Iran.

What can Western governments and citizens do to more effectively assist the majority of Syrian civilians who support what you have called the “third option”—not ISIS or the regime, but a democratic, pluralistic society?

Western governments and their citizens should support the moderate opposition, put more pressure on the regime, and provide more humanitarian aid. Better communication is required so the majority of Syrians know that the West cares about their existence and has not given up on them.

In your writing, you call particular attention to the bleak set of choices faced by many Syrian youths. What can be done, by Syrians and non-Syrians, to help these young people?

Aside from the need to open more schools, a basic problem is that Syrian youth have no opportunity for political involvement. They feel isolated, as if they have no place in society or platform for expression, and this can lead to a sense of bitterness. Many have friends or siblings who have been wounded, tortured, or killed. One young man I met had lost 33 people in his family alone. Another had lost 120 of his friends and family members. They have endured painful experiences yet don’t feel that they have a role to play in bringing about a solution.

As a result, recruitment attempts by ISIS are a constant threat. I remember one young man who used to come to our workshop—he seemed so happy to participate. His mother was very poor. They had nothing and depended on donated baskets of food. Like many young people, he had been sitting around the camp without a purpose. So when someone from ISIS eventually came and offered him a role as a fighter, he accepted it and disappeared.

More conflict resolution training is needed to address these problems. Recently, with USIP funding, we trained a group of women who gathered along Turkey’s southern border. These women represented every region of Syria and included, in one group, liberal and conservative Muslims, Druze, Alawis, Christians, and atheists. They discussed how to become agents of change in their communities and are now putting together an action plan. Their goal is to encourage dialogue on controversial issues and to protect Syrian youth from ISIS recruiters. The women plan to teach anti-radicalism in their local schools and to train other people in their communities to become teachers themselves.

After your first post-revolution visit to Syria two years ago, you noted that civil society was largely intact, and you expressed optimism about Syria’s post-Assad future—do you still feel that sense of optimism?

I’m still optimistic. In the Western media, there have not been enough stories about good work being done by the Syrian people in response to the war. When I visit Syria, I see many religious men teaching that it is not acceptable to kill in the name of God. I see women working hard to overcome the difficulties they face, and I see volunteer work by young people who put aside their religion and say, “We’re Syrian first.” For example, the group of women who participated in the workshop at the Syrian-Turkish border began to call each other “sister,” and even if a Sunni woman had lost ten family members during the war, she would still hug an Alawi colleague.

I am also thinking of a small new school established on the Turkish border by Project Amal ou Salam. It opened for the first time on a Monday, and when the teachers arrived at eight in the morning, the students were already there, waiting for the doors to open. That gives me hope.

How is the crisis in Lebanon impacting Syria’s economy?