The Education of Syrian Refugee Children 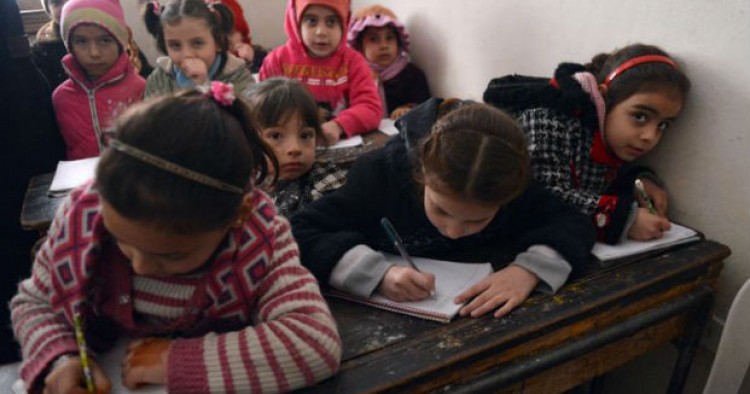 If the future of a nation is built on the competencies learned by its children, then the future of Syria gives cause for great concern. Since the start of the civil war in Syria in 2011, at least 3 million children have been unable to go to school, the vast majority of them within Syria itself.[1] Interventions are urgently required to educate these children so that they can help rebuild Syria.

Even before civil war broke out, urban schools were straining to cope with social and economic changes in Syria. The worst drought in over fifty years (from 2006 to 2011) stretched communities to the breaking point and pushed 2-3 million (out of a total population of 20.7 in 2011) into “extreme poverty.”[2] Rural families had to migrate into nearby cities to feed themselves.[3]  These rural Syrians steadily increased the number of displaced persons already living in the cities, including many who had immigrated to Syria in the aftermath of the Iraq War. Swelling numbers of refugees raised urban unemployment and caused social disruption and water and food insecurity for millions. These displaced rural children enrolled in urban schools that were hard-pressed to accommodate the growing numbers.

More than 6.5 million Syrians have been displaced.[4] Some refugee families (often headed by women) fled to “safe areas” in northern Syria that often became conflict zones themselves and caused another displacement.[5]  Three years into the civil war, about 2.2 million school age children cannot go to school in Syria.[6] One in five schools no longer functions—thousands of schools have been destroyed or damaged, and others are being used to shelter internally displaced people.[7]  Schools lack books, desks, and sanitation facilities; in some areas many teachers have fled.

Those children who still go to school in Syria must travel to and from school and study in a community at war, with the chaos that comes with it. In Al-Raqqa, Idlib, Aleppo, Deir Azzour, Hama, and Darra‘a – all battlefield areas --the educational system has more or less collapsed, and school attendance is well below 50 percent. Idlib lost 25 percent of its schools, and Aleppo lost about 13 percent; attendance is less than 30 percent.[8]

Living as Refugees in Neighboring Countries

About 2.7 million Syrians fled the country.[9] The vast majority of them (2.3 million) now live in Turkey, Lebanon, and Jordan; Iraq and Egypt have Syrian refugee communities as well. More than half a million Syrian refugees are school-age children who do not attend school.[10]

Although Turkish, Lebanese, and Jordanian schools are open to Syrian children, many schools are overwhelmed by their numbers. Most Syrian refugees are unable to attend school (in Turkey, 63 percent; in Lebanon, 80 percent). In Iraq, 66 percent of Syrian children are not in school, a percentage that has probably risen as a result of the fighting that began in December 2013. The percentages of Syrian children who do not attend school are not much better in Jordan (45 percent) and Egypt (47 percent).[11]

Turkey has opened its borders to over 500,000 Syrians, and the government has set up 22 refugee camps. Some refugees are living in urban areas, making it difficult for authorities to locate the children who are not going to school. Many children, after missing years of school at home, are unable to cope with changes in curricula, schools, and the unfamiliar language of instruction (Turkish).[12].

The number of Syrian refugees in Lebanon has overwhelmed that country of some 4.2 million citizens. Over one million Syrian refugees have arrived since 2011.[13] Currently about 53,000 Syrian refugee children are enrolled in Lebanese public schools.[14] Lebanese public schools were already underfunded before the crisis and are hard-pressed to accommodate the additional influx. Seventy percent of the government schools lack water and toilets. There are no science or language labs, there are limited library books, and the outdated curriculum is taught from mimeographed texts.[15] For many of the Syrian children, these school conditions are inferior to their former schools in Syria. Refugee children have difficulty adjusting to the Lebanese school curriculum, which includes a portion taught in either French or English. Caritas, a Roman Catholic charity, conducts after-school classes to help prepare Syrian students to enter Lebanese public schools.[16]

Jordan, a country of six million people, has limited economic and social resources. The leaders and educators are struggling to accommodate the needs of the 600,000 registered Syrian refugees, approximately half of whom are school-age children. In 2013 no more than 55 percent of the total number of school age Syrian refugees were enrolled in schools.[17] By the end of 2013, seventy-nine Jordanian schools had added second shifts to accommodate the influx of Syrian children. This added to the strain on teachers and school infrastructure. The Jordanian government challenges include the need to construct pre-fabricated classrooms and train teachers and mental health professionals. In addition to coping with over-crowded schools, many Syrian students have found it hard to adjust to the new curriculum. Refugees lack adequate psychological support and the financial means to cover costs of books, school uniforms, and transportation to school.

The Egyptian government claims that 300,000 Syrians are in Egypt, of whom 125,000 are registered as refugees. The actual—or potential—numbers might be higher, as Egypt’s security apparatus has tried to stem a large refugee influx and has often returned refugees back across Egypt’s borders. Palestinian Syrians who enter Egypt have been held, with their children, in overcrowded police stations. According to Human Rights Watch, over 250 Palestinian children (some as young as 2 months old) live in jails.[18] Egypt sees Syrian refugees as a possible security risk and has not been able to make the needed educational accommodations for the Syrian children.

Some parents of Syrian refugee children throughout the region also keep them out of school because they need their children to earn money. In households headed by women, children might be the sole family breadwinner, and they, like their sometimes illiterate mothers, are easily exploited by employers.[19]  A recent shock has been the offering of daughters of refugees as wives for a fee on the internet. One site, after 19,000 hits, was taken down amid protests. It was put up the next day with the same purpose but with an Islamic name.[20]  Coping with poverty, combined with the trauma of displacement, stretches refugee families to the breaking point, and in this context education might take a back seat to other pressing needs.

International funding earmarked for the education of Syrian refugee children in host countries is required. This money can be used to expand existing facilities, to create supplemental materials, and to pay for school tuition. (When Iraqi refugee children flooded Jordanian schools after 2004 or 2005, philanthropic organizations paid for their school tuition.)

Specific programs can be set up to address the needs of refugee schoolchildren:

1. After-school programs with Syrian curriculum and Syrian Arabic-speaking instructors can be set up to improve the chances that children do not fall behind academically. Instruction packets based on local school curricula can be distributed to students and local teachers  can be hired to facilitate their self-paced learning. Children with mental stress will feel less pressure to learn on lock-step academic schedules.

2. To address the needs of students who have been out of school for a long time, shortened school day programs can be set up with academic and mental health components.

3.  Syrian or other Arab teachers should be trained to provide academic remediation to refugee children.

Children learn negative lessons about their future opportunities when they experience poverty, severe and sustained physical and mental distress, and limited school access. An alarmingly large number of Syrian children have received an inadequate education or no education at all since civil war erupted in Syria in 2011 and their families were internally displaced or became refugees in neighboring countries.

Maria Calivis, a regional director of UNICEF, sums up one of the long-term problems facing Syria: “If this problem [failure to educate youth] is left unaddressed, the children will lose hope, especially the adolescents . . . They will replicate and perpetuate the violence that they have seen. And they will lack the skills and knowledge that one day will be needed to rebuild Syria.”[21] One Syrian teenage refugee girl, expressed her despair this way: “‘Without school there is no future,’ she said. ‘There is no happiness.’”[22]

[6] Nicholson, “Getting Syria’s Lost Generation of Children into School.”

[12] One pilot educational effort is taking place in Gaziantep, Turkey, where volunteers teach a Syrian curriculum in Syrian Arabic (rather than in Turkish) in a makeshift school. In this pilot project the children are being prepared to return to Syrian schools. Norimitsu Onishi, “For Most Young Refugees from Syria, School is as Distant as Home,” The New York Times, 22 December 2013.

[13] Onishi, “For Most Young Refugees from Syria, School is as Distant as Home.”

[14] Onishi, “For Most Young Refugees from Syria, School is as Distant as Home.”

[16] Nicholson, “Getting Syria’s Lost Generation of Children into School.”

[21]Onishi, “For Most Young Refugees from Syria, School is as Distant as Home.”