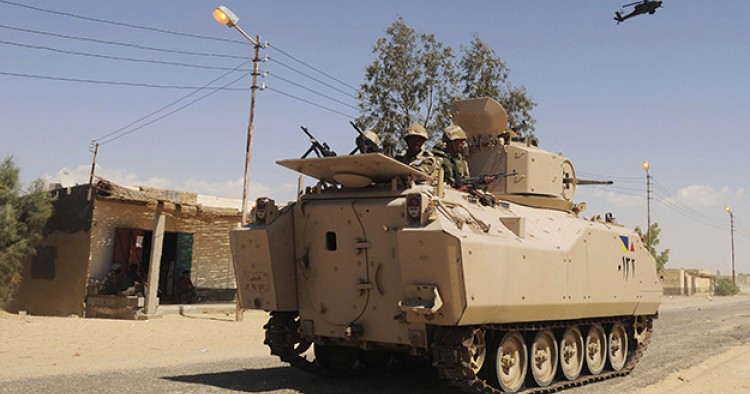 Egyptian President Abdul-Fattah el-Sisi is no Zionist, as senior Israeli interlocutors like to point out, but his vision of state sovereignty and Egyptian national security often closely aligns with the interests of Israel. When Sinai’s Ansar Beit al-Maqdis, Egypt's most lethal jihadi group, recently pledged allegiance to the Islamic State in Syria and Iraq, perhaps the most interesting response was the non-response by the governments of Egypt and Israel. From the view of both, the origins and ideologies of Islamist groups are all the same. Therefore, what a group calls itself or the formality of ties is, for them, irrelevant. Israel has for years referred to the broad phenomenon of “global jihad.” For its part, Egypt has called on the international coalition against the Islamic State to counter a broad spectrum of what it considers radical Islamist groups across the region, including the Muslim Brotherhood.

Bilateral security relations have expanded since July 2013—mostly in response to the expanded threat Egypt faces from Sinai. However, military-to-military and intelligence-sharing ties were close under the presidency of Mohamed Morsi as well. Indeed, it was under Morsi’s leadership that the Egyptian military first began cracking down on the smuggling tunnels underneath the Sinai-Gaza border. At the time, Israeli leaders were both surprised and pleased at the measures Egypt took in Sinai and especially the role it played in ending the 2012 Gaza war. Despite this, Israelis never trusted the Muslim Brotherhood leader, who regularly spoke of respecting the peace treaty but rarely mentioned the word “Israel” and refused to speak with his Israeli counterparts.

It is an accurate assessment to point out that the Israel file, and national security generally, stayed in the hands of Egypt’s security establishment during the Morsi administration. While entirely hypothetical, Israeli leaders were concerned about what would happen to bilateral relations over the long-term if Morsi managed to consolidate power and govern in a way more aligned with Muslim Brotherhood ideology. When the military removed Morsi in July 2013, erasing or at least setting back this feared alternate future, Israel and its backers heaved a sigh of relief and urged the international community to support the development.

The continuity of Egypt’s Sinai policy from late 2012 to today is likely the influence of Sisi, who was appointed defense chief by Morsi, served in an outsized role in the interim government that followed, and now leads Egypt outright. Unlike his predecessor, Sisi also publicly talks about Israeli security and is open about discussions he has with Israeli Prime Minister Benjamin Netanyahu. Sisi likely mentions Israeli security for the same reasons Morsi spoke of the peace treaty: to gain U.S. support for, or at least quiet acquiescence of, his domestic policies and actions. It bears repeating that—to the contrary of propaganda from both the Muslim Brotherhood and Sinai-based jihadis—the Egyptian military operates to protect sovereign national interests. As outlined in the Egypt-Israel Peace Treaty, Egypt does coordinate with Israel in carrying out operations in Sinai, but whether these operations also serve Israeli interests is entirely irrelevant to decision-makers in Cairo.

Given the common interests between Israel and Egypt—and, indeed, among Israel and several regional states—in countering Islamist violence and more generally pushing back the rise of political Islam, Israeli and even American leaders have expressed the possibility of a paradigm shift in which Israel can be an accepted part of the region. Netanyahu’s speech at this year’s UN General Assembly suggested that Israel could build relations with Egypt and others even as the Israeli-Palestinian conflict simmers.

Yet despite 35 years of peace and increased security cooperation over the past couple of years, Egyptian-Israeli relations have never been “normal.” Egyptian artists and academics continue to boycott Israel, and anyone interested in visiting Israel must seek approval from state security. One area to watch for changes in this “cold peace” is the newly developing Eastern Mediterranean energy market. Egypt’s gas shortage has resulted in a loss of supply for the foreign companies BG Group and Union Fenosa Gas (UFG), which no longer have a product to export from Egypt to European markets. BG and UFG are now interested in processing Israeli gas at their Egyptian facilities—agreements that, if signed, would require Egyptian approval. In November, representatives from Noble Energy—the American company with a majority stake in Israel’s offshore gas fields—participated in the largest U.S. trade delegation to Egypt, no doubt in part to make the case of the importance of approving these private-sector deals.

Such agreements would, indeed, be beneficial for Egypt. The importance of these deals for the private companies involved, and the requirement of Egyptian approval, gives Cairo a great amount of leverage. Egypt’s diversion of energy to its domestic market has resulted in a loss of billions of dollars for international investors and subsequent international lawsuits. Egypt's oil ministry bluntly stated earlier this year that no new deals would be approved until these arbitration cases are solved, that is, dropped. Instead of, or in addition to, rents, Egypt could even siphon off some of the Israeli gas for its own domestic needs.

While entirely beneficial in an economic sense, such agreements would be politically controversial. This is especially true in light of the controversy and perceived corruption surrounding a previous Israeli-Egyptian gas deal: a 2005 arrangement that sent Egyptian gas to the Israeli market through a company controlled by a close Mubarak ally. One Egyptian knowledgeable of bilateral relations with Israel pointed out that the controversy was less about selling gas to Israel than about the lack of transparency in the details. He noted that Egyptian officials are now more responsible in discussing bilateral ties and that a gas deal would be approved by the general public as long as the deal is transparent. Corruption was indeed the main complaint against the 2005 gas deal, although for others the issue was compounded by the corruption allegedly favoring Israel. If the deal is transparent, Egyptians may be further incensed if they see Egypt paying much more for Israeli gas than the price at which it sold its gas to Israel.

However, bilateral relations between Egypt and Israel—even when mutually beneficial—are still not entirely transparent. This opaqueness is purposeful, both because the Egyptian government does not want to publicize issues of national security and because Cairo wants to avoid being linked to certain Israeli government policies or actions of which the Egyptian public is critical. As such, the Egyptian government may have been in favor of some military action by Israel against Hamas this summer, but its foreign ministry harshly criticized Israel for specific incidents in which large numbers of Palestinian civilians were killed. Similarly, Sisi may be more open about relations with Israel, but in the same breath he often makes clear that these relations will not be “normal” until the Palestinian issue is resolved.

For all the publicized shared interests and mutually beneficial ties, then, it is likely that Israeli-Egyptian relations will remain strong but behind-the-scenes.