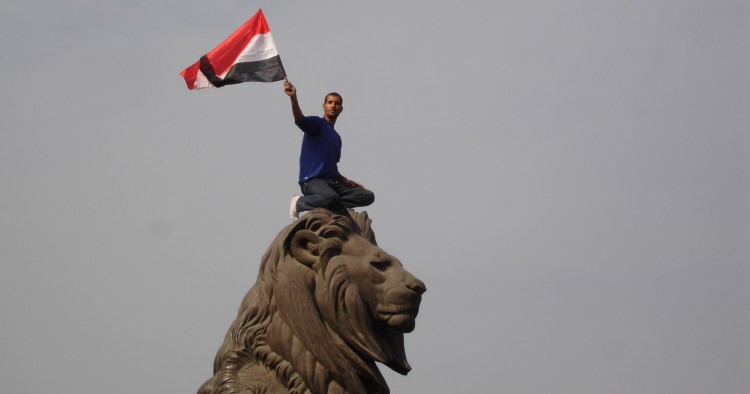 Looking across the Middle East and North Africa (MENA), there is a real fear that both reform movements and revolutions risk snatching defeat from the jaws of victory. The momentum that made so many inspirational gains a few months ago is slowing, and the forces of conservatism remain in control. The only hope is that stamina, vigilance, and strategy will lead to a complete transition to democracy in at least one of the region’s countries. Not one revolution has yet been completed. If such a success is to happen soon, I hope it will be in Egypt.

The precarious position of the Egyptian revolution shows how the military establishment might allow the toppling of a dictator but not the relinquishing of its hold on power. In Syria, Yemen, and Libya sufficient loyalty from the military exists for the unleashing of lethal force against civilians on behalf of dictators. The situation of reform movements in other countries such as Jordan, Morocco, and some of the Gulf States continues to remain uncertain. Despite these challenges, there is no doubt about the momentous change that has already taken place across the MENA region. A previously secure status quo has been rocked to its foundations. Everything is in the balance, and no one can predict with any certainty which side of the political spectrum things will fall — continued autocracy or fledgling democracy.

What happens in Egypt is of particular strategic importance. It has the largest population — 80 million people or one quarter of all Arabs. It lies at the geographical center of the Arab world. That world has a variety of governments (monarchies, secular dictatorships, and limited representative legislatures) as well as ethnic, religious, and historical differences. Despite this variety, there is huge potential for a democratic Egypt to inspire, support, and influence similar transitions. A democratic Egypt would be a glaring and uncomfortable example for those smaller autocratic regimes that attempt to cling to the status quo. Their standing will be even further diminished in the eyes of the world and of their own people. Its indigenous democracy movement, free to operate in a newly liberalized political space, could provide strategic, moral, and practical support to activists in other movements. A democratic Egyptian government, like that of the Czech government after the Velvet Revolution, might see it as a duty to support democratic aspirations beyond its own borders. Together with the civil society it would have to represent, it might work towards the goal of a pluralist, democratic, and stable MENA region. An Egypt that has not only brought down a dictatorship, but also emerges as a democracy, could be a powerful force for regional change.

None of these idealistic consequences of a democratic Egypt are guaranteed. A new government will have significant domestic problems to deal with, including high levels of unemployment, extreme poverty (40% of people living on $2 a day), and the economic damage of a year of political turmoil. But an energized people, a reinvigorated civil society, and a government with new idealistic ambitions can rise to a historic occasion. Just the mere possibility of these outcomes makes the hope for a full and stable transition to democracy in Egypt all the more enticing. But the revolution is far from complete.

A crucial task of the democratic movement during this time is to avoid a common tragedy of so many historical revolutions, as those of France in 1789, Russia in 1917, and Iran in 1979 — the hijacking of power by repressive political forces. When political turmoil and deteriorating economic conditions drag out for too long, well-disciplined, organized, and undemocratic forces promising order eventually seize their opportunity to take control. In Egypt, protestors remain active in Tahrir Square. In a recent protest march, peaceful demonstrators were violently attacked by pro-regime thugs wielding swords, knives, and rocks. The army, out in force, stood by and did nothing as hundreds of protestors were injured. Once again the hospitals have been filled with the bloodied and the beaten. Activists continue to be sent to military tribunals and then to jail, while members of the regime, responsible for over 800 deaths since January 2011, remain at large. Restrictions on the press and freedom of expression are curtailed in ways that former President Husni Mubarak would be proud of. This is a dangerous time for the revolution. To remain non-violent, disciplined, and unified will be hard but essential.

The military council seems to be moving ahead with elections before the end of the year. Foreign election monitors will not be allowed to observe the process. The movement is under pressure to dive into the competition of electoral politics before all of its demands have been met and before conditions for a truly democratic process are in place. It is forced to compete when it might prefer to coalesce around the core demands of the revolution that started in January. Though the ruling Supreme Council of the Armed Forces (SCAF) and the Muslim Brotherhood might want elections to be held before the liberal opposition has time to organize, early elections do not guarantee their candidates’ success. Both lack charismatic leadership and have until now lagged behind the moderate, secular, and democratic revolutionary movement — a movement that has proved itself well in the art of winning over public opinion and mobilizing people to come out and take action. When push comes to shove the SCAF’s and the Muslim Brotherhood’s interests appear to diverge beyond a short-term electoral strategy. The Brotherhood, which has renounced violence and entered into broad-based coalitions, does not seem to be the monolithic and radical organization it once was. If it eventually does do well in an election, by no stretch of the imagination will it result in a radical Islamic theocracy. And even if it did attempt to impose strict religious laws that denied fundamental rights, neither a democratic movement that has just brought down a dictator nor a secular military establishment would sit idly by.

Unlike many of the Eastern European democracy movements in 1989, which had a recognizable and trusted dissident leadership with popular support, the situation in Egypt is different. There is not a clear and identifiable leadership that can negotiate transition and contest power in the same way that Vaclav Havel or Lech Walesa and their teams did. There are older opposition politicians that have backed but not led the revolution so far. The horizontal leaderless nature of the Egyptian movement has been a real strength in achieving the overthrow of Mubarak. The question now is whether it is capable of ensuring a transition to democracy.

Otpor! [Resistance!], the Serbian student movement that helped topple Milosevic has already been studied by some of the key Egyptian activists who toppled Mubarak. But maybe Egyptian activists have yet to employ the most important strategy from the Otpor playbook. Otpor forced Serbia’s fragmented opposition to unify around a single candidate, and then successfully mobilized the electorate, both traditional older voters and progressive (usually apathetic) younger ones, to complete their revolution at the ballot box. It did this despite the anti-democratic actions of the Milosevic regime and a tough and restricted operating environment. It’s been done before, and in Egypt can be done again. The forces and conditions that started the Egyptian revolution are still there to complete it. A massive young population looking for better economic opportunities, dignity, and expanded rights; the availability of communications technology that facilitates the expression of discontent and political aspiration; the ability to organize a resistance to the existing system; and most of all a movement that has shown its ability to be strategic and disciplined in pursuing its goals. With a strong and unified opposition that is able to mobilize all the progressive elements in Egyptian society, complete transition to democracy is still very possible. If they achieve this goal — if they turn spring to summer — it will be a wonderful day not only for Egypt, but also for North Africa, the Middle East, and the world.