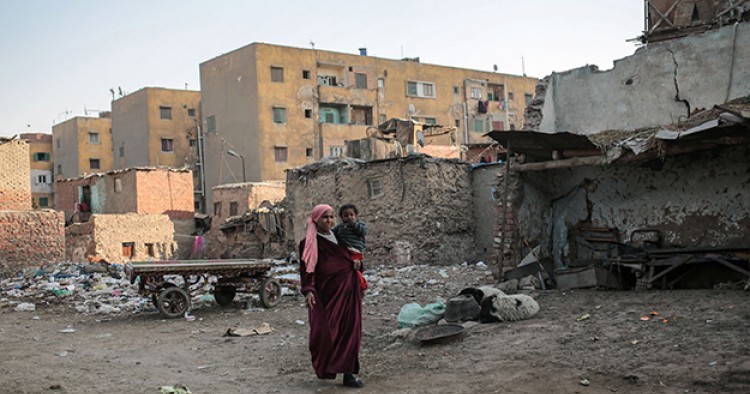 What Egyptians call the azmit al-iskan—the housing crisis—is exemplified by the 1986 movie, Karakon fi-l-Shari‘a, or Prison in the Street. The film depicts a typical middle class family that, evicted from its condemned home, must resort to living in a horse-drawn caravan because a regular apartment is unaffordable. The “prison” in the title is a reference to the father's numerous altercations with the police, who deem his attempts to make a home quasi-legal—not illegal, but also not legal. These attempts eventually end with the family squatting on desert land, where a community of similarly displaced families has started to build their own informal shelters.

The film is still relevant almost 30 years later, as Egypt’s housing crisis is far from over. The reality is that the country’s property market is unregulated, and the inflation of property prices has far outstripped any rise in income, especially for the poor, forcing a vast majority to seek inadequate housing in informal settlements. Many forces have worked together to promote an unregulated property market, in which deregulation, as lawyer and urban planner Peter Marcuse points out, “is a conscious decision by authorities.”[1] Chief among these forces is the fact that the Egyptian government is the country’s largest landowner through various state-owned agencies, and it has been in its interest to maximize profits from land sales.

The largest of Egypt’s urban landholders is the Ministry of Housing's New Urban Communities Authority (NUCA), which administers almost one million acres of land designated for urban development.[2] When prime ministerial decree 350/2007 removed almost all restrictions on foreign companies and individuals buying property in Egypt, prices spiked 116 percent overnight in the suburb-like “new cities” around Cairo that NUCA administers and where most land speculation occurs.[3] The property boom that ensued from 2007 until the January 2011 revolution saw land prices there balloon at a rate of 148 percent per year.[4] By comparison, the prices of so-called prime locations on the riverfront in the heart of Cairo went up 44 percent a year in the same time frame,[5] still a massive increase.

There is little data available to measure the effect of rising land prices on housing prices, as Egypt does not have a house price index; though the Ministry of Housing and the World Bank had promised one as part of their Affordable Mortgage Program, it has not yet been delivered.[6] This leaves only one standard of measurement: the price of social housing units that the Ministry of Housing offers. A quick analysis shows that the price of the cheapest of these units has been rising 14 percent per year over the last eight years.[7] In comparison, according to the national census authority, average incomes increased only 1 percent per year between 2008/2009 and 2012/2013. At the same time, poverty has increased, with 26 percent of the population currently living below the national poverty line.[8]

With such a wide gap between house price inflation and income, it is not surprising to find that on a global level, Egypt has one of the most unequal housing markets. With a house price-to-income ratio of 11, Cairo comes in tenth out of 18 Arab cities on the crowd-sourced Numbeo cost of living index,[9] with less affordability than all of the Gulf cities, including Dubai. Cairo also trails all North American cities on the index, including New York, as well as most Western European capitals, with the exception of Paris, London, and Rome.

In all of the cities ranked as more affordable than Cairo, varying forms of property regulation are used, not only to protect residents from rising housing prices and rents but also to protect the economy from unsustainable growth that may lead to recession.

Most Gulf countries do not allow foreigners or foreign-owned companies to buy property. Even in the extreme case of Dubai, whose economy is based considerably on billions of dollars in foreign property investment, the Land Registration Law—Law 7/2006—limits both leasehold and freehold property ownership by non-citizens of the Gulf Cooperation Council to designated areas of the city. These are mostly in the large-scale developments of Jebel Ali, the Palm Island projects, the World Islands, and Dubai Marina.[10]

The fact that investment and speculation in Dubai’s property market are limited to predefined areas—in addition to new real estate regulation after the 2008 property bust[11] and a comprehensive housing aid program for citizens[12]—has helped protect the (albeit small) local population from house price inflation. With a citywide average house-price-to-income ratio of six, Dubai is almost twice as affordable as Cairo.

In the Western European cities more affordable than Cairo, a range of measures discourages property speculation by both citizens and non-citizens, including complex bureaucratic processes that incur high costs and taxes, as well as various forms of housing aid and subsidization for residents. In Germany, for example, a capital gains tax of 25 percent is incurred by both citizens and foreigners if property is sold within 10 years of purchase, a measure that discourages speculative buying. Under Danish law, foreigners wishing to buy property in Copenhagen must apply for permission to do so.[13]

Because the Egyptian government has identified property and construction as main drivers in its plan to revitalize the economy, policies improving affordability should take center stage. However, this has not been the case. Egypt’s 2030 Sustainable Development Strategy, prepared over the last six months as a vision for the country’s medium- and long-term economic approach, has framed the housing crisis as one of production, setting a goal of building 7.5 million homes over the next 15 years.[14] Nowhere in its pages is there mention of affordability.

At the March 2015 Egypt Economic Development Conference, the first stages of the Egypt 2030 strategy were implemented, as NUCA signed $12.7 billion in real estate deals with Arab developers[15] and the government launched the $45 billion new administrative capital near Cairo that includes vast amounts of real estate.[16] These projects point to the resurgence of an unsustainable speculative land market similar to what occurred from 2007 until the revolution; no measures have been taken to avert another precipitous rise in prices.

In fact, the much-anticipated new investment law—Law 17/2015—ratified by President Abdel Fattah el-Sisi on the eve of the conference continued the process of deregulation, removing the last remaining restrictions on foreign ownership of land and property in Egypt. The new law also allows the government to directly assign, for free, state-owned land to the private sector as part of public-private partnership schemes. Indeed, the minister of housing recently announced that—based on its land ownership—the government will hold a 24 percent equity share in the new capital project.[17]

Besides the knock-on effect these real estate projects will have on property prices, the public-private partnerships represent the government’s increasing interest in encouraging policies that will raise land prices. As the government's largest landowner, NUCA is now also its largest property developer, with an equity share of the profits that stand to be made from joint projects.

The lack of a viable mechanism to pass shares of these profits, and a stake in the overall economic growth generated by these real estate investments, to Egyptians means that affordability will be even further eroded.

Shares from the profits that were supposed to fund the albeit limited and misguided subsidized housing program are at risk.[18] The nascent Social Housing Fund that was recently established to build subsidized housing was supposed to receive revenue from NUCA's budget surplus in addition to a full 1 percent of revenue from NUCA land sales, the two most lucrative sources of revenue for the fund.[19] However, one of these lines of revenue has been cut off and the other vastly reduced. An amendment to the social housing law after the Economic Development Conference deleted the article diverting surplus from NUCA to the fund under the pretext that it would severely affect the state budget.[20] Further, the new public-private partnerships involve no sale of land, thereby eliminating the value that could be diverted to the fund in the form of a tax levied on land sales.

For Egypt's Sustainable Development Strategy to be truly sustainable, it must address the crisis of affordability by both enacting policies that regulate the real estate market and developing a comprehensive and well-funded housing program. Otherwise, the strategy will only ensure the sustainability of informal, inadequate housing for most Egyptians.

[9]     In the absence of any official data on housing prices, the crowd-sourced global index, Numbeo, is used for the sake of comparison. Access the index here: http://www.numbeo.com/property-investment/rankings.jsp.