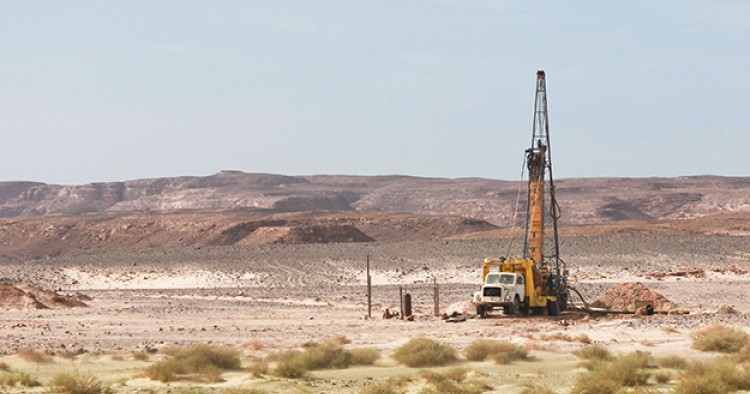 Egypt is not out of the dark, but there is reason to be hopeful. The nation’s energy market reforms and consistent debt repayments have won the attention and approval of international energy companies and investors in the form of significant investment in the Egyptian energy sector. New upstream (exploration and production) oil and gas contracts, a recent increase in renewable energy ventures, and dozens of additional preliminary agreements in both the hydrocarbon and utility sectors are proof of the improved investment climate.

Despite its vast hydrocarbon reserves, Egypt has a history of difficulty in meeting its rising domestic energy demand, a problem exacerbated by the turmoil following the Mubarak regime’s 2011 collapse. The chaos caused a rapid decline in foreign exchange reserves, which inhibited gas import payments, obliging Cairo to shift gas meant for foreign-owned liquefaction facilities to the national market to satisfy domestic demand.[1] As a result, investor-owned natural gas infrastructure sat idle, companies suffered billions of dollars in losses, claims against the Egyptian state mounted, and investor confidence in Egypt faded.

However, aid from Gulf states has helped Egypt to pay billions of dollars of its energy debts. Robust investor response to these debt payments, coupled with strong government statements regarding full creditor compensation and fuel market reforms, may signal that the worst is over for Egypt’s energy crisis.

Despite importing the majority of its hydrocarbon resources, until recently Egypt has provided its citizens some of the world’s lowest fuel prices, at the expense of sound economic policy and the nation’s federal reserves. Yet a five-year fuel subsidy reduction plan introduced in July 2014 will phase out almost all fuel subsidies by 2019 if implemented successfully. Under the plan, the cost of fuel is expected to rise by approximately 20 percent annually until fiscal year (FY) 2018/2019, though the low price of oil represents an opportunity to cut fuel subsidies even earlier.[2]

The subsidy reforms, long avoided by predecessor governments that feared civil unrest in response to higher fuel prices, are fundamental for Egypt’s energy sector and economy. From 2010 to 2014, Egypt spent approximately 5 to 7 percent of nominal GDP on fuel subsidies,[3] and in 2014, energy subsidies accounted for 20 percent of total public spending.[4] Capital spent on subsidies could have instead been used to pay debts, invest in social services or critical infrastructure, or help keep the economy afloat during the tumult that followed the Mubarak regime’s collapse.

The Abdel Fattah el-Sisi administration’s fuel subsidy reduction plan has inspired optimism in the international community. The IMF projects subsidies to account for just 1.2 percent of nominal GDP by FY-end 2015/2016, a roughly 80 percent decrease in subsidies’ share of GDP from the five-year high in 2012/13.[5] 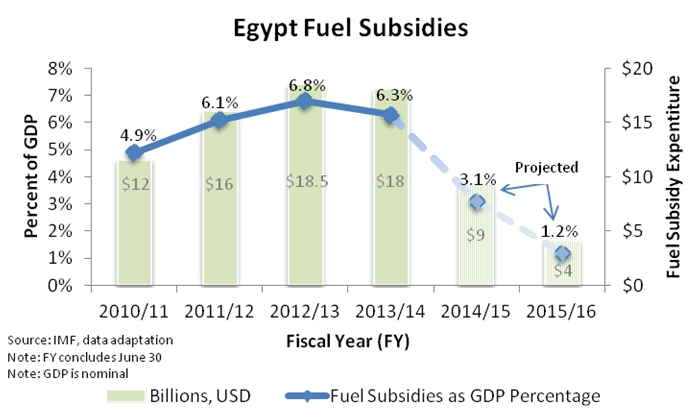 Reflecting the recent reforms, including “fuel subsidy cuts” and reductions of “overdue payments to oil companies,” Fitch Ratings upgraded Egypt’s credit worthiness from a “B-” to a “B” (still below investment grade) in December 2014.[6] Subsidy cuts and repayments to creditors are directly related, since the removal of subsidies frees up capital that the government can instead use to reimburse creditors.

Egypt has reduced its debt to international oil and gas companies by nearly 50 percent since December 2013, when the country owed $6 billion. Creditor firms include British Petroleum, BP Group, and Dana Gas. The nation still faces energy debts totaling $3.1 billion,[7] though the oil minister has pledged to remunerate all company creditors in full by mid-2016.

Egypt has even taken measures to ensure that companies will be remunerated if debts are not paid as planned. According to a Wall Street Journal interview with a top executive of Dana Gas,[8] a UAE-based upstream natural gas firm, Dana could recover its $185 million in outstanding debts if Egypt fails to fulfill its planned payment schedule. If not compensated by 2018, Dana could sell its portion and a government portion of natural gas condensates (a mix of liquid hydrocarbons removed from gas) to the international market, compensating for any residual arrears. Alternative options and inventive insurance policies for creditors to recover debts in full make it easier for these firms to invest in Egypt while awaiting compensation, helping Egypt pay these debts and maintain economic momentum.

Egypt’s reforms have led to an increasingly stable financial environment in which the capital markets, and notably energy investors, are confident. New energy investments range from solar and wind to oil and natural gas. Oil and gas represent more than 90 percent of Egypt’s fuel consumption,[9] and a shortage of gas in recent years has constrained economic development. Upstream oil and gas deals and LNG import arrangements therefore carry the most weight as Egypt seeks to fulfill its imminent energy needs.

Egypt has secured 17 upstream oil and gas contracts since January 2015 and has reached 56 such agreements since November 2013.[10] The investments are worth at least $2.9 billion, with an additional $431 million in signature bonuses to the Egyptian state.

As a result, government confidence is clearly increasing, with Egyptian Oil Minister Sherif Ismail recently affirming in a Reuters interview that Egypt plans to halt gas imports by 2020.[11] Whether or not this is a feasible goal, tough-talk targets will help catch investors’ attention and push Egypt closer to a sustainable and profitable energy market.

In addition to boosting its hydrocarbon supply, Egypt is beginning to attract investments in solar and wind energy.[12] While wind and solar combined made up less than one percent of the nation’s consumed energy in 2013,[13] and while wind and solar are unlikely to significantly underwrite Egyptian energy consumption in the near future, certain investment developments are pointing to real potential for renewables. Egypt already enjoys a reasonably developed renewables industry, producing 10 percent of its power with renewables (mostly hydropower) in 2013. Egypt plans to double this figure and increase overall electricity generation capacity to 60 gigawatts (GW) by 2020, which should help drive renewable investments even further.[14]

In February 2015, the Bahrain-based Terra Sola Group proposed to launch solar projects in Egypt worth $3.5 billion.[15] The company’s CEO maintains that the projects “will assist in the emergence of more than 1,250 small and medium size companies [that] will assume key roles in building a PV [photovoltaic] support industry in Egypt.” He predicts that this initiative will create 50,000 jobs, though it is not clear how many of these would be local or permanent. Dozens of other companies have also expressed interest in Egypt’s solar sector. For example, tens of billions of dollars worth of signed deals and tentative agreements to invest in wind and solar were announced at Egypt’s mid-March economic development conference in Sharm el-Sheikh.

These investments will be complemented by Egyptian legislation passed in 2014 that permits and creates a legal framework for “feed-in tariffs,” which allow customers of residential and commercial classes to generate their own electricity using solar or wind technology and sell the electricity back to the grid, effectively turning electricity users into independent power producers.[16] Feed-in tariff schemes are a sign that the government is serious about capitalizing on its renewable industry.

Given the massive influx of investment planned in Egypt’s energy sector, the current excitement regarding both the sector and the nation’s overall economic future is understandable. The enthusiasm of international investors illustrates the enormous potential of an Egypt that sustainably satisfies the energy needs of its nearly 90 million citizens.

However, just as improved economic policy laid the foundation for the investments making headlines today, the grand energy sector development plans now under discussion will largely depend on successful implementation of legislation and further sound policy making. Only through continued structural reforms, including the resolve to follow through on potentially contentious fuel subsidy cuts, will Egypt meet its target of reducing its budget deficit, which stood at 12.8 percent of GDP in FY 2013/14.[17] Maintaining debt payments to international oil and gas companies is also critical, and improving the country’s precarious security situation is equally important, both to better the lives of Egypt’s citizens and to drive investment. Economic reforms and new investment have reinforced each other in a virtuous cycle, but it remains to be seen whether recent optimism and dynamism will lead to a long-term energy sector and overall economic recovery.