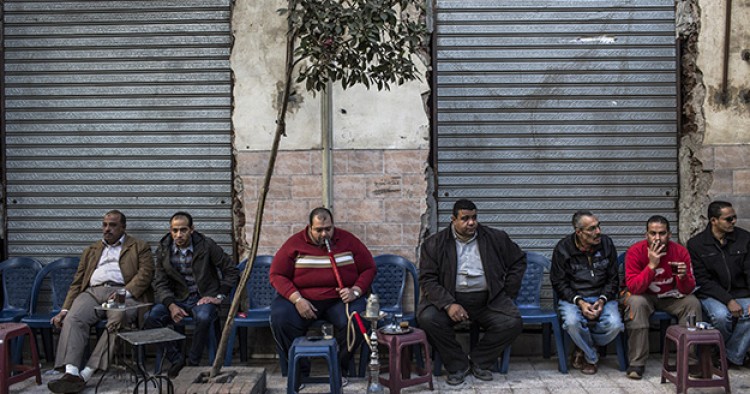 Samy M. has been providing currency exchange services on the black market in Cairo’s hectic neighborhood of Nasr City for nearly a decade. He does this from the crammed office of his other, formal business, which offers real estate services.

“Money exchange has always been lucrative, but it was even busier last year,” he says. With the Egyptian pound weak, hovering at around 6.9 pounds to the dollar on the official market for the past few months, people are drawn to black market rates, which are sometimes as high as 7.20 pounds to the dollar.

Samy says that the need to buy dollars on the black market has also risen, with frequent foreign currency shortages on the formal market and strict regulations on amounts people can purchase. “We might sometimes charge a slightly higher rate than the official one for dollars,” he says.

The black market for currency serves as an apt illustration of the allure of Egypt’s informal economy, generally defined as enterprises that do not pay taxes and are not licensed by the government. Even for a trade as closely regulated by the government as currency exchange, a mirror market with looser rules that is often more advantageous for both buyers and sellers can develop.

There is a general perception that Egypt’s informal economy has been booming since the January 2011 revolution. As the country’s economy continues to falter, the informal sector features ways to supply and procure necessities for less: in addition to currency exchange, one can buy food, clothes, and housing appliances from informal sellers or hire independent carpenters, electricians, plumbers, drivers, and cooks.

Mohamed El Dahshan, an expert on development economics and a professor at Cairo University, says the estimated number of informal jobs in Egypt is around 10 million, with half of those being year-round occupations. Around 85 percent of the small and medium enterprises in the country are thought to be informal.[1] El Dahshan offers several explanations for a plausible increase in activity since 2011. For one, there has been less supervision of pavements and public spaces since the revolution, making it easier for street sellers to set up booths and take over more space to peddle their products.

One of the most visible examples of this phenomenon can be found at the head of Talaat Harb Street, near 26th July Street in downtown Cairo. Shortly after the 18 days of protest in 2011, the area transformed into an informal market mainly for men’s clothes, but also for CDs and posters. It remains so, and on most days the three-lane street is so choked with vendors that there is barely enough room for one lane of cars to pass through.[2]

Under Mubarak’s rule, it is safe to say that police units known as baladeyyat would have forced the sellers to pack up and move under threat of arrest. Most people who spent time in informal sidewalk cafes in Cairo before 2011 remember sudden closures, with panicked staff rushing to pack up plastic chairs, tables, and half-finished drinks, telling customers to leave because the baladeyya were coming.[3]

Other explanations for a boom, according to El Dahshan, are the devastated Egyptian economy and the months-long military curfew, both of which have negatively impacted those earning formal, day-to-day wages in particular. The situation has been worsened by volatile prices, especially for food items.

Egypt’s current economic challenge can be seen as having two fronts, one recent and one deep-seated. On the one hand, the political instability and lack of security of the last two years have hit certain sectors, such as tourism and manufacturing. But the other, long-running and more endemic challenge is inherited from the authoritarian nature of Hosni Mubarak’s regime.

Though the regime claimed economic success in the 2000s in terms of a growing GDP and trickle down effects, the government’s policies did not address the country’s structural socioeconomic problems. In particular, the regime failed to create sufficient jobs or to redistribute economic gains, so this much-advertised economic growth was in fact accompanied not by a trickle down but by a significant worsening of most Egyptians’ livelihoods. As one researcher writes, “Economic reforms were used by the Mubarak regime to redistribute privileges to its intimate associates and co-opt key segments of the business sector, thus allowing it to expand its social basis and consolidate authoritarianism.”[4]

Post-revolution administrations have done little to address these problems. Rather, according to a paper by economic researcher Mohammed Mossallam, they have accelerated the economic decline. Muslim Brotherhood President Mohamed Morsi’s government focused on short-term solutions, such as borrowing from foreign governments and depositing treasury bills in local banks at high interest rates, rather than on “more structural changes such as reforming energy subsidies, developing productive sectors and creating employment.”[5]

The other post-revolution administrative authority has been the military, which keeps the size of its budget under wraps. Estimates of the extent of the military’s economy, described by some as a “state within a state,” range from 5 percent to 40 percent of the national economy. Like informal enterprises, the military also does not pay taxes to the state. Because the military enjoys such privilege, it has little incentive to change the economic system.

It is easy to see how the continuation of a failing economy combined with rising prices and decreased government supervision would lead to more Egyptians trying to make a living in informal sectors.

State and international economic institutions traditionally approach informal economic activity as problematic due to its avoidance of taxes and lack of employee protection. Furthermore, a lack of product regulation and protection for employees has had some disastrous effects. Poisoning of children by badly made candy and the abuse of laborers are just two serious and reported examples.

The last time the government formally held a public discussion about the informal economy was in November 2012, under then Prime Minister Hesham Qandil.[6] The government only offered to make it easier for informal enterprises to register with the state and to not charge them back taxes.

“These aren’t the incentives that are going to get people to register,” El Dahshan says. Rather, he argues that offering health insurance and other forms of social security for employees would prove a more attractive impetus.  But with weak social security institutions and a faltering formal economy, the state simply has no incentives to offer to informal actors in order to encourage them to become mainstream.

In light of all this, an argument can be made for informal economic activities to remain so for the benefit of their entrepreneurs and customers. It is also clear that those who potentially suffer in the informal economy—unprotected employees, consumers of harmful products—cannot be protected by the state until it undertakes serious structural reforms in the mainstream economy. In the meantime, perhaps unionization models and informal checks that can be used as self-regulatory mechanisms could provide ways to temper the worst effects of informal sectors.

West of Cairo, where the pyramids sit, I meet Mohamed A., a 42-year-old man who has been working in tourism for over 16 years. We talk in the office/perfume shop that he uses as a base. Though the shop has a license to sell merchandise, it is in fact used as a hub for a group of independent tour guides like Mohamed who organize visits to the pyramids as well as desert expeditions for tourists.

Mohamed speaks frankly about how bad business has been since January 2011. “I swear, sometimes I can go a whole month without seeing a single customer,” he says. He blames the devastation to the industry on the revolution and the lack of security it has brought, which discourages foreigners from visiting.

I ask him how he is able to provide for his family if business is so bad. “This is embarrassing, but sometimes I go to my mother and ask for a sum of money. We’ve also sold my wife’s jewelry, we’ve sold furniture.” I wonder if he has taken up work in any other industry, or thought about it.

“What would I do?,” he asks. “I’ve done this since I was a very young man; this is the work that I know.” Mohamed’s livelihood, which used to sit poised between the informal and the formal economy, has fallen through the cracks.

A roundabout curves a few hundred meters from the pyramids. Young men, some of them teenagers, stand next to it and throw their bodies in front of approaching cars and taxi cabs in particular, banging their hands on the windows. They are trying to solicit the business of the meager number of tourists in need of a guide to show them around, to take them to the man who rents out camel rides, and to accompany them to shops and restaurants in the area.

I ask Mohamed about these young men. “It is disturbing, I know,” he says. “But do not blame them. They are desperate. They don’t know what else to do.”

[1] This figure dates from before the revolution.

[2] Some view the transformation of Talaat Harb Street as one of empowerment, that is, the traditionally disenfranchised urban poor able to take over public space for their economic gain. Others criticize it for the impact that a lack of regulation has on other people in the space, such as traffic congestion and the sellers’ loud shouts and verbal harassment of female pedestrians.

[3] On January 4, 2013 the Ministry of Interior publicized on its Facebook page renewed attempts to clear public pathways by detaining unlicensed sellers, but it is unclear whether this will be systematic or one of a few erratic bursts of regulation.