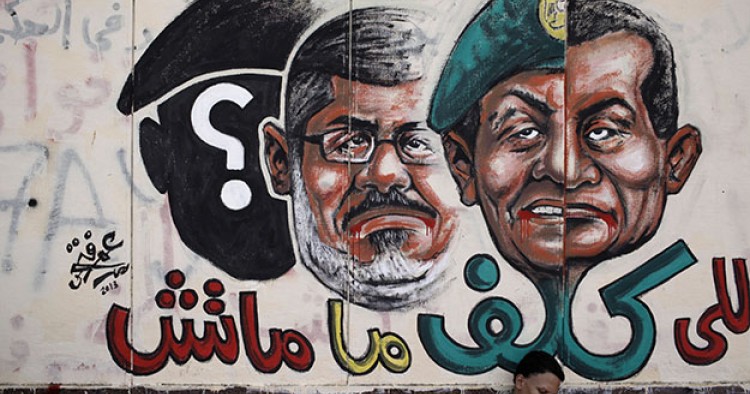 A white bed sheet had been strung between two trees on a median just opposite the Sayeda Aisha mosque in a working class area of Cairo. Everything had been arranged by volunteers under the protection of Ahmed, a well-known personality in the neighborhood. He helped them pick a spot to set up the projector, screen, and speakers. All that was missing was a functioning street lamp to power the equipment, but those nearby had been disconnected. A generator that was usually rented out to street vendors was used instead.

The event begins. People start to gravitate toward the sounds coming out of the large speakers, as images of Mohamed Morsi are projected across the sheet. The people stop, watch, and listen. They hear officials describe something, but then see the opposite of what is being described projected onto the bed sheet. A young boy familiar with the events of the revolution cries as he sees the death of Jika, a seventeen-year-old revolutionary killed in anti-Morsi protests in November 2012. Some are in disbelief, some are angry, some are indifferent.

A man approaches one of the organizers and asks why they are screening in his neighborhood. Ahmed draws near and asks in a no-nonsense tone, “Any problem here?” The citizen recognizes Ahmed and moves away.

People watching the screening organize themselves into groups. The debates begin. The Kazeboon screening has not been attacked: a success.

Kazeboon was founded in December 2011 after military personnel violently attacked protesters at a sit-in outside cabinet headquarters in Cairo. While the military, which was leading Egypt at the time, issued statements that downplayed its role in the brutality, an iconic video showed soldiers dragging, beating unconscious, and stripping a woman while kicking another woman in the head. The military’s false statements juxtaposed with the existence of the video prompted the creation of the “Kazeboon,” or “Liars,” campaign. With Morsi’s presidential win and the rise of the Muslim Brotherhood, Kazeboon began to expose the lies of the new government as well. Now, with Morsi deposed and another government in place, Kazeboon has more narrative to counter. With the role of the military uncertain, depending on who steps to the forefront of government Kazeboon’s targets may include new faces but may very well return to the generals.

Kazeboon often combines footage of crimes committed by the regime with audio of statements made by a government figure or spokesperson that denies or offers a skewed narrative of the events being shown. Video and audio are usually collected from YouTube clips that have been uploaded by activists.

Segments can thus have a format in which viewers are confronted with contradictory images and sound. Sally Toma, a founder of the campaign, developed this format, noting that “the contradiction creates doubt, which leads to searching for the truth.” She adds that background music is also used, from classical to heart-wrenching Arabic violin compositions, “to capture the audience’s attention and emotions and to overcome the noise of the streets.”

Kazeboon films are made available for download from the Internet and are then shown in various cities across Egypt by projecting images on the white bed sheets, as described above, or on a screen or building. Independent activists, movements, political parties, or popular committees from a neighborhood organize and execute the screenings, which may also be accompanied by marches or group graffiti spraying.

Kazeboon came to life in part as a reaction to the fact that press conferences held by activists to counter the military’s narrative were not enough to shift public opinion.

“There was no shortage of footage, but it wasn’t reaching people,” says Toma. “We had to bring the revolution back to the people.”

When online dissemination also proved not to be effective enough to change public opinion, the idea was hatched to reach people by utilizing public space as a medium of political expression and information dissemination.

The campaign’s first event was held on 20 December 2011 inside el-Sawy Culture Wheel, a cultural center in Zamalek. It screened footage to counter a narrative presented by the Supreme Council of the Armed Forces (SCAF) and then prime minister Kamal Ganzouri, which absolved the military of any wrongdoing during a demonstration and claimed that protestors had set fire to public property. Both SCAF and Ganzouri also claimed that the army did not use firearms against protesters. Video evidence showed clearly that the military had used firearms and, indeed, extreme brutality against civilians. It also showed protesters putting out fires and trying to salvage books from a burning building containing historic manuscripts.

Screening outside has proved challenging. Finding the right spot in narrow crowded streets to place the equipment and locating a good source of electricity is not a straightforward task. Funding has also at times been difficult to secure, as owning or renting equipment is costly and runs the risk of being damaged.

Indeed, the streets of Egypt began to turn hostile toward revolutionaries once the military took charge. The army is revered and people are not exposed to the reality of its crimes.[1] While public space around Tahrir Square and other protest areas was relatively easy to revisit, the streets in other parts of Cairo and Egypt remained to be conquered. As the regime tried to regain control of city space, it occasionally sent thugs to disrupt screenings and destroy equipment. Volunteers and participants of these screenings were in physical danger, either from these thugs, security forces, citizens overly zealous about their support for the army, or, more recently, supporters of the Muslim Brotherhood.[2] On a few occasions screenings were cancelled.

The disrupters would first raise their voices and speak loudly about “vandals who don't want stability in Egypt,” says Ahmed Fouad, an active member from the original Kazeboon team. They would then try to physically fight with the organizers or even the audience. In some instances they pelted the events with rocks, sometimes causing damage to equipment. The campaign team learned from these early clashes to mobilize a larger number of people in order to remain safe.

But the greatest challenge remained to convince the people that the rulers were liars.

Despite the numerous challenges, the campaign met with success, in part due to the fact that it is a decentralized project that provides a revolutionary framework for people to unite despite ideological differences and without the need for a political entity.

Over 10,000 volunteers have screened videos in almost all governorates of Egypt and in at least eight other countries, including the United States, France, Sweden, and England. Screenings were also held in daring spots, such as in front of the Ministry of Defense, the Ministry of Culture, the Maspero television building, the journalist syndicate, the high court, the walls of the Egyptian embassy in Washington, D.C., and even the presidential palace. With at least 600 documented screenings over Egypt (Fouad estimates that 40 percent of screenings are not even registered) with sometimes over 20 screenings per day, Kazeboon helped mobilize masses and spurred chants of “Down with military rule.”

As a result, Kazeboon rattled the ruling generals. Field Marshall Mohamed Hussein Tantawi, defense minister at the time, alluded to the campaign when he spoke of “rumors” being spread about the military in a speech to cadets in late January 2012.[3] SCAF also accused  American University in Cairo students of being tools of the U.S. government, citing a Kazeboon screening held on campus as one of the reasons for the accusation.[4]

In addition, SCAF sent a message to all media demanding that no member of the campaign was to be interviewed on television.

“A lot of channels would not host me when they found out I was going to talk about Kazeboon,” confirms Toma.

Dina Abdel Rahman, a television presenter, defied the order by broadcasting an entire episode on Kazeboon on the Tahrir channel in early January 2012, which included footage used by the campaign.[5] Many speculated that this was the main reason that her contract with the channel was terminated shortly thereafter.

SCAF also launched its own campaign in reaction to Kazeboon, called “Sadeqoon,” or “Truth-tellers,” but it failed to garner enough interest and quickly died off.

In July 2012, Kazeboon launched “Kazeboon‑‑Sarqin Aishna” (“Liars‑‑They’re Stealing Our Bread”), which aimed to create a discourse over the absence of social justice despite a year and a half of revolution. The idea was to push leaders, irrespective of their affiliation, to address rights such as health care, food, and housing. The campaign screened videos in the governorates, since a great many of the grievances came from them. But compelling events, such as the Syrian embassy protests in September, in which twelve protestors were arrested despite Morsi’s repeated condemnations of Syrian government forces, shifted focus to Muslim Brotherhood rule.

On 19 December 2012 Kazeboon activists relaunched the campaign under the slogan, “Kazeboon bi-Ism al-Din,” or “Liars in the Name of Religion.”[6]  The relaunch occurred after clashes in which Muslim Brotherhood members forcefully dispersed a peaceful sit-in outside the presidential palace. In later clashes, Brotherhood supporters tortured protesters, and the Morsi-appointed public prosecutor applied pressure to lock up innocents without evidence.

The new campaign, which began offering a mixture of mainstream media and YouTube clips, held close to 100 screenings across Egypt before the end of January 2013. The decrease in the number of screenings was a result of the mainstream media being more open to criticizing the Brotherhood than the military. Under Morsi, Kazeboon not only exposed responses to violent events, but pointed to shifting positions and broken promises. An example that consistently elicits laughter is one in which Morsi states explicitly that he worked for NASA and, in the following clip, denies that he ever claimed such an affiliation.

Another decentralized movement, called “Tamarod,” or “Rebel,” sprang to action in May 2013. It collected over 22 million signatures calling for early presidential elections to provide the opportunity to oust Morsi.  Kazeboon was quick to adopt the campaign and utilize its network of volunteers to screen under the slogan, “Tamarod li-annahum Kazeboon,” or “Rebel because They’re Liars.” The joint events screened the president’s lies while the Tamarod campaign collected signatures.

Kazeboon views the events that started on 25 January 2011 as a revolution and the events of 30 June 2013 as a continuation of that revolution. Kazeboon will continue to counter the regime's narrative when it distorts the facts, irrespective of who is in power.

Now that Morsi has been deposed by the military, Kazeboon is exposing lies and violations on different sides. It is preparing to take on whatever remains of the “liars in the name of religion,” such as the Nour party, along with the state apparatus that continues its brutality, impunity, and flawed narrative.