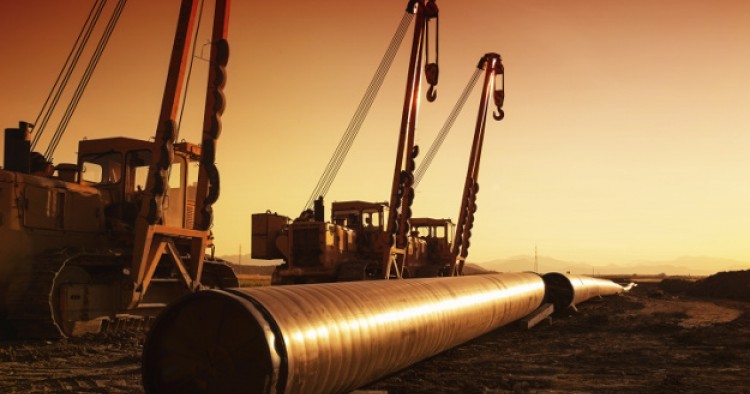 A proposed deal to export Israeli natural gas through Egypt has the potential to enable Israel’s entry into its first major export markets, help Egypt escape a deepening energy crisis, and welcome the first European players into Israel’s natural gas industry. However, the deal is complicated by political realities and a history of deeply rooted grievances between the two countries, made worse by the recent violence between Israel and Hamas in Gaza.

On May 5, 2014, Texas-based Noble Energy, which claims a 36 percent stake in Israel’s Tamar gas field, announced a non-binding letter of intent between the consortium of Tamar field partners and Spanish-Italian energy giant Union Fenosa Gas (UFG). The letter of intent proposes that Israel’s Tamar field supply 2.5 trillion cubic feet of natural gas over a 15-year period to an existing natural gas liquefaction plant in Damietta, Egypt. The deal could be worth up to $20 billion.[1]

The Damietta plant is owned by the Spanish Egyptian Gas Company, in which UFG has an 80 percent stake, with Egyptian national energy companies claiming the remaining 20 percent.[2] Strategically located on Egypt’s Mediterranean coast near the Suez Canal, the Damietta plant provides convenient access to export markets in Europe and Asia, where natural gas fetches higher prices than in the Levant region.

While Egypt boasts vast natural gas reserves, the nation has been plagued by power cuts, fuel shortages, and blackouts due to unsustainable subsidies, escalating domestic demand, halted gas exploration, and overall mismanagement. In December 2012, Egypt ceased shipment of its natural gas to the Damietta plant for liquefaction and export, in order to retain a larger share of its gas for domestic consumption.[3] UFG subsequently filed a complaint with the International Chamber of Commerce (ICC) alleging breach of contract and seeking $6 billion in damages. [4] Israeli gas may present a solution to Egypt’s difficulty in meeting its liquefied natural gas (LNG) obligations.

The companies involved aim to finalize the contract within six months of its announcement, yet defining details will be tricky. The agreement is subject to Israeli and Egyptian regulatory approvals. The Egyptian Ministry of Petroleum maintains that it will not sanction the deal until the "resolution of all pending trade arbitration cases," alluding to UFG’s complaint, and East Mediterranean Gas’ (EMG) unrelated claim against the Egyptian state in the ICC.[5] EMG is seeking $8 billion in damages for Egypt’s abrupt termination of a deal in which Egypt supplied Israel with up to 40 percent of its natural gas needs.[6]

Other obstacles lay ahead as well. Transport plans to send gas from Israel’s Tamar field to Egypt’s Damietta plant are tentative. Fresh memories of attacks on Egyptian gas pipelines, which once delivered gas to Israel, serve as a cautionary reminder of instability and the government’s incapacity to safeguard essential energy infrastructure. With anti-Israeli sentiment in Egypt strong, and political turmoil rife, it may be difficult to gain popular support for the deal on both sides of the border. Nevertheless, the opportunity for cooperation and mutual gain is enormous.

Despite claiming the third largest proven natural gas reserves in Africa, Egypt’s energy industry is facing a major crisis.[7] While much of this crisis stems from imprudent subsidies and failure to meet rising domestic energy demand for a growing population of 85 million, it is also rooted in debt. Egypt’s $5.9 billion owed to foreign energy companies is largely a result of rerouting natural gas to satisfy domestic needs, rather than complying with contracts to sell to international energy companies for export.[8] 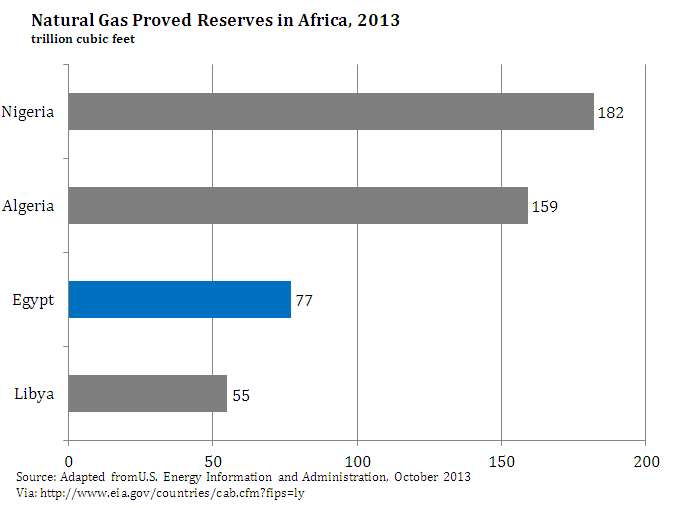 Efforts to increase gas supply, reduce debt and regain investor confidence – including the endorsement of 32 oil and gas exploration agreements since October 2013 - have proved negligible at best.[9] Egypt has decreased its debt to foreign energy companies by less than 2 percent over the last year.[10]

While the majority of its $5.9 billion debt is owed to British Petroleum and BG Group, Egypt stands to benefit from reviving the Damietta plant with Israeli natural gas. Through the deal, it could avoid a potentially highly publicized multibillion-dollar arbitration case in the ICC with UFG. Such a case could damage investor confidence in the Egyptian energy sector, produce an unfavorable ruling for the Egyptian state, and embarrass the nation on the world stage. Alternatively, the amicable resolution of the case would be a clear signal to investors and the international community that Egypt is serious about maximizing opportunities and collaborating to resolve commercial disputes.

Exploiting mutually beneficial, common sense opportunities to ease Egypt’s energy crunch is complicated by political realities, recent history, and public opinion in Egypt. In June 2005, Egypt and Israel agreed to a 15-year deal, worth $2.5 billion, involving Egypt’s annual export of 1.7 billion cubic meters of natural gas to Israel.[11] The deal was hailed as a breakthrough in Egypt-Israeli relations, partly because it was thought to fortify the 1979 peace treaty between the two nations.[12]  Yet the arrangement became increasingly unpopular in Egypt due to allegations that then-president Hosni Mubarak and his cronies were underpricing natural gas sold to Israel (and other nations) to earn billions of dollars in kickbacks.

Israel paid $1.50 per million British Thermal Units (BTU) for Egyptian natural gas in 2008, and despite increasing this fee to $3 - $4 per million BTU the following year after public backlash in Egypt, it remained vastly underpriced. In comparable regional deals during the same time period, Turkey, Italy and Greece paid $7 - $10 per million BTU.[13] As a result of poor negotiation and corruption, Egypt lost billions of dollars in natural gas deals with Israel and other foreign nations. 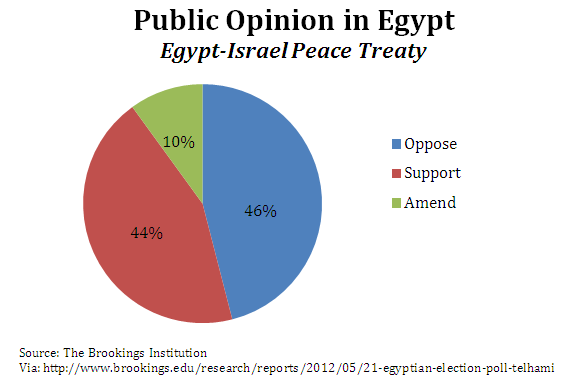 With pro-Palestinian sentiment strong in Egypt, and historical grievances deeply rooted, the country’s complications with Israel extend beyond natural gas. Illustrated through recurrent anti-Israel protests in Cairo, and acts of aggression including a ransacking of the Israeli embassy in Cairo in 2011, anti-Israeli sentiment among the Egyptian populace is a challenge for an Egyptian government seeking to meet its LNG obligations with Israeli natural gas.[14]

The current Hamas-Israel conflict may reinforce anti-Israeli attitudes in Egypt, particularly as Palestinian civilian deaths will likely increase during Israel’s ground operation in the Gaza Strip. The letter of intent, however, proposes that Israeli gas will merely pass through Egypt (presumably without entering its domestic market), which may provide the Egyptian government with political cover.

While Egyptians may be wary of supporting Israel’s natural gas export ambitions, they currently face a severe energy shortage and rising demand, which has translated into daily blackouts, long queues for fuel, and approximately $20 billion in debt and claims against the Egyptian state.[15] Aggravating the situation further, Egypt retains just $16 billion in currency reserves, a $20 billion decrease from 2011.[16]

Resolving a $6 billion claim against the Egyptian state with Israeli natural gas makes great practical and business sense. Yet it is a complex issue for Egypt, both politically and in terms of public opinion.[18] While the Egyptian Ministry of Petroleum maintains that it will not authorize the deal until all pending arbitration cases are settled, the two lawsuits against Egypt are independent of one another and involve different stakeholders. Entangling the two cases could complicate Egypt’s efforts to resolve either one.

Much of the Egyptian populace likely loathes the prospect of one day importing Israeli natural gas for domestic consumption, and may view the deal described in the letter of intent as an unwelcome antecedent to such an arrangement. Feelings of bitterness are not unreasonable. The Israeli economy benefited at Egypt’s expense while powering Tel Aviv with low-cost Egyptian gas. If Israel were to export its gas to Egypt for domestic consumption, it may cost multiples of what Israel once paid for Egypt’s gas. Accepting large quantities of Israeli natural gas, and allowing this gas to become central to Egypt’s economy could also be deemed as creating an unacceptable dependence on Israel.[19] Egyptians likely want to avoid a Putinesque situation in which Israel uses its natural gas as a geopolitical tool.

While Israel is a convenient scapegoat, the Egyptian political and business elite was fundamental in Egypt’s lost natural gas revenue and the mismanagement of its natural resources. Reviving the Damietta plant would be an excellent first step for Egypt to recover from the country’s unsustainable situation.

Transforming the letter of intent into a formal agreement will require political will among all stakeholders. Egyptians would have to come to terms with allowing Israeli gas to transit their country. Israelis would need to recognize the risks of entering into a significant commercial agreement with a politically unstable, potentially hostile nation. Whether to utilize the existing pipeline that once shipped Egypt’s gas to Israel and was attacked 15 times after the 2011 uprisings or to build a new, potentially safer subsea pipeline to transport the gas remains a key question. If all parties agree on its terms, the deal will likely generate mutual benefits, and represent another crucial building block in the region’s new energy order.

[9] “Signing a New Agreement for Oil and Gas Exploration in the Eastern Desert,” Arab Republic of Egypt Ministry of Petroleum, 28 May 2014, http://www.petroleum.gov.eg/en/MediaCenter/LocalNews/pages/mop_28052014_1.aspx