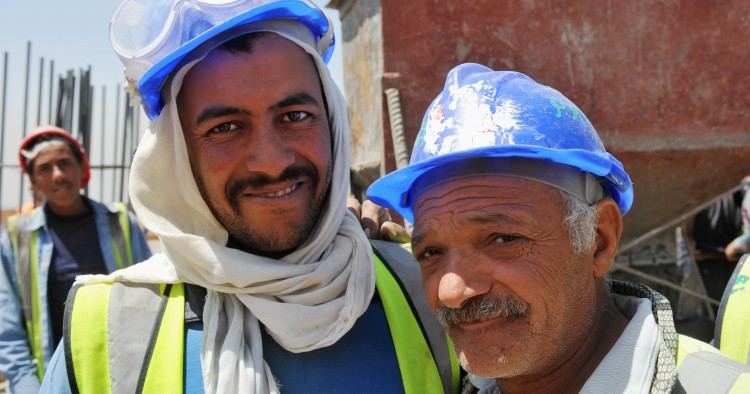 Egyptian migration to Europe started in the early 19th century, following Napoleon’s campaign in Egypt (1798-1801). At that time, Muhammad ‘Ali, the founder of modern Egypt, sent the first Egyptian mission to Italy in 1813 to study printing arts, and another mission to France in 1818 to study military and maritime sciences in order to establish a modern Egyptian Army based on European standards of that time. Since then, there has been a channel of communication between Egypt and Europe. Europeans used to migrate to Egypt, where they formed successful minorities in Alexandria and Cairo until the early 1950s.[1] The economic pressures and transition to socialism during the Nasser era led many European Egyptians to return to Europe. In addition, Egyptians started to migrate to the West in the 1960s. Currently, successful Egyptians live in most of the large metropolitan areas of Europe.

From the beginning of the 1960s, political, economic, and social developments led some Egyptians to migrate permanently to North America and Europe. According to the Egyptian Ministry of Manpower and Emigration’s estimates, the total number of Egyptian migrants in non-Arab countries is about 1.7 million (2008 estimates). More than 90% of them are concentrated in seven countries: the United States and Canada (780,000), the United Kingdom (250,000), Italy (190,000), France (160,000), Australia (80,000), and Greece (80,000). The total number of Egyptians in Europe is about 790,000. The statistics given by the Ministry of Manpower and Emigration are just estimates drawn from the reports of Egyptian embassies abroad, records of cross-border flows from the Ministry of Interior, emigration permits from the Ministry of Manpower and Emigration, and other sources.

Egyptians in the West are perceived to be more educated than migrants to the Arab Gulf countries. They include Egyptians who were sent by the Egyptian government to study abroad, many of whom preferred to remain in their country of destination to teach and pursue research. They also include a successful cadre of businessmen.

Irregular Migration of Egyptians to Europe

The current stream of Egyptian irregular migration to Europe started on the eve of the 21st century with thousands of fresh graduates and poorly educated unemployed youth engaged in irregular migration to Europe either through the Mediterranean Sea via Libya or by over-staying Schengen tourist visas. There are four main reasons for this new type of migration: 1) high unemployment rates among Egyptian youth, 2) the difficulty that these youths face in obtaining work in the Gulf Cooperation Council (GCC) countries due to competition from low-wage Southeast Asian labor migrants, 3) the geographical proximity between Egypt and Europe, and 4) the ease of travelling to Libya, where most of the journeys to Europe by boat originate.

According to a survey carried out in Egypt in 1996 as part of a European Commission study,[2] for Egyptian non-migrants and return migrants who intended to migrate, Saudi Arabia was still the favorite destination (40%), compared to only 6% who preferred to migrate to any European country. However, a recent survey carried out by the European Training Foundation (ETF)[3] indicates a shift in the preferred destination of Egyptian youth towards migration to Europe. Over 33% of those surveyed who expressed their desire to migrate prefer to migrate to any European country, compared to 61.9% who expressed their desire to migrate to any Arab country.

Characteristics of the Current Migration Stream to Europe

A field survey was carried out in 2006[4] to identify the push factors in Egypt as identified by past and potential migrants. The results of this survey indicate that push factors in the country of origin (Egypt) are overwhelmingly economic. Egyptian youth regard migration — regular or irregular — as a possible way to escape poverty and unemployment. The study indicates that the main reasons behind migration are the low wages and salaries in Egypt compared to European salaries, bad living conditions, and the lack of job opportunities in Egypt, especially among recent graduates. At the time of the fieldwork, about 40% of the interviewees were not engaged in any work for cash.

The choice of destination country in Europe is not a freely made decision; it is closely related to the migration networks and linkages between origin and destination. Migration networks that stimulate migration flows between Egypt and Europe are completely different from migration networks between Egypt and Arab Gulf countries. The migration of Egyptian youth to Europe is managed and activated by kinship and family ties. On the other hand, the migration of Egyptians to Arab Gulf countries is usually managed by a set of regulations, certified migration brokers, and many other conditions. Migration to Europe is concentrated in a set of Egyptian villages in specific governorates; each village has its own destination. The two major destinations are Italy and France. Thus, one may say confidently that migration to these two destinations occurs in a closed market where new entrants come from the same village or group of adjacent villages. For example, a single village in the Fayoum governorate specializes in sending migrants to Italy, while another village in the Gharbiya governorate sends migrants to France. Additionally, some villages in the Nile Delta shifted their migration directions from the Arab Gulf countries to Italy. Youth in these villages claim that migration to the Arab Gulf countries is not beneficial like before and “working for one year in Italy is better than working ten years in the Gulf.” The migrant population to Italy from these villages is increasing, and youth compete to find a way to migrate, legally or illegally.

Another important factor that plays a major role in stimulating migration streams to Europe is the wealth of successful migrants and return migrants. Remittances of Egyptian migrants who work in European countries are important factors that stimulate a continuous stream of migration. Potential migrants claim that ordinary workers can save an average amount of 6,000 euros per annum while working abroad (about 50,000 Egyptian Pounds). Potential migrants claim that the “savings of one year of work in Europe is more than a lifetime salary in Egypt.” Building luxurious houses in rural Egypt, marriages, and the consumerist behavior of returnees are strong factors that attract the young men to migrate. When youth weigh the risks of illegal migration against the expected returns, they prefer to take the risk for what they assume will be a better life.

The results of the study indicate that the vast majority of youth who want to migrate to Europe intend to return to Egypt after a temporary stay abroad. Despite the fact that the legal framework for migrants to the Arab Gulf countries is very different than the legal framework for migrants to European countries, these findings suggest that Egyptian migration to Europe is a re-production of the Egyptian migration pattern to the Arab Gulf countries, where young males migrate to achieve specific financial goals and then return to Egypt.

Building on the experiences of the current stream of Egyptian youth migration to Europe, some policy recommendations may emerge. Since low income and unemployment are the main push factors that affect migration, and in order to decrease unemployment rates, the government of Egypt should create new job opportunities in the local market through attracting foreign direct investment and the private sector. This should go hand in hand with an emigration-oriented policy and the opening of new markets for the Egyptian labor force. Bilateral agreements between Egypt and European countries regarding labor mobility are important. The quota for Egyptian migrant workers should be negotiated with receiving countries in Europe.

Egypt should make creating new jobs an economic priority in order to reduce irregular migration to Europe. If a sufficient number of job opportunities are not created in Egypt, a great proportion of the surplus of the Egyptian labor force will be channelled — regularly or irregularly — to labor markets abroad. Given the saturation of the labor market in the Arab Gulf countries and the increasing competition that Egyptian laborers face in the Gulf (due to the increasing number of Southeast Asian migrants in the region), the most feasible destination for Egyptian migrants is Europe. Regulating Egyptian migration to Europe should be one of the priorities of the Egyptian government. In addition, job matching schemes and pre-departure training of migrants should be considered.

[2]. Eurostat, “Push and Pull Factors of International Migration — A Comparative Report,” Eurostat and The European Commission, 2000.