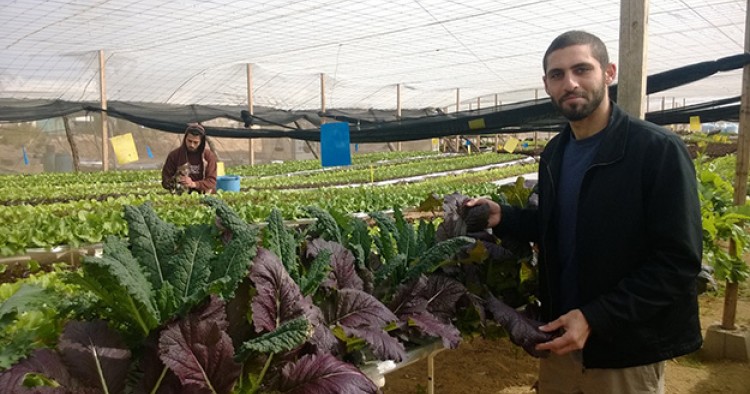 The Egyptian revolutionary motto, “bread, freedom, social justice,” which echoed over 18 days until Hosni Mubarak's ouster on February 11, 2011, illustrated how restricted access to food had become one of the people's main grievances. In the aftermath of the revolution, infused by a renewed sense of ownership of their country, many citizens launched environmental initiatives with a focus on sustainable agriculture.

Egypt's agricultural landscape only comprises five to seven percent of the total area of the country and is limited to the Nile River and its narrow valley and northern Delta, with other green pockets in the oases and on the northwestern coast, which has more frequent rainfall. The rest is desert—rocky, sandy, parched land unable to blossom with conventional farming techniques. Another issue is that cities like Cairo have spread cement tentacles over what used to be extremely viable agricultural land and have replaced it with brick towers.

And, while a third of Egypt's annual share of the Nile is used for irrigation, it is loaded with pollutants and pesticides from upstream countries and from Egypt itself, which is notorious for excessive pesticide use. Since chemical pesticides were first introduced to Egypt in the early 1950s, a million metric tons have been released into the environment, polluting the water and depleting the soil's quality.

Two farmers, Faris Farrag and Amr Bassiouny, launched sustainable agriculture ventures soon after the revolution to cultivate high-end produce with minimal and clean water consumption. “We had a revolution, we were tear gassed, shot at, and here I am scraping the dirt,” says Farrag, owner of Bustan Aquaponics, Egypt's first aquaponics farm. Olive trees line his seven-acre parcel of land located on the outskirts of Cairo, and right in the middle lies a deep water culture system. Long hydroponic beds holding different varieties of organic lettuce, herbs, and vines are connected to four massive fish tanks. Each tank contains about a thousand tilapia fish, which are native to Egypt and are known for resisting slight water pH and temperature variations.

“Instead of soaking the plants' roots in a nutrient solution,” says Farrag, “the fish tanks provide 90 percent of the nutrients plants need to grow.” The ammonia that results from the fish breathing is naturally transformed into nitrogen and absorbed by the plants before being sent back to the fish tanks, ammonia-free and healthy. “In a fish operation that is not integrated into a hydroponics system, ammonia levels in the tanks will spike and poison the fish,” Farrag explains.

Just outside the fish tanks lies a large pond covered with a slimy layer of duckweed, a highly nutritious floating plant that is regularly scraped, dried, and fed to the fish as vegetable protein. The nutritious water from the pond is then used to water the olive trees that produce a high quality olive oil. This organic and closed system mimics natural processes and enables waste to be efficiently reused.

Compared to conventional growing practices, hydroponics save 95 percent the amount of water and make lettuce grow 20 percent faster. Farrag’s integrated system uses only 500 cubic meters of water yearly to produce five to seven tons of fish and tens of thousands of lettuce heads, which is the main reason why Farrag opted for it. “I am very concerned with water conservation, because we live in the desert and have a dual problem of water quantity and quality,” he says. “I also want to morally prove a point.” Farrag plans to add three extra aquaponic units to make the farm more economically viable, and in the long run he envisions creating a permaculture system by introducing chickens that would feed on compost and produce natural fertilizers for the soil.

A few miles away from Bustan farm lies Amr Bassiouny and Adel el-Shentenawy's small-scale hydroponic farm that grows nine varieties of lettuce and seven different herbs. Butterhead, iceberg, batavia, kale, red and green oakleaf, parsley, thyme, Italian mint, basil, and other leafy greens adorn Bassiouny's 74 hydroponic tables that spread on one feddan, which is the equivalent of 4,200 square meters. Bassiouny designed his own version of the Nutrient Film Technique (NFT), a system that circulates a shallow stream of water filled with dissolved plants’ nutrients in a channel past the plants' bare roots. Relying only on locally sourced materials, he used half-cut pipes for the gully and covered them with insulation foam films.

“I could not find a suitable piece of arable land to buy, and ended up renting a feddan of barren land that could not be grown in a traditional way,” Bassiouny says. Indeed, right under the sandy soil lies a layer of rock so hard that any digging is impossible. Despite these challenges, growing lettuce and herbs in elevated pipes in a closed water system can be accomplished, as he has been proving since November 2012. “No matter how barren the land, I can create life out of it,” he says, adding that he hopes this system will be replicated in the Sinai desert, where he initially thought of developing his sustainable venture.

Bassiouny produces around 600 heads of lettuce daily that he sells in high-end grocery stores, restaurants, and at the weekly farmer’s market in Cairo, where Farrag also sells his produce. For pest control, they both rely on wasps and ladybirds that eat a variety of pests. In terms of employment possibilities, hydroponic and aquaponic systems require a larger number of maintenance workers than a typical farm. “In Egypt there will be one, maximum two farmers working on a feddan of land, but systems like ours need a larger staff,” says Bassiouny, who employs 10 workers.

Ventures are also underway to make such farming techniques available to individuals and more affordable. Ziad Abou el-Nasr, a sustainable agriculture consultant, is working on small hydroponic and aquaponic home units for rooftops, balconies, and kitchens. “Vertical farming's perk is that you can grow a good quantity of fresh produce in a small space since it's leveled,” he says. He has developed systems that can be used anywhere, including a small indoor herb system that comes with grow lights to compensate for a lack of naturally occurring light. “The prototype I am currently working on will consist of one meter square trays superposed on one another that can hold up to 40 plants,” he explains, stressing that this system can be upgraded to an aquaponic one with the bottom tray used as a fish tank. He adds that a growing number of farms are interested in hydroponic systems as a way to grow healthier products for export. Vertical and rooftop farming, in light of the country's serious water and food crisis, is also an effective way to grow organic food while cutting on transportation costs, emissions, and waste. Abou el-Nasr explains that the transportation system in Egypt is flawed, with typically 30 percent of produce lost in transit. Fresh food is piled in crates on the back of trucks, where the sun damages part of it and causes some of the food to perish while it makes its way from Upper Egypt to Cairo.

The word appears to be spreading in regard to these sustainable techniques, and one initiative has been particularly key in getting the message out. Nawaya, which means “seed,” “nucleus,” and “intention” in Arabic, is a learning network that applies good practices in the fields of sustainable land use, agriculture, waste, and wastewater management by organizing workshops and trainings courses for farmers. “Nawaya has been wanting to set up an apprenticeship for the past two years and we finally received the financing,” says Betty Khoury, one of the organization’s members.

Through this new project, 20 farmers from the area of Abusir, located to the west of Cairo, will be trained on every step of the supply chain, from growing to selling. In the second phase of the project, each of the farmers will train ten apprentices, with the goal of creating jobs for youths while enhancing organic farming practices.

Organic and sustainable farming, whether medium or small scale, has taken root in Egypt since the revolution. But there is still a long way to go until Cairo's trash-littered rooftops turn into lush food gardens, and until the government helps small farmers grow high-quality produce, a luxury mostly granted to large agribusinesses that export most of their produce, the practice will remain limited in size and the products available mainly to those Egyptians with the means to purchase them at higher prices.

But the empowerment of youth in the days and months that followed the demise of Mubarak has not waned, and, as Abou el-Nasr puts it, “The revolution gave us all a big boost, and since many people lost their jobs, they started chasing their dreams.” These dreams have translated into social initiatives that benefit the field of agriculture.