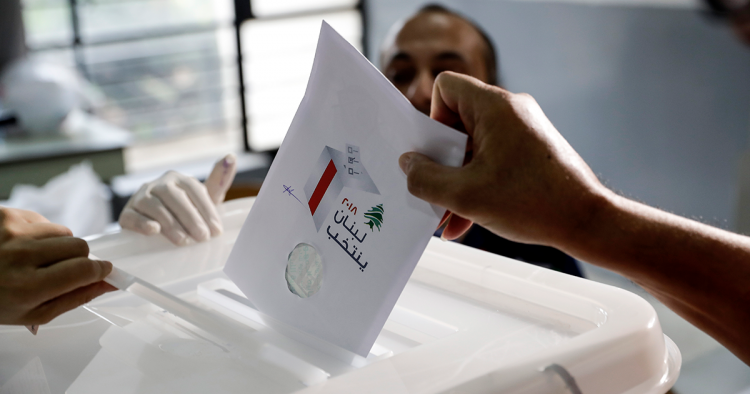 With the increasingly heavy burdens of everyday life, May 2022 may feel like an eternity away in Lebanon. Next spring, however, marks a high-stakes milestone and reality check for the country’s domestic politics.

Absent any major surprises, eligible Lebanese citizens at home and in the diaspora will cast their votes in the first general elections since the October 2019 uprising, the financial collapse, and the Beirut port explosion. In fact, the process has already started with the issuance of electoral rolls.

But there’s a catch — Lebanese politics are full of surprises.

Parliamentary elections are supposed to take place every four years. Nevertheless, in 2013 the parliament at the time self-extended its elapsed mandate by 16 months, citing “security concerns” and, more implicitly, an inability to agree on a new electoral law as underlying reasons. Over the following five years, it did so again twice.

Today, signaling that the 2022 elections may not happen as scheduled has already begun behind closed doors and in Lebanese media outlets. The primary danger of the delayed elections rhetoric lies in its self-fulfilling tendency.

In light of the country’s many crises, the international community should pay close attention to how this saga develops. As Lebanon’s partners and friends contemplate unlocking foreign aid, complementing reform conditionality with explicit and actionable commitments to transparent and timely elections may be essential.

The peculiar urgency of the upcoming elections

An extension of the Lebanese parliament’s term past May 2022 could have significant political ramifications beyond the serious violation of democratic processes.

As it stands, Hezbollah and its two main allies — the Amal Movement and the Free Patriotic Movement (FPM) — hold a parliamentary majority. Leading figures in all three parties have been sanctioned, most recently under the Global Magnitsky Act. Elections may or may not disrupt this majority rule, but a term extension would certainly cement and expand the level of influence that Hezbollah and its allies have over the remnants of Lebanese political and economic life.

2022 is also a presidential election year. The six-year term of the current president and former FPM leader, Michel Aoun, expires in November, half a year after the hypothetical inauguration of a new parliament. Voices in Mr. Aoun’s bloc — once a pariah for rejecting parliamentary term extensions — are already rationalizing a prolonged tenure. Regardless, the absence of general elections might spill over to the presidential cycle, hence allowing an illegitimate parliament to elect — or more likely inhibit (à la 2016) the election of — the next president.

The other side of the Lebanese political aisle is no less concerned. Timely elections would also be an opportunity to unsettle the historically pro-Western but equally incompetent and complicit minority, most notably the now-fragmented triple alliance between the Future Movement, the Progressive Socialist Party, and the Lebanese Forces. Over the years, and in line with the notorious Lebanese model of consensual democracy, these parties have played ball with the current majority and indulged as handsomely in spoils-sharing and corruption.

Finally, and perhaps more importantly, fair, transparent, and timely elections would provide civil society and alternative parties with the first post-uprising opportunity to secure political representation. Expectations are level-headed and elections are by no means an end goal, but the ballot box remains the most important signaling device in Lebanese politics.

Answering a question during his post-port explosion trip to Beirut on why he keeps meeting the corrupt political class, French President Emmanuel Macron rightly interjected: “Who else do you want me to meet? You have elected them.” This perception of a Lebanese self-inflicted fate seems to be common in Washington as well.

Nevertheless, the post-October 2019 era, with its popular awakening, widespread destruction, and financial collapse, is very different from what came before it. One can tell by walking down the streets of Beirut and other large cities and talking to physically and emotionally scarred citizens. Absent elections to translate the pent-up popular resentment, anger, and demands into representation, a viable path forward for real political change — and more constructive and trustworthy partnerships with the international community — remains obstructed.

That path may not save Lebanon, but its citizens deserve the chance to walk it.

New parliamentary developments have recently thrust the conversation around elections into the limelight. Out of Lebanon’s 128 parliamentary seats, 10 are currently vacant due to the resignation of eight MPs after the port explosion and the death of two more from COVID-19 complications in recent weeks. Article 41 of the Lebanese constitution mandates that by-elections be held within two months of parliamentary vacancies.

Constitutional breaches aside — Lebanese politicians selectively care about those if and when convenient — there does seem to be a general trend in favor of holding by-elections in the coming months. Whether this trend materializes or remains pure political maneuvering is yet to be seen. The usual suspects have already been denounced by the minister of interior in charge of organizing these elections: COVID scares, logistical hurdles, and cost considerations in a bankrupt country.

By-elections might indeed occur since they come at little cost to the establishment. Given the identity of the 10 MPs — none of them really belonged to the ruling majority — seat reallocation won’t change much in an already dysfunctional parliament. If anything, holding by-elections might actually signal to the international community goodwill and a commitment to the democratic process. Attention should nonetheless remain focused on the 2022 general elections.

For civil society and alternative parties, by-elections could be a double-edged sword. On the one hand, most vacancies are in districts that are relatively more favorable than others to alternative candidates. Moreover, establishment parties may run against each other, hence splitting the traditionally partisan vote. This could give alternative parties a promising springboard for 2022, but also a forum to test out organizational and mobilization strategies. On the other hand, a disillusionment due to low turnout or an inability to coordinate a compact, unified front can easily backfire. If alternative parties cannot achieve encouraging results in places like Beirut’s first district or Metn, the political road ahead may be somber.