End Game Against ISIS will Require Departure of Assad 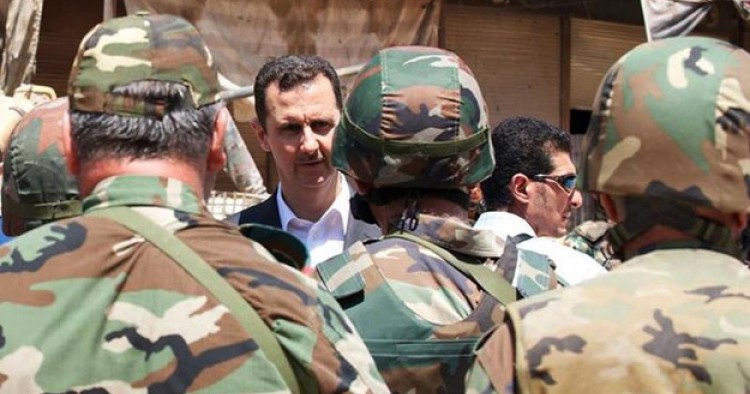 This article was first published on The Huffington Post.

The policies of Syrian President Assad and his regime created the conditions of civil war and state failure on which ISIS has thrived. In the long run, there will be no final defeat of ISIS or other violent extremist groups that prey on extreme popular discontent until he is removed, and a new inclusive order is put in place in Damascus. Ironically, the rise of the Islamic State and entry into the war of the United States and its allies is creating new conditions and calculations on the ground and could create the political conditions for a final settlement of the Syrian crisis.

War is the continuation of politics by other means. Regrettably, attempts at transition and power sharing deals for Syria failed in the Geneva meetings of June 2012 and January 2014, and the war raged on with horrific consequences for the Syrian people. The simple reality that no political resolution was possible without the removal of a divisive leader was recognized in Iraq; the U.S. demanded that Prime Minister Nouri al Maliki be replaced and a power-sharing government be put in place prior to fuller U.S. and allied engagement.

U.S. officials should keep emphasizing that the conditions that have enabled the rise of ISIS were created by the brutal and divisive policies of the Assad regime, and that Washington and its allies are as serious about pushing for a power-sharing transition in Damascus as they are about fighting ISIS. It is also important to reassure the moderate Syrian opposition as well as America's regional allies that while the U.S. is engaged in the fight against ISIS, it recognizes the original source of the calamity in Syria and is committed to bringing about political transition and power-sharing in Damascus.

As the U.S. and its allies deepen their engagement in Syria and ramp up their support for the moderate rebels, this will cause great concern for the Syrian regime's supporters and allies. Six months ago, the regime and its allies were quite content that they had split the opposition, beaten back the core challenge to the regime, quarantined Syria from direct external intervention, imposed a new balance of power in the country in their favor and could wait out the crisis indefinitely. Now they have to contend not only with a surging ISIS but the prospect of a reviving moderate opposition backed by U.S. airpower and the majority of regional states.

The Alawi community is exhausted, having lost tens of thousands of its men to an open ended war that they have not lost but cannot win. The units of the regime's regular and irregular fighting forces have been fighting for three years straight and cannot sustain this pace indefinitely. Hezbollah is stretched to its limits and after Iraqi Shiite militias left Syria back to fight in Iraq, it has lost some towns and villages that it had conquered last year and has had to fight just to maintain its present lines in Syria. Now it also has to contend with ISIS and Nusra incursions into eastern Lebanon.

Syria's external allies, Russia and Iran, are also increasingly alarmed. They welcomed the U.S. exit from Iraq and the Levant in 2011, and are not happy to see the U.S. come back -- especially to Syria. They will be looking for a way to usher the U.S. back out.

Most importantly, if the U.S. and its allies over the next months degrade and push back ISIS and enable the moderate opposition to stand up and start reclaiming ground, this will weaken Assad's political claim on power. He has claimed that there is no moderate opposition to negotiate with, that the opposition are all terrorists, and that he is the main bulwark against extremists.

If the U.S. led plan proceeds properly, it will show that the U.S. and its regional and local allies -- not Assad -- are the main actors against the violent extremists and that there is a rising and credible moderate opposition. For exhausted communities that have supported Assad out of fear of extremists, negotiating with a coalition that has led the war on extremists becomes a more realistic option.

Iranian and Russian officials have often insisted that their interests in Syria do not mean an unequivocal commitment to Mr. Assad and his family, but the Syrian regime has been so tightly designed as the "Assad regime" for the last four and half decades, that it is difficult even for regime supporters to find alternative political pathways. Even Iraq had enough political institutions and political party structures to quickly replace Maliki with another leader of his party and move forward with forming a new government. Assad, father and son, have made it their life's work to make sure that no viable political alternative to them emerges. But members of the regime and the Alawi community, as well as the regime's external supporters, increasingly will have to think of a political way forward without Assad.

Where and when a deal might come about are hard to predict, but current developments are creating conditions that might make it more likely. Regime supporters are exhausted and need a way to end the war while ensuring their security and role in a future Syria; the regime's external allies are alarmed by the new U.S. led intervention, and would be open to a domestic settlement if it helped enable a U.S. withdrawal. The U.S. and its regional and local allies are on record in Geneva and elsewhere that they want a negotiated settlement.

The U.S. and its allies should also reach out to the regime's communal base and emphasize that they are deeply concerned about the security of communities in Syria -- both minorities and majorities; that their fight against ISIS demonstrates this commitment and that guarantees for the safety of all communities in a future Syria will be part of any settlement.

The U.S. should keep pressing the political track even as it pursues the military track. A deal might not be struck in Geneva, or through currently troubled U.S.-Russian relations, but the ongoing escalation is creating new calculations, as well as new opportunities for an eventual conflict-ending settlement. This opportunity, when it arises, should not be missed.

All civil wars eventually end. And a settlement in Syria will not only ease the suffering and start healing the wounds of millions of Syrians, but will also dry up the ground that fuels ISIS and other violent extremist groups.