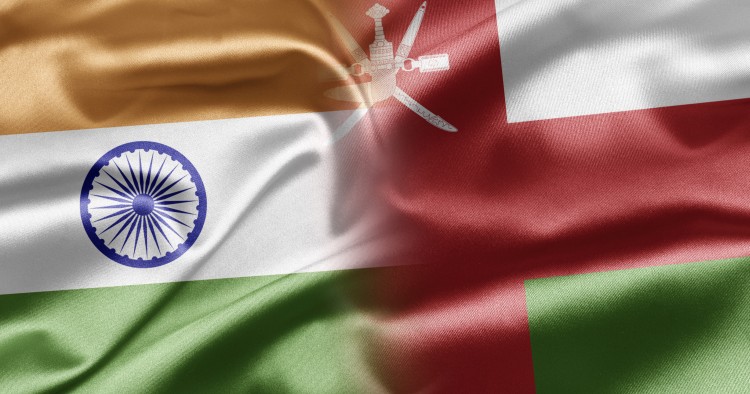 India and Oman are maritime neighbors linked by history and culture. Muscat, the modern-day capital of Oman, has been a strategic nodal point of trade and exchange for centuries. Since the establishment of diplomatic relations in 1953, India and the Sultanate of Oman have developed robust economic relations and people-to-people contacts.

H.M. Sultan Qaboos bin Said of Oman, himself, has a personal connection to India, having received his basic education there. Indians account for the majority of expatriate workers in Oman, They are employed in various capacities,  ranging from construction workers to engineers, and from unskilled laborers to business tycoons.[1] The nearly 700,000 members of the community contribute about $3 billion in annual remittances to the Indian economy.[2] India and Oman are also important trade partners. In 2013-14, for example, bilateral trade exceeded $5.7 billion.[3] Over the past five years, India’s exports to Oman have increased 66 percent.[4]

Coping with dependence on hydrocarbons has long been a strategic challenge for India. During the early 1990s, in order to help meet this challenge, India engaged in vigorous “gas pipeline diplomacy.” In his 1993 visit to Muscat, then-Prime Minister P.V. Narasimha Rao initiated the Oman to India Pipeline (OIP) Project, a plan for bringing gas from Oman. However, the OIP never materialized due to several key obstacles, including lack of a qualified deepwater pipeline repair system, technical inability to lay pipes at 3,500 m depth, and inadequate understanding of seismic activities, among others.[5]

Yet, bringing the India-Oman Deepwater Gas Pipeline to fruition remains very appealing for India, all the more so in light of increasing consumption requirements and the stalled or slow progress in negotiations over the Iran-Pakistan-India (IPI), Turkmenistan-Afghanistan-Pakistan-India (TAPI),[6] and Myanmar-Bangladesh-India (MBI) gas pipeline projects.

Building on the extensive study of the deepwater route of the OIP conducted in the 1990s, the South Asia Gas Enterprise (SAGE) has revived the idea of building a trans-Arabian Sea gas pipeline. SAGE has joined with a global consortium to propose construction of the Middle East India Deepwater Pipeline (MEIDP). The MEIDP is an ambitious $4.5 billion deepwater pipeline beneath the Arabian Sea — bypassing Pakistan — that would cover a distance of 1,300 km. If the project is implemented, MEIDP would transport an estimated 1.1 billion standard cubic feet per day of gas from two hubs (Ra’s Al Jifan in Oman and Chabahar in Iran) to Porbandar in India,[7] with the possible construction of a spur line to Mumbai at a later date.[8]

According to SAGE, the OIP is now technically feasible and commercially viable. Furthermore, the implementation of the Joint Comprehensive Plan of Action (JCPOA), or so-called “Iran nuclear deal,” has cleared the way for Iran’s participation. Natural gas made available to India through the OIP would provide cost savings in liquefaction, regasification, and transportation; provide access to additional export markets; and mitigate the geopolitical tension that might arise were the gas to be transported by pipeline overland.[9]

Another potentially valuable addition to the evolving India-Oman relations is the Oman India Joint Investment Fund (OIJIF), a mid-market private equity fund backed by the State General Reserve Fund of Oman (SGRF) and the State Bank of India (SBI). The OIJIF is divided into phases, or funds. The initial fund (2010-11) raised and invested $100 million. It did not seek third-party capital; it was wholly sponsored by SGRF and SBI. Importantly, OIJIF-I completely deployed its $100 million allocation by the end of 2014,[10] and generated a return of about 47 percent of the total drawdown capital.[11]

The second fund, which hit a $250 million close in May 2016, aims to eventually raise $350-400 million.[12] Fund 2 has for the first time raised external capital from domestic financial institutions including private and public sector banks and insurance companies. In this phase, OIJIF plans to invest the corpus by the end of 2017, employing the same mid-market strategy.

Chemical fertilizers have played an important role in India’s agricultural productivity. However, much as with energy and investment, the demand-supply gap for fertilizers has widened in recent years, leading to increasing dependency on imports. Oman is one of India’s top five sources of fertilizers. (See Table 1.)

The inauguration of the Oman India Fertilizer Company (OMIFCO) in 2006 was an important milestone in the development of India-Oman cooperation in this sector.[13] OMIFCO was established jointly by the governments of India and Oman to operate an ammonia and urea fertilizer manufacturing plant in Sur industrial area of Oman. The plant has a production capacity of 1,750 tons per day of anhydrous ammonia and 2,530 tons per day of granular urea.[14]

The facilities at OMIFCO were built with an investment of $968 million “to build facilities with 1.65mt/yr of urea and 350,000t/yr of surplus ammonia capacity,” and the venture is considering an expansion of another one billion dollars aimed at doubling its production capacity.[15] India’s agreement with Oman allows for the purchase of OMIFCO’s total production output for 15 years at pre-determined prices.

Oman accounts for 5.26 percent of India’s fertilizer imports. India imports 8 MT of urea, a quarter of which is supplied by OMIFCO.[16] Furthermore, it is important to note that India’s fertilizer imports from Oman grew by 39.3 percent in 2015-16 as compared to the previous year.[17] OMIFCO has played a key role in this upward trajectory. In fact, OMIFCO achieved 128 percent capacity utilization in early 2016.[18] Commenting on the significance of this project in his response to a Parliamentary question, Minister Shrikant Kumar Jena, the Minister of State (Independent Charge) in the Ministry of Chemicals and Fertilizers stated:

The LTP of granular urea is much cheaper in comparison of the prevailing prices in the international market. The imports from OMIFCO are resulting into as great savings to the Government exchequer on account of subsidy on fertilisers. Since the UOTA with OMIFCO is valid up to July 2020, it will certainly contribute in meeting part of the local demand of urea during the Twelfth Five Year Plan period.[19]

The Sultanate lies at the crossroads of the Arabian Sea and the Indian Ocean in close proximity to the world’s busiest shipping lanes. Developing a logistics hub that capitalizes on Oman’s strategic location represents another potentially significant element of India’s evolving engagement with the Sultanate. For hundreds of years, Omani ports have served as crucial points of maritime trade connectivity.[20] Of Oman’s eight currently operating seaports, India has shown especially keen interest in the ports at Duqm and Sohar.

The Port of Duqm is situated on the southeast coast of Oman, overlooking the Arabian Sea and the Indian Ocean. Sohar Port and Freezone is a deep-sea port and free zone located midway between Dubai and Muscat. The government of Oman is developing Duqm Port along with Special Economic Zone (SEZ) as a hub for regional economic activities.[21] Major Indian firms such as Jindal and L&T already have a presence in Sohar. In late 2016, Oman sought Indian investment in the development of the Port of Sohar and of a logistic hub connecting India-Iran-Oman, as a gateway to the Arab and Central Asian regions.[22] In addition to demonstrating interest in these ports, India also recently reaffirmed its commitment to join with Japan in developing the Iranian port of Chabahar, raising the prospect of the eventual forging of a maritime logistics chain linking Duqm and Chabahar ports.[23]

The four initiatives discussed in this essay demonstrate that India and Oman are engaged in vigorous efforts to broaden and deepen their economic relations. India and Oman should seek to leverage the goodwill accumulated by such initiatives to create mutually beneficial competitive advantages.

[5] As per the SAGE website: http://www.sage-india.com/, SAGE, promoted by New Delhi-based Siddho Mal Group, in Joint Venture with a UK-based Deepwater Technology Company, is working to create an Energy Corridor, which reduces the vulnerabilities posed by land-based pipeline projects passing through Pakistan (e.g., IPI and TAPI).

[20] An interesting example is the case of the Jewel of Muscat, which is a replica of a 9th century sailing ship whose wreckage was discovered off the Indonesian coast of Belitung in 1998. It contained treasures and ceramics from China and Arabia. The government of Oman created this replica which sailed from Oman in 2010 via India, Sri Lanka and Malaysia to reach Singapore, using the 9th century navigation technique. It was deemed to be a public diplomacy initiative by Oman. The first author of this article, Faisal Ahmed, who also presented a paper on this issue at a conference in Jawaharlal Nehru University, New Delhi, would like to specifically thank Oman’s then Ambassador to India, H.E. Sheikh Humaid Al-Maani for discussing this public diplomacy initiative with him while the ship was on its way from Oman to India