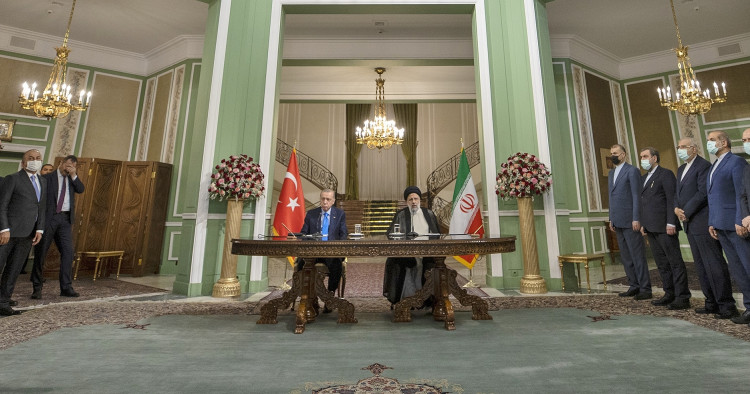 During his most recent visit to Tehran, on July 19, Turkey’s President Recep Tayyip Erdoğan and his Iranian counterpart, Ebrahim Raisi, vowed closer economic cooperation. Both sides again repeated their pledge to increase bilateral trade to $30 billion per year. This figure was first mentioned back in 2018, during Erdoğan’s last trip to the Iranian capital, along with plans to unveil an economic road map for cooperation.

If such a road map was ever drawn up, it has either not worked or not been followed so far. In 2018, Iranian-Turkish trade topped out at around $10 billion per year; it stood at around $5 billion in 2021. Nor have Tehran and Ankara moved much closer on the issue of Syria than they were in 2018. They are still rivals for influence in that war-torn country, and they need to carefully regulate their competition for influence not only in Syria but also in Iraq, the South Caucasus, and elsewhere in the broader region.

After returning from Tehran last month, Erdoğan announced that Turkey would boost oil and natural gas imports from Iran. But a number of obstacles — including U.S. sanctions on Iran — stand in the way. Still, closer economic ties have the potential to lessen Iranian-Turkish zero-sum regional competition.

During former Iranian Foreign Minister Javad Zarif’s visit to Istanbul in late January 2021, the Iranian and Turkish sides officially declared to be seeking common ground on and solutions to a number of policy challenges, including the future of Syria and the stabilization of the South Caucasus through a multilateral effort. Meanwhile, the Turks also publicly urged Washington to remove sanctions on Iran.

Yet despite all these purported points of mutual interest, the notion that there is any push toward an Iranian-Turkish partnership is premature. Such pledges have been made many times before, and remained unfulfilled, since Erdoğan took power in Ankara in 2003.

Take, for example, Turkey’s stance on trade with its large southeastern neighbor. Bilateral trade declined precipitously during 2017-2020, and U.S. sanctions were not the main reason behind this drop. In fact, the Turks used the Americans’ sanctions on Iran as a pretext to reduce Turkey’s large energy imports from the Islamic Republic, which Ankara all along found to be too expensive. Meanwhile, the COVID-19 pandemic undoubtedly also had a negative impact on trade as the shared land border was closed and overland international commercial activities ground to a halt for much of 2020.

Turkey’s biggest imports from Iran, which long gave Tehran an advantage and a surplus in trade with Ankara, were natural gas and crude oil. This trade should theoretically not have been impacted by border closures, yet it was reduced nonetheless. In September 2020, the presidents of Iran and Turkey again recommitted to increasing bilateral trade to $30 billion a year.

This latest policy goal was announced at a time when mutual trade volumes were, in fact, fast declining. In the first six months of 2020, trade between the two countries fell to about $1 billion — a 73% decrease. This drop had begun with the arrival of Donald Trump to the White House and the reimposition of American sanctions on Iran a year later. Since 2017, Iran’s exports of both natural gas and crude oil to Turkey has contracted sharply.

But Tehran did not consider Trump’s policies to be the root cause of the deteriorating trade with Turkey. In fact, the Iranians interpreted Turkish actions as a deliberate effort to decrease Turkish dependence on pricey Iranian gas and oil imports. When, in early 2020, Kurdish militants reportedly blew up a section of a gas pipeline from Iran to Turkey, Tehran was quick to offer to jointly repair the damaged pipeline. The Turks ignored this Iranian offer, however. Iran’s oil minister, Bijan Zangeneh, uncharacteristically (for him) responded to this rebuff by accusing Ankara of being an irresponsible partner.

In a further twist, while the Turks refused to restore gas purchases from Iran, they increased liquified natural gas (LNG) imports from the United States. For the first time in many years, Turkey achieved a trade surplus with Iran. The Iranian side does not currently have any alternative buyers lined up that could replace Turkey’s long-held role as the largest customer of Iranian natural gas.

Iranian-Turkish trade and economic cooperation is significant because it has, since 1979, been the all-important platform on which otherwise often tense bilateral relations could survive. With trade and economic ties now weakening, Iranian-Turkish geopolitical rivalry could sharply re-intensify. Trade in oil and gas is one factor to watch. The other issue centers on the ability of Tehran and Ankara to compromise, if not collaborate, on planned regional energy and transit infrastructure.

Over the course of the last 20 years or so, fears of Russia’s reaction to an assertive Iranian policy in the South Caucasus had kept Tehran’s profile in the region relatively low, even as Turkey itself was busy recalibrating its approach. Most notably, the Turks increased cooperation with Azerbaijan in the field of military-to-military relations while working closely with Baku to transform Turkey into Azerbaijan’s principal transit route for its natural gas exports to Europe.

On Dec. 31, 2020, Europe received its first natural gas from Azerbaijan via the Southern Gas Corridor (SGC). The 3,500-kilometer-long chain of pipelines transports gas from the Shah Deniz field in Azerbaijan’s sector of the Caspian Sea, via Georgia and Turkey, to Italy. Ankara supported this strategic energy project and helped Baku to secure European political and financial support for it.

In contrast, Ankara has, since the early 1990s, stalled whenever Tehran requested Turkish cooperation in providing a pipeline transit route for Iranian gas to Europe. At this point, Iran has two options. It can give up on the European gas market entirely and focus on markets in Asia. Alternatively, Tehran could reach an agreement with Baku and Ankara to feed Iranian gas into existing pipelines that the Azerbaijanis have already built and that travel westward to Europe through Turkish territory.

Along the same lines, Ankara has dragged its feet on holding negotiations with Tehran about the possibility of renewing the 25-year-old contract — set to expire in 2026 — that supplies gas from Tabriz to Ankara via a 2,577-kilometer pipeline.

Iranian officials maintain that Turkey is interested in continuing to buy Iran’s gas; but the recent discoveries of gas fields in Turkish sectors of the Black Sea and the Mediterranean raise the question about whether Ankara will need Iranian volumes as much as before. After Russia, Iran has been Turkey’s largest single provider, but the cost of Iranian volumes is higher than for Russian gas. Turkey has for the last 10 years sought repeatedly, but unsuccessfully, to secure a lower price for the gas it imports from Iran.

Tehran anticipates that Ankara will use various recent developments to either discontinue gas imports from Iran or ask for a considerable discount. This will badly hit trade volumes between the two states. Not only is Iran irked by Turkey’s stance on Iranian gas, but the Iranians are additionally peeved by what they regard as Turkish opportunism over U.S. sanctions on Iran.

In the 1990s, Ankara successfully exploited U.S. sanctions on Iran to sideline Tehran from several key regional infrastructure projects. Most notably, any proposals for pipeline routes for Caspian oil and gas to go through Iran were effectively vetoed by Washington. This is why the Baku-Tbilisi-Ceyhan pipeline was built to take Azerbaijani oil to Turkey even though a route through Iran to the Gulf and on to global markets would have been the shorter and commercially cheaper option. The same dynamic is at play today. The latest war in the South Caucasus — the 2020 Second Karabakh War — has created fresh possibilities for new regional infrastructure projects. In this environment, Turkey wants to maintain its role as a transit hub for energy and trade. But the Iranians are deeply concerned about again being left out, as in the 1990s.

Thanks to its self-inflicted international isolation, the Islamic Republic of Iran’s advantages due to its geographic location are presently largely untapped as far as regional transportation and energy infrastructure are concerned. The Iranians could turn the tables, particularly against the Turks, by reaching compromises with the Americans and, thus, reducing the pressure that U.S. sanctions put on Iran’s economy. But in the absence of such a deal with Washington, Tehran is forced to sit back and hope for the best. Its greatest hope is that Russia will not want to see Turkey become a more dominant regional player, since Moscow also has immediate interests in the future of transportation and energy networks crisscrossing western Asia. But crucially, Russia can control Iranian policy calculations in ways it cannot when it comes to Turkey.

Tehran and Ankara will likely continue to publicly speak of “brotherhood” and cooperation but then proceed to compete against each other in various fields. This is not a new phenomenon in itself. Yet successful attempts to reverse the fast-shrinking trade relations between Iran and Turkey, which have historically underpinned an otherwise competitive relationship, could be a catalyst for less restraint and more overt rivalry. For example, Turkey’s hitherto rather tolerant stance toward Tehran’s nuclear program could harden. Turkish-Iranian competition in Syria, Iraq, and elsewhere in the Middle East could become more pronounced. Or, at the very least, Turkey may demand a lower price for Iran’s gas if Ankara is to agree to extend the contract beyond 2026. A number of different factors can pull the two countries’ multi-faceted relationship together or apart. But what is certain is that Erdoğan’s latest visit to Tehran was meant to manage their inevitable short-term competition.

Alex Vatanka is the director of the Iran Program and a senior fellow in the Frontier Europe Initiative at the Middle East Institute in Washington. His most recent book is The Battle of the Ayatollahs in Iran: The United States, Foreign Policy, and Political Rivalry Since 1979. The views expressed in this piece are his own.